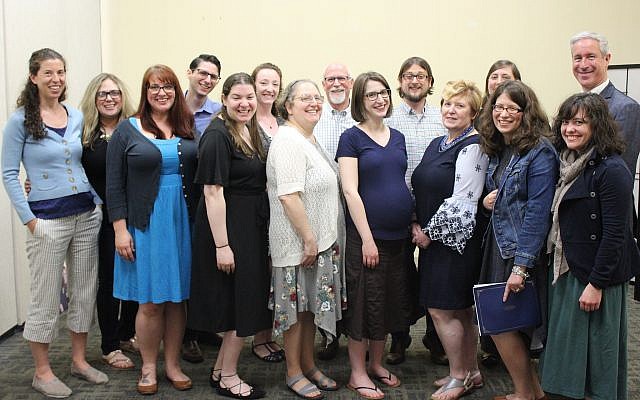 Rabbi Danny Schiff, Foundation scholar of the Jewish Federation of Greater Pittsburgh, is back in town after a two-year COVID absence.

The Australian-born educator and rabbi typically spends half of each year in Pittsburgh and half in his adopted homeland of Israel, having made Aliyah in 2009.

Schiff has served as Pittsburgh’s Foundation scholar since 2015 and has built a loyal audience anxious to attend his classes and other speaking engagements. Until the pandemic pause made travel all but impossible, the rabbi taught the Pittsburgh Jewish community in person. That changed two years ago.

“I had never taught on Zoom before March of 2020,” Schiff said. “We moved the entire program online rapidly and learned how to make it work.”

Schiff pointed to the popularity of two virtual courses as proof that the shift was successful. He said that the continuing legal education courses he teaches six times a year have attracted up to 100 people online. He also taught a course in memory of Rabbi Lord Jonathan Sacks, who died in November 2020.

“We created a 20-session course that was fully subscribed with 40 participants within 24 hours,” Schiff said, noting that a second 20-session course was offered, and its virtual seats were filled within 72 hours.

The pandemic, Schiff noted, created a thirst for quality virtual learning, and by offering courses online the Foundation was able to reach more people than ever. Ninety-five percent of those students, he said, were in Pittsburgh, but some were snowbirds tuning in from somewhere warm, or had heard about the classes some other way.

“I think the online environment actually improved what we were able to do,” Schiff said.

COVID travel restrictions have largely loosened, and Schiff said he expects to return to his usual routine of spending six months in Pittsburgh and six months in Israel. For the time being, though, more than 75% of the Foundation’s educational offerings will remain online.

“We want to respond to what the community wants to do with learning because I believe that every modality has its pluses and minuses,” Schiff said. “From an educational perspective, it’s stronger to learn together because of all that yields. But if we get a lot more people engaged in adult learning because of the convenience of the online experience, then the net gain for Jewish learning is considerable.”

While Schiff is happy to meet the community’s needs for education no matter where they are — in either the physical or virtual space — he also believes the future of Jewish life must also include gathering in person.

“I think it’s important that in the area of synagogue and community, especially when it comes to praying, that we stress the physical and come together for those opportunities,” he said. “On the other hand, education and organization lends itself rather well to the online experience, and I think we’re going to see the predominant slice of education happen more online than ever before.”

Andrea Chester has attended Schiff’s courses both in person and virtually.

She first started taking classes as a way to keep in touch with a friend who had taken some of the rabbi’s courses and told Chester how much she enjoyed them.

After the first class, Chester, who attends Shabbat services at different Chabad Centers in Pittsburgh, said she was hooked.

“He’s very engaging,” she said of Schiff. “He’s respectful of different opinions. He asks questions. We study primary sources. I think the best testament to how much people love his classes is that he draws a crowd from diverse Jewish backgrounds.”
For Chester, Schiff proved his merit as a teacher following the massacre at the Tree of Life building.

She was taking a class set to meet Monday, Oct. 29, just two days after the shooting. She said that she and her classmates were unsure what would take place.

“Rabbi Schiff said, ‘This situation is so extraordinarily unusual we’re not going to talk about the lesson today. We’ll talk about what you experienced and how you felt,’” she remembered. “He’s not a touchy-feely person — he’s usually very scholarly and serious — but this was massive, and he knew we needed that space to talk.”

Chester said Schiff set the tone by telling the class that learning is what Jews do in response to everything — the good in life and the tragedy.

South Hills resident Paul Barkowitz began taking classes with the rabbi during the pandemic. He said Federation offered some of the courses free.

“I liken it to a drug dealer who offers the first course for free,” Barkowitz said with a hint of humor in his voice. “I was hooked. It was fabulous.”

Eventually, Barkowitz, who had retired shortly before taking his first virtual course with Schiff, began paying for classes. He said the classes he attended were his gateway into Federation life.

Barkowitz, who is a member of Beth El Congregation of the South Hills, said that Schiff’s courses are challenging in a positive way.

“He gets people thinking,” he said. “I always feel like I come out smarter than I was before. He asks questions, he probes a lot. He demands interactivity and it’s really high quality.”

Janis Warren has a daughter who works for Pittsburgh’s Federation. Warren lives in Maryland, so all her experiences with Schiff have been online.

She said Schiff’s pedagogy makes up for the lack of a common physical space.

“He really makes you feel like it’s a community,” Warren said. “I don’t know anyone else in the group, but he set it up [saying], ‘Even if you don’t know anyone at the start of this, you’ll know everyone by the end,’” she said.

Like Barkowitz and Chester, Warren said she immediately recognized something unique about Schiff.

“I called my daughter after the first class and said, ‘I don’t know if I should say this because I’ve only taken a one-hour class with him, but I think he’s one of the finest teachers I’ve ever had.’”

In the end, Schiff said, virtual or in-person, his primary question is the same: “How do we make sure that Jews are engaged with their Judaism in a way that can be described as serious and that sparks commitment?” PJC