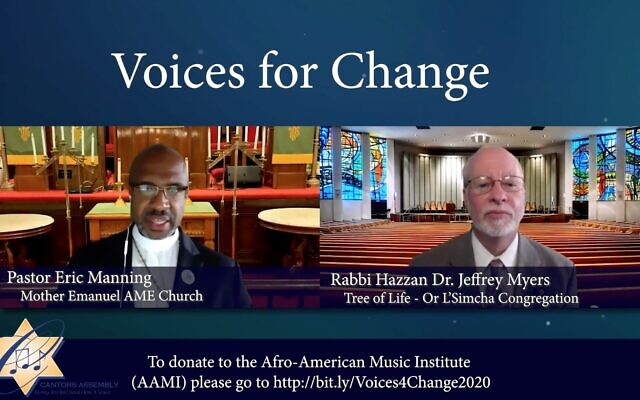 Screenshot from the video

They sang Richard Smallwood’s “Total Praise,” based on Psalm 121 and popular within both the Jewish and Black communities. Smallwood himself conducted in the video.

Myers and Manning became friends after the massacre at the Tree of Life building during which 11 congregants were murdered and two seriously wounded. Manning came to Pittsburgh several days later to comfort the Jewish community of Pittsburgh. Three years earlier, at Manning’s own church, nine people were killed by a self-proclaimed white supremacist during a Bible study.

The two introduced the singing in the video and spoke about partnership between the Black and Jewish communities afterward.

Manning described Jewish support during the formation of the NAACP. “It wasn’t just people of color coming together but it was also in conjunction with a lot of our Jewish brothers and sisters,” he said. “I think if we can tap back into that same spirit of unity, that same spirit of working together, I believe we could accomplish a lot more in this day and age.”

Myers cited national statistics showing disproportionate attacks on the Jewish and Black communities in the U.S. “This is a perfect time to continue to grow that partnership because there’s so much we can do together to become anti-racists,” he said.

Hazzan Alisa Pomerantz-Boro, the immediate past president of the Cantors Assembly — which is affiliated with the Conservative/Masorti movement — came up with the idea of the collaborative video after George Floyd was killed last spring. Pomerantz-Boro said she has seen how Black congregants at her synagogue, Congregation Beth El in Voorhees, New Jersey, have been treated unfairly based on the color of their skin.

“As cantors, we have to use our voices in meaningful ways,” she said.

After coordinating with the Cantors Assembly, she reached out to Myers, knowing that he had a relationship with Manning. “The two of them would be role models,” said Pomerantz-Boro, comparing Myers and Manning’s friendship to that of Martin Luther King Jr. and Abraham Joshua Heschel.

The video asks for donations to the Afro-American Music Institute, based in Pittsburgh. It was chosen, in part, because Pittsburgh was the site of the most violent anti-Semitic attack in the history of the U.S. The money will go directly toward scholarships for the boys choir and senior programs.

“Music has the power to heal and bring comfort in a way unlike words alone,” said Pomerantz-Boro. “So by giving the gift of music to underserved populations, it can elevate their lives in a meaningful way.” PJC