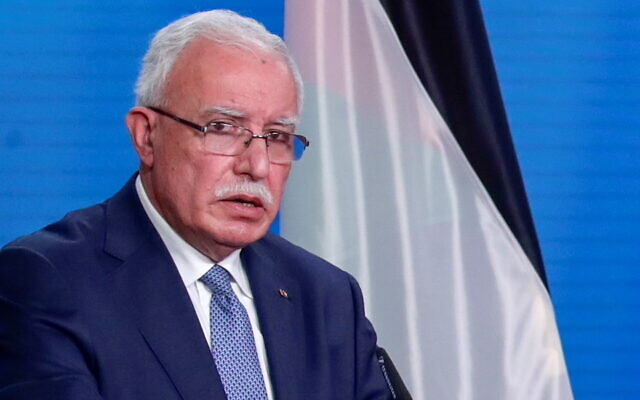 (JTA) — In a stark contrast from the last few years of the Trump administration, the Palestinian foreign minister said Saturday that the Palestinian Authority is ready to restart the process of negotiating a two-state solution to the Israeli-Palestinian conflict with Israel and the incoming administration of President-elect Joe Biden.

“We are ready for cooperation and dealing with the new U.S. administration, and we are expecting that it would re-draw its ties with the state of Palestine,” Riyad al-Malki said, according to an Associated Press report.

Al-Malki made the announcement at a news conference in Cairo with the foreign ministers of Egypt and Jordan. He added that the PA would like those two countries to be at the center of the negotiation coordinating process.

The stance signals an expected shift in U.S.-Palestinian relations under Biden. While President Trump’s State Department has cut U.S. aid payments to the Palestinians and signaled support for Israeli settlements, Biden has maintained that he would assume a more traditional posture in aiming to negotiate a two-state solution.

In September, Palestinian President Mahmoud Abbas called for an international conference to address the ongoing conflict in 2021. PJC