Just ask Stephanie Shropshire, who has donated that much breast milk — the equivalent of about 800 baby bottles — to the Mid-Atlantic Mothers’ Milk Bank in Pittsburgh since her third child, Lev, was born a year ago.

Though she found herself producing much more breast milk than Lev needed, Shropshire still managed to collect the sizable haul while only pumping twice a day.

“It’s a weird thing to have so much milk,” she continued, “but it’s a good thing — it’s our little mitzvah.”

Shropshire discovered that she produced large amounts of breast milk six years ago when her first child, Micah, was born in New York.

At the time the Pittsburgh native, who grew up in Squirrel Hill and moved to New York City to attend Parsons School of Design, didn’t know about milk banks, but donated “a few hundred ounces” to the mother of a local boy diagnosed with Down syndrome. She donated again when she was breastfeeding her second child, Sammi, who is now in pre-kindergarten at Community Day School.

“With Lev, I was producing the day he was born way more than he could eat,” she told the Chronicle. “At least it’s going to good use.” 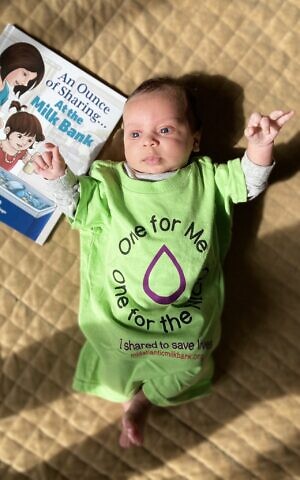 Denise O’Connor is thrilled by donors like Shropshire. O’Connor founded and serves as executive director of the Strip District-based breast milk bank to which the Greenfield mom donates her breast milk — all of it collected from a dairy-, gluten- and fish-free diet.

O’Connor stressed it’s not about quantity; whether it’s 1,000 ounces or 150, the milk bank’s minimum donation, everyone can make a difference.

“Every single drop is impactful,” O’Connor told the Chronicle. “I cannot overemphasize the impact they’re having with these little ones.”

O’Connor, a certified lactation consultant, laughed when saying the mission of her milk bank, which collects about 25,000 ounces of breast milk each month for babies in more than 40 hospitals, “is not a pumping contest.”

“Milk banks are so vitally important to maximize the health outcomes of our most vulnerable patients,” O’Connor said. “We want all moms who have more milk than their babies need to know about us.”

Shropshire said she has to go through a few steps to keep donating, mainly submitting bloodwork every six months and responding to inquiries about the medications she takes and her diet.

But she said it’s worth it, especially when the breast milk bank sends her a note saying some of her donated milk was used for a NICU baby in a local hospital.

She also loves the support she’s received from other mothers here in Pittsburgh. Though the milk bank provides bags to collect her breast milk, local mothers have been donating more bags to help offset the sizable need — sometimes complete with notes of encouragement.

“It’s kind of a community thing,” Shropshire said. “They feel it’s their part to be able to help.”

Shropshire, who has three siblings, doesn’t know if she inherited her ability to produce extra milk from her own mother. In fact, she said she was fed formula as a baby.

Though Shropshire is pleased with the quantity she’s donated, she admits she would love to know which donor has given the most — and if she’s close to the top spot. (O’Connor said her bank does not keep those records.)

As of now, this super mom said she doesn’t know how much longer she’ll keep it up.

“I guess what’s next just depends on Lev.” PJC