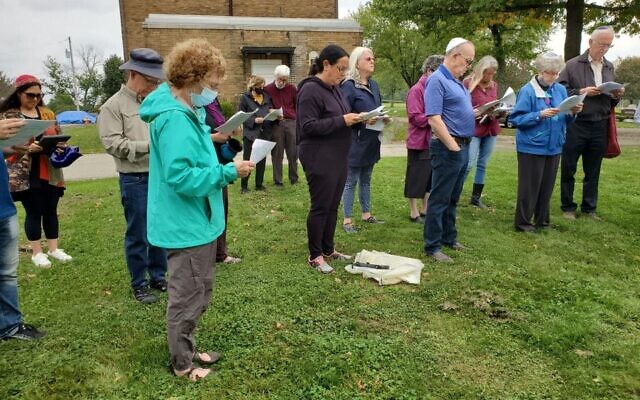 On March 6 he will be honored by the New Community Chevra Kadisha.

“Without him, there would be no New Community Chevra Kadisha,” said Pat Cluss, a co-founder of NCCK.

When Cluss, Malke Frank and a handful of other community members reached out to Zinner and his national organization in 2004 about starting a Jewish burial society that would complement Pittsburgh’s established Orthodox group, Zinner provided hours of education, insight and encouragement. As the nascent NCCK cohort blossomed from five members to 62, Zinner continued returning to Pittsburgh from his Columbia, Maryland, home to offer instruction, training and guidance.

After Oct. 27, 2018, when 11 Jews were murdered inside the Tree of Life building — including NCCK member Dr. Jerry Rabinowitz — Zinner was again in Pittsburgh, supporting the group in its duties as a Jewish burial society.

Frank estimates that since 2004 NCCK has performed 1,000 taharot (ritual purifications of the deceased).

The number is significant, Cluss explained, because many of those deceased — or their living family members — might not have adopted certain Jewish burial practices if not for NCCK.

“David educated the more liberal Jews, who didn’t know from tahara,” Frank said. “It was a line item for them.”

Before the NCCK establishment, community members who weren’t knowledgeable of Jewish burial practices might not have understood the reason for a tahara, or why tachrichim (simple white burial furnishings) were required, Frank continued. While Jewish cemeteries may have insisted on taharot for burial, Zinner helped NCCK explain to the larger liberal Jewish community the significance of Jewish burial practices, she said.

Zinner said he’s humbled being honored by NCCK, and he’s optimistic about the future of chevra kadishas despite a changing Jewish landscape.

The Jewish world has dramatically shifted from the start of the 21st century, but that doesn’t mean that Jewish burial societies are a thing of the past, said Zinner, 71. The next generation may not be “gravitating to synagogues like our parents did, but we are seeing alternative groupings around mikvahs or minyans. And the chevra kadisha fits around that next generation model very nicely.” 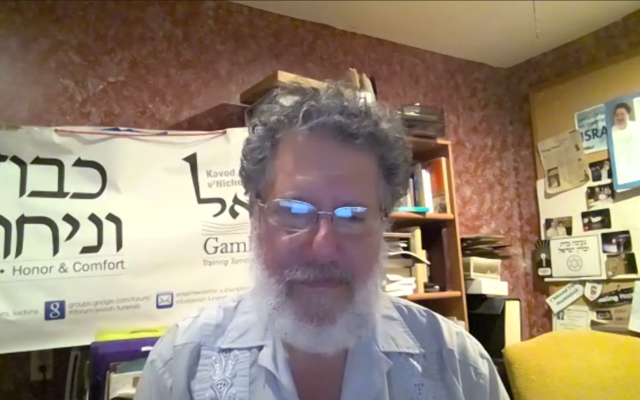 In many ways, the desire to break from established Jewish organizations isn’t very different from what Zinner observed almost 50 years ago.

Following the 1960s, there was this “do-it-yourself” mentality that had grown, Zinner said.

Before those years, chevra kadishas typically consisted of Orthodox members, but by the 1970s, “a different kind of movement arrived,” he continued. “The people who were doing it
didn’t want to know just how to do it, but why we do what we do, and where it came from. There was a lot of dialogue and excitement about learning this ritual.”

In non-Orthodox seminaries, though, rabbinical students weren’t necessarily learning about these rituals, Zinner said. Consequently, non-Orthodox congregants couldn’t always rely upon their rabbis for advice about a particular Jewish practice.

Zinner said he was pleased to welcome a few hundred people to that first gathering, but the real achievement was evidenced by the texts those people had created.

Attendees of the first conference brought along their self-produced handbooks or manuals related to Jewish burial and bereavement, Zinner said, and the conference allowed members to make Xeroxes of Xeroxes and ensure that for $10 everyone got a copy of everyone else’s booklets.

Over time, the collected texts — and technology — developed. Cutting and pasting became easier, as did including Hebrew fonts. Communities from around the country learned from each other, and several of their combined efforts are evidenced by the manuals and liturgies included on Kavod V’Nichum’s website, Zinner said.

Important works, including “Chesed Shel Emet” by Rabbi Stuart Kelman and Dan Fendel, were published during the past 20 years, but one of the major accomplishments from this period was the bonds built between communities across North America, Zinner added.

“It’s important to plan and discuss what you want to happen at the end of your life, and that includes everything from a physical will to an ethical will, to talking about your funeral and where you’re going to be buried,” he said.

Everyone — even those who are already members of Jewish burial societies — should realize that a chevra kadisha can do more than just the tahara ritual. Whether it’s coordinating shemira (watching over a deceased body from the time of death until burial), arranging meals for community members or leading prayers during the week of shiva, Jewish burial groups have an opportunity to aid their communities in meaningful ways, Zinner said.

“Everyone should be comfortable volunteering to be part of the chevra kadisha,” Zinner said. As a society in general, “we’ve been conditioned to be afraid of death,” but there are many tasks that “don’t involve touching a dead body.”

And for those who do the physical work of ritual purification, there’s no need to be “muscular and big and strong,” Zinner added. “There are plenty of 4-foot-5-inch people doing taharas.” What’s essential to know, is that “everyone can do it or be involved in some way,” he said. “It’s a really important mitzvah for every community to do.” PJC