Paramount to Jewish burial is Taharah, the act of washing and purifying the deceased. So when pandemic-related shutdowns began in March 2020, members of the New Community Chevra Kadisha made a difficult decision. Given fears of COVID-19 transmission, NCCK members stopped traveling to funeral homes and performing the sacred act of Taharah. Instead of physically washing and purifying a body prior to burial, NCCK members gathered on Zoom and performed Taharah Ruchanit, a distanced and spiritual service of readings, song and prayer, with men tending to men and women to women.

On Oct. 3, 2021, NCCK members traveled to Beth Shalom Cemetery in Shaler Township to amend and complete those Taharah Ruchanit. Standing side-by-side, NCCK members recited biblical and Talmudic passages, chanted Hebrew phrases, recited names of the deceased and poured water for each person who at the time of their demise was unable to be washed according to Jewish tradition. The 40-minute ceremony was organized by Dr. Jonathan Weinkle, who helped arrange a six-page packet of materials.

As critical as it was to recite liturgy similar to what would have been read during a pre-pandemic Taharah, there needed to be an aspect of historical context and forgiveness, Weinkle said.

So, along with publicly stating NCCK’s rationale for adopting Taharah Ruchanit, the group offered an apology: “While the decisions we made were taken with every consideration of pikuach nefesh, saving lives from danger, they nonetheless had consequences that made many of us feel we, and the meitim (deceased) we cared for, had lost something precious. It is to acknowledge this loss that we gather here today.” 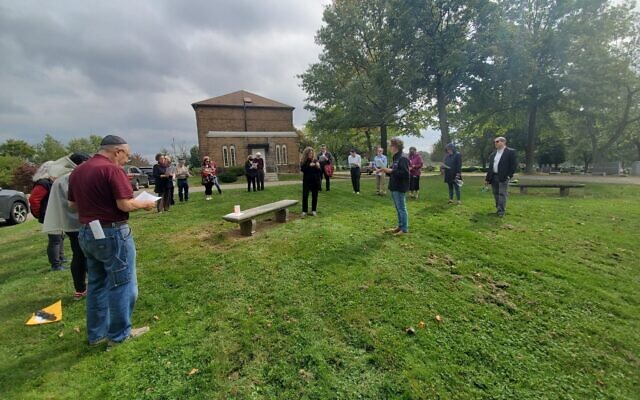 Jewish burial is often called chessed shel emet, a true kindness. Washing a body, purifying it and placing shrouds on the deceased is performed by the living with no ability for repayment. When those acts of kindness are completed “in some diminished way it feels like you’re cheating somebody out of something,” and because the deceased were deprived of optimal Jewish burials, something they deserved as community members, “that’s the reason to ask for forgiveness,” Weinkle said.

NCCK members reiterated this sentiment by publically reading: “We, the Chevra Kadisha, ask your forgiveness for each departure we had to make from traditional practices in preparing your body for burial. On the road, up from Egypt, and through the wilderness, we have done our best to serve you, to be with you and to give you the burial befitting a child of Israel. We pour this water on your grave as a tikkun and completion, as a final act to bring purity and love to your transition.”

Weinkle then distributed a list with names of more than 100 people who received Taharah Ruchanit. NCCK members took turns reciting each name before pouring fresh water from jugs onto the cemetery’s ground — spilling water onto the earth, one person at a time, was intended to mimic the act of shoveling at a funeral. Before disbanding, NCCK members recited the Mourner’s Kaddish.

Rabbi Doris Dyen, whose involvement in the group dates back more than 12 years, described the Oct. 3 ceremony as a rare occurrence.

It’s unusual to stand in a cemetery and say “It’s so good to see you,” but after almost two years of not being able to work the way we do “day in and day out, month in and month out, year in and year out,” it’s powerful to stand together and “hear the murmur of other voices,” Dyen said.

Patricia Cluss, who co-founded NCCK in 2004, agreed it was comforting being with others after such a difficult period.

Hours before the afternoon gathering, NCCK members who were unable to attend reached out to Cluss with messages of solidarity.

“Everybody feels connected to this, to our experience last year and to this particular liturgy,” Cluss said. 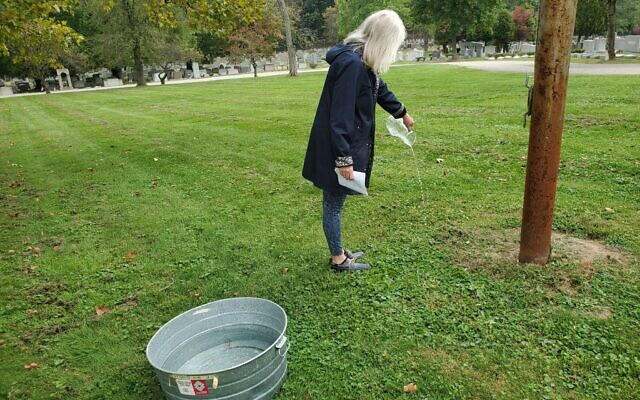 For Lucas Grasha, the Oct. 3 service was a chance to reconnect with NCCK members he barely knew. Grasha, 25, joined the group in February 2020. After attending an NCCK dinner in March 2020, Grasha largely connected with other members digitally for the next 15 months.

Coming together to honor the deceased is “really impactful for us because we have not had that physical connection, and we can at least repair some of that loss,” he said.

Grasha is one of NCCK’s youngest and newest members. Joining the group was spurred by an intimate awareness of mortality. At the age of 20, Grasha lost his mother. One year later, his grandmothers died one month apart.

“That connection with a very visceral understanding of death really motivates me,” he said. “I basically just want to return that sort of mitzvah and favor to people who have passed on.”

Standing feet away from Grasha was Forest Hills resident Marcie Barent. One week prior to Oct. 3, Barent reached out to Cluss and asked about membership in NCCK. Barent said she’d been aware of the Taharah ritual for years and was drawn to its practitioners’ intentionality.

Cluss invited Barent to join the group and attend the service. Barent, alongside other NCCK members, participated in the readings and pourings. At afternoon’s end, she introduced herself to those nearby and thanked them for welcoming her attendance.

“I was pretty nervous about coming,” she said. “It can be a very emotional thing.”

The service, she said, gave her pause. One of the names read was of a high school classmate who Barent didn’t realize had died.

Before exiting the cemetery, Barent chatted with other attendees. She reflected on NCCK’s work and her ability to join the group in its quest to aid the deceased.

“It's gonna be a real honor for me,” she said. PJC