For nearly seven months, members of Pittsburgh’s two Jewish burial societies have grappled with competing interests: Jewish tradition dictates both the responsibility of respecting the dead and the prioritization of human life. When the pandemic necessitated altering rituals in order to ensure its members’ health, chevra kadisha members were pained.

“If you're on the chevra kadisha, you do it because you believe in it and because of love of the mitzvah, you don't do it without conviction,” said Stefanie Small, a 19-year member of Pittsburgh’s Orthodox Jewish burial society. “The chevra kadisha does things with all of their heart and soul, and it hurts us when we can't do things properly.”

When the pandemic began, and less was known about COVID-19 transmission, the Orthodox group increased reliance on PPE and the use of bleach during the ritual, and included fewer participants during preparation of the deceased for burial.

Initially, the biggest questions were whether the virus could be contracted from the deceased, and whether the close gathering of attendants posed a risk, said Rabbi Elisar Admon, a member of Pittsburgh’s Orthodox chevra kadisha.

Consultation with Rabbi Elchonon Zohn from the National Association of Chevra Kadisha provided insight. Through digital meetings and conversations, members of the Pittsburgh group learned how Zohn and the Queens, New York-based organization worked with the New York City Office of the Chief Medical Examiner, infectious disease specialists and authorities in Jewish law to determine best practices.

The outcome for the chevra kadisha, which has performed fewer than 100 in-person ritual purifications since the start of the pandemic, said Admon, is that proper utilization of PPE is strictly enforced, adequate distance is maintained during the ritual and participants now travel in separate cars — but as more is learned about the virus, the group is slowly returning to its former practices. 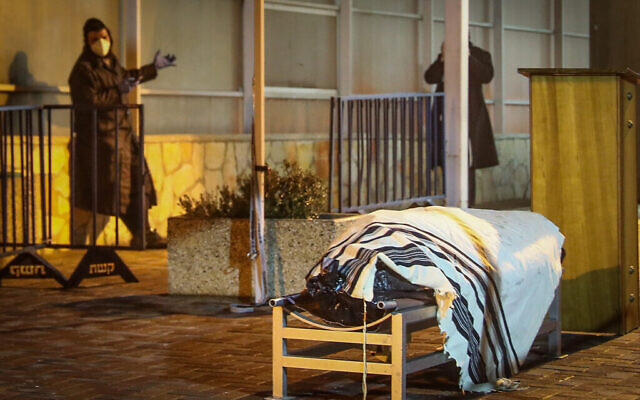 A man stands near the body of Holocaust survivor Aryeh Even, 88, and the first man to die in Israel from the Coronavirus epidemic, at the Har HaMenuchot Cemetery in Jerusalem, early on March 22, 2020. Photo by Yonatan Sindel/Flash90

Malke Frank, a longtime member of Pittsburgh’s New Community Chevra Kadisha, stressed the importance of upholding Jewish tradition, but said that she and members of the organization are still deciding on an appropriate time to resume in-person ritual.

As members of the group — many of whom possess medical backgrounds — determine procedures for recommencing in-person practices, the New Community Chevra Kadisha is conducting “spiritual taharot,” a ritual that enables the chevra kadisha to honor the deceased and “midwife its soul” with digital aids.

Given the inability of members to physically accompany the deceased on this final stage of the Jewish journey, spiritual taharot have taken on increased meaning, said Patricia Cluss, a founding member of the New Community Chevra Kadisha.

For families who’ve suffered losses during this period, there’s been an inability to access regular comforts, including joining loved ones during the dying process or gathering with family or friends for burial or shiva.

“It just makes the death of a loved one so much more awful for people,” said Cluss.

Spiritual taharot — which often include four people joining a Zoom meeting and recalling the deceased’s life as well as reciting the person’s name both in English and Hebrew, or Yiddish; lighting a candle on behalf of the deceased’s soul; reciting traditional liturgy; performing ritual hand washing; visualizing the purification process; and observing the placement of shrouds above the deceased — are not a meaningless substitute for in-person practices, said Frank.

“This is not a normal time, and we can’t do things as we normally do, and that doesn’t diminish our compassion, intention or sincerity in what we’re doing,” she said. “We’re still doing this mitzvah that we believe is so relevant, meaningful and important.”

Since the pandemic began, the New Community Chevra Kadisha has performed 79 spiritual taharot. Allen Baum, a 15-year member of the group, estimates that he’s participated in four or five since March 2020.

When notice arrives that a tahara is to be performed, Baum, who maintains regular communication with area funeral homes and members of the New Community Chevra Kadisha, works to ensure that the practice is observed in a timely fashion. And, like members of both Pittsburgh Jewish burial societies, Baum isn’t keen on accepting praise.

“I do it because it’s supporting the community, it’s maintaining the tradition, it’s providing continuity and it’s a mitzvah,” he said.

“Being Jewish, there’s a sense of obligation to help out and perform specific deeds that assist others, and I think that this is just one more aspect of that,” said David Zimmer, an eight-year member of the New Community Chevra Kadisha. 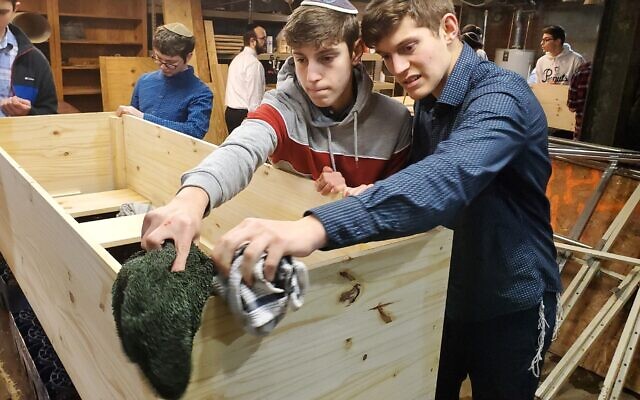 Prior to the pandemice, brothers Natan Marcus, left, and Benji Marcus wipe glue from a freshly made casket for later use by the Chevra Kadisha. Photo by Adam Reinherz

Years ago, Zimmer was introduced to the concept and practices of the chevra kadisha during a trip to Israel with Temple David in Monroeville. After returning home, Zimmer joined the Jewish burial society. With a background in nursing, he easily connected with fellow members and medical practitioners Dan Leger, a nurse, and Dr. Jerry Rabinowitz. Both men were shot during the Pittsburgh synagogue massacre on Oct. 27, 2018. Leger survived his injuries, but Rabinowitz was killed.

“Jerry was very influential in how I approach it,” said Zimmer.

As much as the process of Jewish burial is about respecting the dead, there’s also a critical need to support the deceased’s family and friends. That responsibility remains ever present, especially during a pandemic, said Zimmer, who has seen that the New Community Chevra Kadisha’s activities during the past seven months have been valued. Zimmer is anxious to resume in-person practices but understands that the group will only proceed at an appropriate time.

Having been denied the ability to do in-person taharot, Zimmer said that his appreciation for the ritual and those who uphold its practice has only grown.

“There’s a tremendous communal effect: Friendships have been made from within this group that perhaps may not have occurred, people from different aspects of the religious community have gotten together,” said Zimmer.

Beyond that, “I don’t think there’s a way to be able to partake in this spiritually without coming out with a religious sense and feeling about it,” added Zimmer. “It just is there. It’s all present around you.” PJC