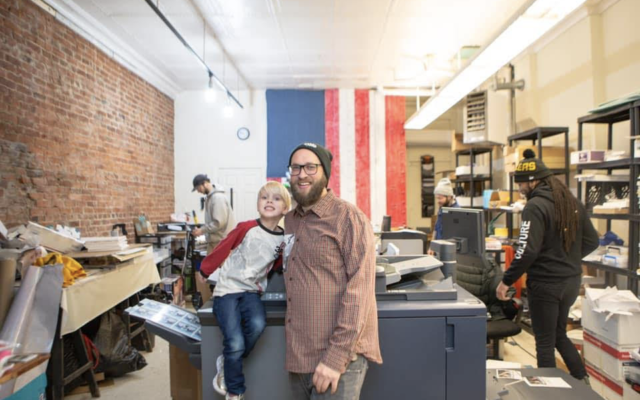 Josh Snider and his son Shark. Snider's printing business was helped with a loan from HFLA. (Photo provided by Josh Snider)

In March, when COVID-19 started to roll into Greater Pittsburgh, Josh Snider’s printing business didn’t hit bottom – but it got a little closer than he would have liked.

“I was expecting business to be down 50% because we do a lot of printing for venues and bands,” said Snider, who owns Flower City Printmakers in Bloomfield. “We’ve always done a lot of events-based printing.”

Snider responded by using fewer part-timers in the print shop. And he started delivering food via Uber Eats three or four days a week to make ends meet.

Then, he found the Hebrew Free Loan Association and, after stating his case, received a $5,000 business loan from the group in late April.

“Hebrew Free Loan’s help definitely helped keep us from getting behind,” Snider said.

The organization now is looking to broaden its mission, launching crowdfunding to back its new 412 Business Benefit Notes program and an initiative to support families that send their children to Jewish day schools.

The business initiative provides one- to three-year loans to business owners who make up the business districts Allegheny County residents know and love – and it’s all supported through donations from area residents looking to give back in the time of COVID-19.

To date, about $95,000 of the $100,000 minimum to get the program up and running has been raised, according to Aviva Lubowsky, a spokesperson for HFLA.

“You’re hearing correctly: persons will lend to Hebrew Free Loan for HFL to lend to small businesses,” said Richard Feder, immediate past president of the Squirrel Hill Urban Coalition. “After the small business loans are paid back, those persons will be repaid their contribution to the program, minus a small amount to cover loan losses which have historically been low at 1%, but will likely be higher due to the COVID economy.”

Cherie Maharam and her husband Stanley donated $1,000 to the cause.

“I see the restaurants that were closed – when they’re open, they’re only allowed to be partially opened,” said Maharam, a bookkeeper for a small engineering firm, who lives in Squirrel Hill. “There are all these little stores in this neighborhood and they were closed for a long time. That’s hard, to keep a business going.”

“I think it’s great to have an opportunity [to give], rather than just sitting there and saying, ‘That’s too bad,’” she added.

Funding for the initiative to back day school families who traditionally have not needed loans or assistance is soon to get underway. HFLA hopes to raise $100,000 for that initiative, as well, officials said.

Judi Kanal has six children who graduated for Hillel Academy of Pittsburgh– and five grandchildren now attending the Squirrel Hill-based day school. She’s concerned, yes, for those who traditionally need help but also for those who might never think to ask for it.

“What about the people who make a fine living normally?” Kanal asked. “Suddenly, COVID-19 hits and they’re off work for three, four months. When everything starts reopening, how do they make up for lost income?”

Kanal also is concerned, by extension, about the long-term financial stability of places like Hillel Academy, Yeshiva Schools of Pittsburgh and Community Day School, she said.

“We don’t want the day schools to find themselves in financial peril because people can’t pay their tuitions,” she said. “Hopefully, we’re successful and we can help people.” PJC