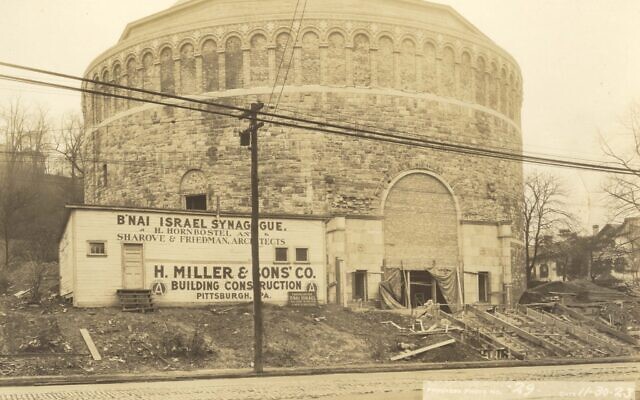 Barry Werber grew up on Hays Street near the border between Garfield, East Liberty and Highland Park, and just a stone’s throw from Congregation B’nai Israel — where he went to Hebrew school.

And sang in the children’s choir.

And, later, the adult choir.

And where his brother was married.

And where his son, now 53, became a bar mitzvah.

“The East End was my home,” said Werber, who now lives in Stanton Heights. “And B’nai Israel was my home away from home.”

About six years ago, Werber took an “old Jewish Pittsburgh” tour and got to go inside the now-vacant B’nai Israel, which, after closing in 1995, was briefly revitalized as a school.

“We literally cried on each other’s shoulders — it was such a mess,” Werber recalled. “Nobody had bothered to take care of it. The beautiful ceiling they had, parts of it were decaying. The benches where we sat were dirty. The walls were peeling. We cried quite a bit. To watch and see how it deteriorated was a very sad time for us.”

Beacon Communities hopes happier times are ahead for B’nai Israel.

The Boston-based developer has announced it is spearheading an $18.5 million “adaptive-reuse project” that will transform the site into a 45-unit, mixed-income housing community. Honored by the Pennsylvania Housing Finance Agency’s “Innovation in Design” award in 2019, the all-electric building will be designed to use minimal energy, with rooftop solar panels to offset energy consumption, the developer said.

Beacon Communities plans to begin construction at the site “immediately,” the firm said, with a grand opening planned for fall 2022. Applications for housing will be available in summer 2022.

Those involved with the project also hope to repurpose the former sanctuary through fundraising efforts into a multi-use space focusing on performing and visual arts. The historical elements of the structure will be restored and preserved, while natural construction techniques will be used to create an environmentally sound space, the developer said.

Sara Stock Mayo and Alyson Bonavoglia, along with the Bloomfield-Garfield Corp., are the community activists working to develop what they’re calling the “Rotunda Collaborative.”

“We’re thinking about, ‘What do we want this neighborhood to be? What ways can we come together, through the arts?’” said Mayo, who has described the rotunda as “awe-inspiring.”

“We want to keep the space as intact as possible,” she said. “We’re planning to keep the bima, the ramping along the side, and the stained glass.”

In the meantime, the consultants are commissioning eight artists to develop original works that can be displayed along temporary fencing at the site, Mayo said. This would be similar to the fencing and artwork currently installed outside the Tree of Life building.

Beacon Communities leadership is beaming about the project.

“We’re excited and proud to redevelop this historic Pittsburgh landmark into high-quality homes and community gathering space for the neighborhood,” said Michael Polite, the developer’s executive vice president. “This project exemplifies our mission to make a difference in our residents’ lives and build vibrant communities.”

Beacon secured funding for the B’nai Israel project through a mix of state, local and private funding sources. The Pennsylvania Housing Finance Agency (PHFA) provided financing through a Low-Income Housing Tax Credit allocation, first mortgage loan and other funds. Local construction and permanent gap financing were provided through the Urban Redevelopment Authority of Pittsburgh ($1.2 million) and the Housing Authority of the City of Pittsburgh ($1 million). Private equity topping $12.35 million was raised by RBC Community Investments, LLC, through the syndication of the tax credits, which were purchased by BNY Mellon. BNY Mellon also provided construction-period financing of $8.7 million.

“We’re pleased to see this important Pittsburgh building be preserved and transformed into affordable housing,” said PHFA Executive Director and CEO Robin Wiessmann. “Even better is the fact that the revitalized building will be super energy efficient, which benefits the residents and, of course, the whole planet. This development is an example of thoughtful redevelopment that provides a model for other affordable housing developers to emulate.”

Congregation B’nai Israel was founded in the early 1900s and opened its synagogue in 1923. Attendance there boomed as many Jews moved from the Hill District into parts of Pittsburgh then deemed “East End suburbs.” In the 1970s, the congregation’s membership began to decline as the Jewish population moved further into neighboring suburbs, and in 1995 B’nai Israel closed.

Malke Frank remembers B’nai Israel well. She was never a member of the congregation, though she attended services with family members who were, and she was married there on July 26, 1964. She also served as the principal of the congregation’s Hebrew school from 1986 to 1990.

Frank said the new construction “is great for the building to continue its legacy.”

Justin Vellucci is a freelance writing living in Pittsburgh.