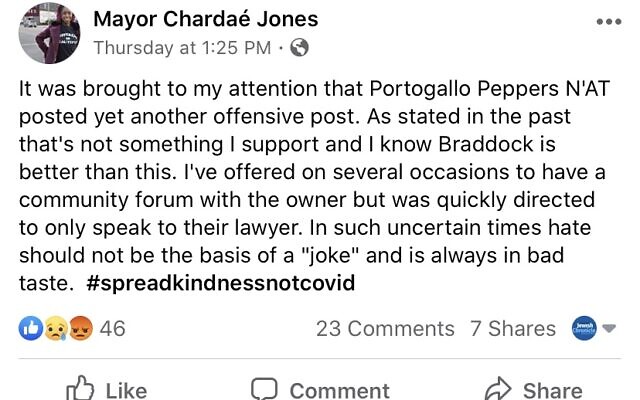 In the black-and-white image, Wolf’s and Levine’s heads are superimposed onto Nazis in uniform.

The post was captioned “Thursday’s lunch special is the Getapo Combo,” a misspelling of Gestapo, the official secret police of Nazi Germany.

It continued: “The Levinie Wienie and Wolfe Waffle Fries for $5.99. Political opinions are free!”

On Friday, the Community Relations Council of the Jewish Federation of Greater Pittsburgh shared a statement condemning the post.

“Hate is not a political opinion,” said Bob Silverman, chair of the CRC, in the statement. “This person clearly either does not understand or is unwilling to acknowledge the history of the Holocaust where 6 million Jews were murdered, as were a large number of LGBTQ+ people.

“He has every right to agree or disagree with the methods the Governor and the Secretary are undertaking in an effort to save lives during a pandemic, which includes additional regulations on restaurants. But the means by which he has expressed those opinions are entirely unacceptable.”

Braddock Mayor Chardaé Jones also condemned the post, writing last Friday on Facebook, “In such uncertain times hate should not be the basis of a ‘joke’ and is always in bad taste.”

It was brought to my attention that Portogallo Peppers N'AT posted yet another offensive post. As stated in the past…

Portogallo has apologized, telling City Paper that the post, intended to be comedic, was callous and that Portogallo Peppers N’AT did not move forward with the advertised “Getapo Combo” special.

Portogallo also said he did not realize Levine was Jewish. “I didn’t mean it in an anti-Semitic way,” Portogallo told City Paper. “Looking at it now, I can see how people took it that way.”

The post stemmed from frustration with restrictions on bars and restaurants in light of COVID-19, Portogallo told the Tribune-Review.

“It just feels like we’re being singled out, and a lot of people aren’t going to make it,” he said in the Tribune-Review. “We’re hanging on by a thread.”

Portogallo has previously posted content considered offensive, including an April post in which Portogallo mocked Levine, who is transgender, with a photo of himself donning a wig, glasses and pearls. It was condemned by members of Pittsburgh’s LGBTQ community. PJC