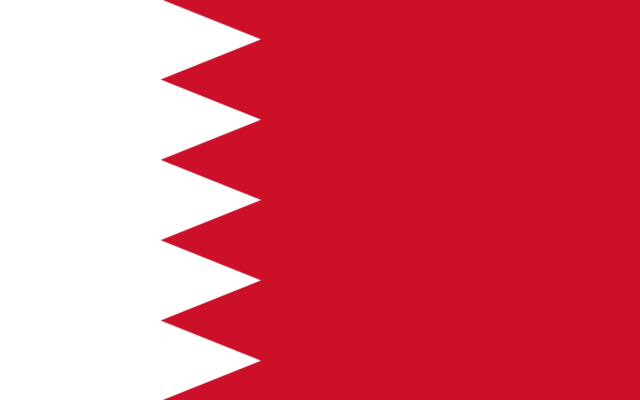 Flag of Bahrain. Photo from Wikimedia Commons, posted by FDRMRZUSA.

U.S. President Donald Trump announced Friday that Bahrain has agreed to establish full diplomatic relations with Israel, making it the second Gulf country to do so in less than a month.

Another HISTORIC breakthrough today! Our two GREAT friends Israel and the Kingdom of Bahrain agree to a Peace Deal – the second Arab country to make peace with Israel in 30 days!

A joint statement released by the White House said Bahrain’s King Hamad bin Salman al-Khalifa spoke earlier in the day with Prime Minister Benjamin Netanyahu “and agreed to the establishment of full diplomatic relations between Israel and the Kingdom of Bahrain.”

Israel and the UAE announced they were normalizing relations on Aug. 13, and a signing ceremony for their accord is being held at the White House on Sept. 15. Bahrain will now join that ceremony, with its foreign minister Abdullatif Al Zayani and Netanyahu signing “a historic Declaration of Peace,” the joint statement said.

The joint statement specified that the parties would continue their efforts to achieve a “just, comprehensive and enduring resolution to the Israeli-Palestinian conflict, to enable the Palestinian people to reach their full potential. Nonetheless, the accord constitutes another major blow to the Palestinian leader and Palestinian Authority President Mahmoud Abbas, who condemned the UAE-Israel deal as despicable and a betrayal, and sought in vain to have the Arab League condemn it earlier this week. 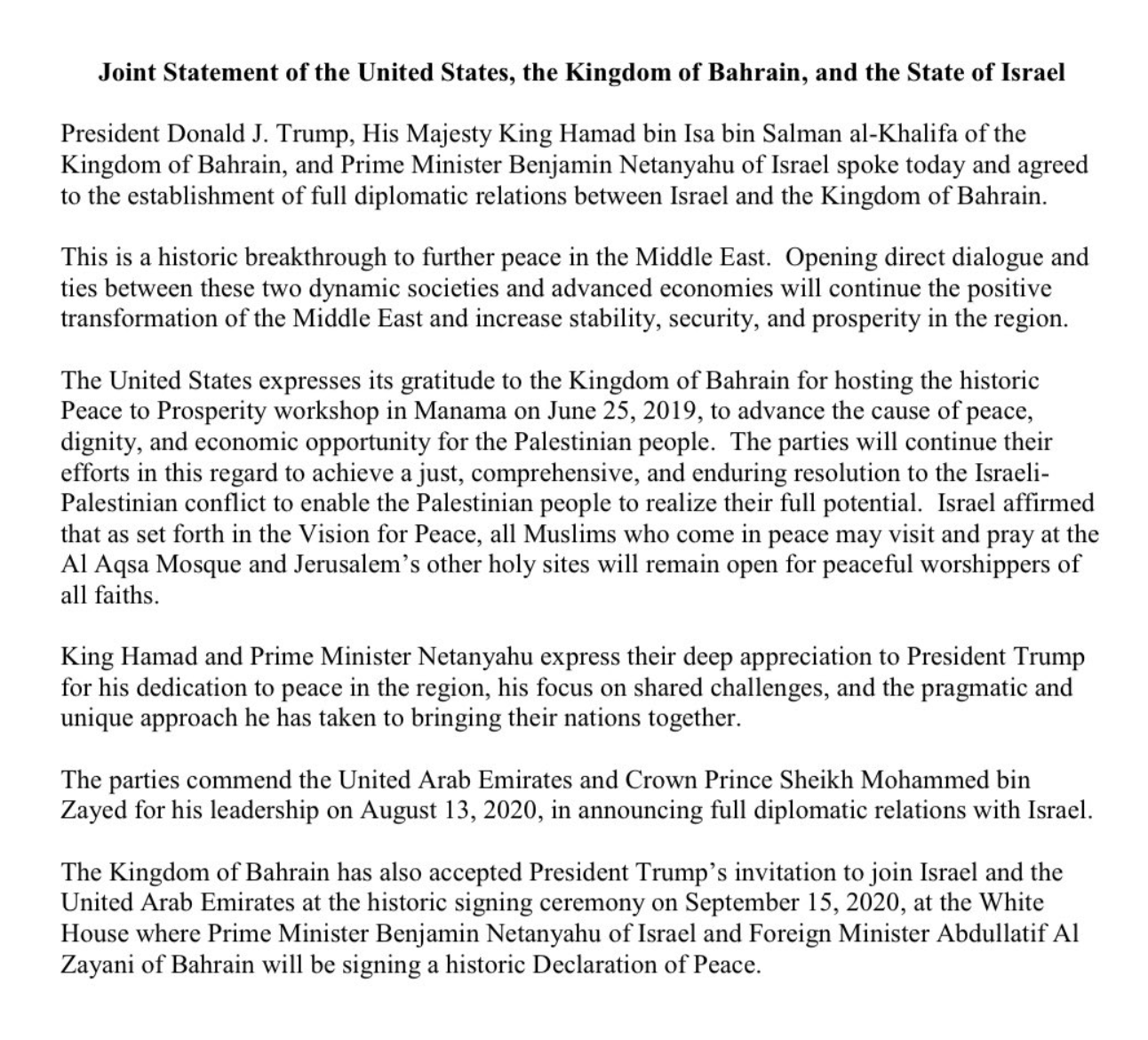 Screenshot of the Joint Statement of the United States, the Kingdom of Bahrain and the State of Israel posted to Trump’s Twitter account on Sept. 11.

He added: “This is a new era of peace. Peace in exchange for peace. Economy in exchange economy. We have invested in peace for many years and now peace will invest in us. It will lead to very large investments in the Israeli economy, which is very important.”

“All of these agreements are made through hard, behind the scenes work over years, but they have now been realized thanks to the important help of our friend US President President Trump, and I would like to thank him and his team for this important help. A new era – peace in exchange for peace.”

The Kingdom of Bahrain, a tiny island nation close to the UAE and Saudi Arabia, had been expected by many to be the next country to establish relations with Israel, as it has long made public overtures to the Jewish state.

This month, Bahrain announced that it was opening its airspace to Israeli flights. Nonetheless, when Trump’s senior adviser Jared Kushner traveled to Bahrain 10 days ago after heading a joint U.S.-Israeli delegation to the UAE, Bahrain’s king indicated that Manama would only ink a deal in concert with Saudi Arabia; and Riyadh’s crown prince told Kushner that an Israeli-Palestinian peace accord must precede any normalization agreement, in line with the 2002 Arab Peace Initiative.

Trump had hinted during a Thursday press conference that another country might join Israel and the UAE for their normalization signing ceremony.

“Next week at the White House we’ll be having a signing between the UAE and Israel, and we could have another country added into that. And I will tell you that countries are lining up that want to go into it,” Trump said during a White House press briefing.

“You’ll be hearing other countries coming in over a relatively short period of time. And you could have peace in the Middle East,” he said.

Regarding other possible accords, Trump said that a number of “big ones” are going to “come in,” and mentioned having spoken recently to Saudi Arabia’s King Salman. “I spoke to the king of Saudi Arabia, so we’re talking. We just started the dialogue,” Trump said.

In the weeks since the normalization deal was announced on Aug. 13, U.S. and Israeli officials have said other Arab states will follow the UAE’s lead and normalize ties with Israel, with speculation also focusing on Oman.

“King Salman and the Crown Prince, Mohammed bin Salman, they feel very strongly about the Palestinian cause. They would like to see the Palestinians work a fair deal and improve the lives of their people,” Kushner told reporters during a briefing on Wednesday.

“But again, they’re going to do what’s in the best interests of Saudi Arabia and the Saudi people and Muslim people from throughout the world as they take that responsibility very seriously,” Kushner said. “We’ll see what happens and for how long, you know, they want to do it. But I will say that a lot of people are losing patience with the Palestinian leadership.”

For his part, Trump on Thursday made a point of lauding UAE Crown Prince Mohammed bin Zayed Al Nahyan for his willingness to formalize relations with Israel. Trump called the UAE’s de facto leader a “warrior” and said “Mohammed’s very excited about this.”

Trump went on to claim that if he wins another presidential term in November, both Iran and the Palestinians will return to the negotiation table.

“If we win the election, Iran will come and sign a deal with us very rapidly. Within the first, I would say week, but let’s give ourselves a month because their GDP went down [by] 25% [as a result of U.S.-led sanctions], which is like an unheard of number and they’d like to get back to having a successful country again,” Trump said.

“And I think… the Palestinians will get back into the fold,” the president continued, admitting that he was “frankly surprised” that Ramallah has continued to boycott his administration since Washington recognized Jerusalem as Israel’s capital in 2017.

However, he said his administration’s decision to withhold $750 million dollars in annual aid to the Palestinian Authority “is the best way… to bring [the sides] together.” PJC