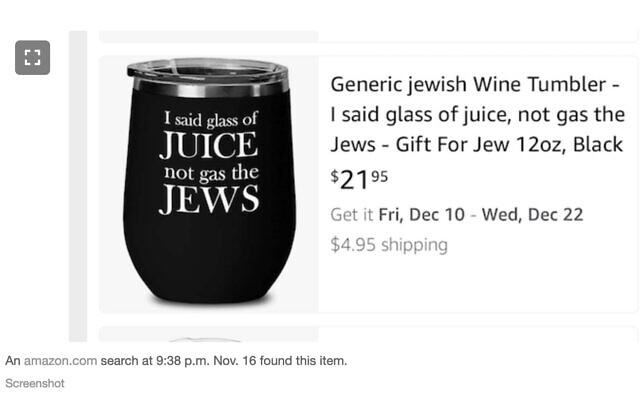 As late as 9:38 p.m. Nov. 16, customers of Amazon could buy a “generic Jewish wine tumbler” bearing the inscription, “I said glass of JUICE, not gas the JEWS.”

In a Nov. 17 emailed statement to the Cleveland Jewish News, an Amazon spokesperson confirmed the items were no longer being sold at Amazon.

“All sellers must follow our selling guidelines and those who do not will be subject to action including potential removal of their account,” the statement read. “These products have been removed.”

James Pasch, regional director of the Anti-Defamation League in Cleveland, said the ADL reached out both to amazon.com and to the third-party vendor that sells that particular tumbler.

“We’re glad that Amazon removed the product quickly,” he said. “Holocaust jokes are never OK and it normalizes something that should never ever be normalized.”

Holocaust jokes are offensive, he said.

“One of the reasons why we reached out to the third-party vendor is that … this product shouldn’t be sold anywhere. … Companies should not be profiting from Holocaust jokes and they should not be normalizing (them). And I hope that anyone that’s selling the product removes it immediately from their product line.”

Buynicer.top, an online store, is offering the same item at a cost of $10.98 plus shipping.

In 2018, multiple customers of Amazon complained about a coffee mug with the same saying on it.

A reviewer, identified as s.i.r., gave the coffee mug one out of five stars.

“Unbelievable,” wrote reviewer Liveforjehovah on Nov. 26, 2018. “I can’t believe this is allowed on Amazon. Very offensive and antisemitic.”

It was listed as a “unique gift for Jewish” on the Canadian platform.

A similar phrase, “Damnit! I said glass of juice not gas the Jews!” is featured on a coffee mug, a poster, a canvas bag, a men’s T-shirt, a hooded sweatshirt, a women’s T-shirt and scoop neck T-shirt at Zurich-based boldomatic.com, which describes itself as a content creation platform “determined to conquer the world of words in social media.” The image dates from Jan. 8, 2013.

Representatives at buynicer.top could not be reached for comment prior to deadline.

Multiple attempts to reach Steffen Scheitinger, a founder of Boldomatic, were unsuccessful.

Posters showing Hitler and the phrase “I said glass of juice not gas the Jews” also appear on multiple websites in a Google image search, some dating back to at least 2011. PJC

Jane Kaufman writes for the Cleveland Jewish News, where this first appeared.