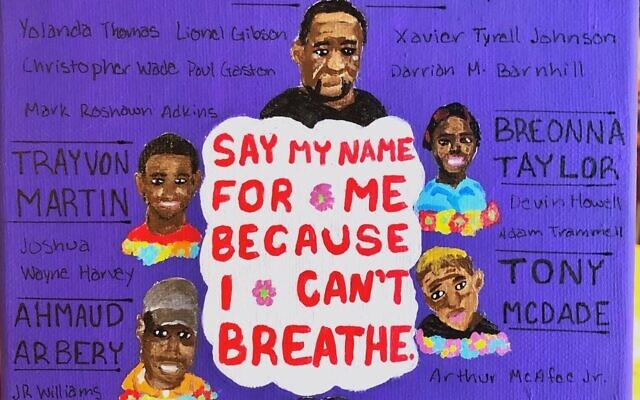 Eli Sigman, 21, remembers that after the shooting at the Tree of Life building in October 2018, there was an outpouring of support, including the Islamic Center of Pittsburgh raising money for those directly affected by the attack, and Christian ministries providing a stream of doughnuts and bagels for students at the Hillel Jewish University Center of Pittsburgh.

Now, in this moment, the Pitt junior finds it imperative that Jews stand with the black community.

“So many other communities came and supported the Jewish community in Pittsburgh,” he said. “They did such a good job of being there for us and being our allies that we want to show that we are also amazing allies, and we want to be there for other communities not only in their time of need but at all times.”

Sigman is one of many Pittsburgh students who consider supporting the black community in the aftermath of George Floyd’s death to be a Jewish responsibility.

“When I first learned about tikkun olam, it was very environmental-based,” said Dionna Dash, a rising junior at Pitt. “It was ‘repair the world’ very literally: take care of the environment, take care of the planet. Now reflecting back on that, it’s not just about that. It’s about the people in the world and how we have to make sure that we are preserving the lives of everyone.”

As executive board members for the Pitt Hillel Jewish Student Union, Sigman and Dash have helped create social media posts for Hillel JUC in the spirit of tikkun olam and tzedek, tzedek tirdof (justice, justice you shall pursue). The posts include resources for education and activism, and offer support for fellow student groups like Pitt’s Black Action Society. 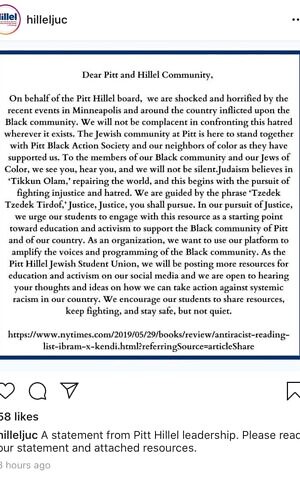 “We’re here to stand with the other organizations at Pitt and in Pittsburgh and in our country,” said Sigman. “It’s so important that we are with them and we try to use our resources and our privilege to amplify their voices.”

Jessica Daninhirsch, 16, hopes to amplify black voices using art. On a spare canvas she found in her house, Daninhirsch wrote the names of black people who died at the hands of police. Six faces in the center — one belonging to George Floyd — line a white bubble that reads in all caps: “Say my name for me because I can’t breathe.”

The North Allegheny Intermediate High School student says her view of racism, shaped by her experiences in Pittsburgh, was shaken by George Floyd’s death. “I wasn’t really aware of the level of [racism] in other places in the country,” she said. “I was in a bubble at first, and this burst the bubble.”

Floyd’s death also has prompted Daniel Hochman, a rising sophomore at Pitt and interorganizational liaison for Pitt Hillel JSU, to reflect more deeply on racism and justice. “George Floyd’s death was recorded, but [I’m] just thinking about how many deaths are not recorded,” he said. “There’s never justice for them.”

While these students support the black lives matter cause, some struggle with the Black Lives Matter network, which considers Israel an “apartheid state” in the invest/divest “Cut Military Expenditures Brief” on the website of Movement for Black Lives, which includes Black Lives Matter.

Still, these students back the cause of racial justice. “It’s one thing not to support a movement or an organization because they don’t support Israel,” said Sigman. “What’s really important is supporting the ideals that we can all agree on.”

To do so, he reads and shares news sources, signs petitions and donates. “As a white male American, it is so important now more than ever for me to use my voice and use my privilege to amplify the voices of those who don’t have the same privilege and the same resources as I do,” he said.

Dash suggests voting in smaller elections for local government officials and reading — she keeps her own book list.

“I want to know more about the African American perspective of what it’s like to be black in America and what it’s like to face violence like this,” she said. “I think reading more will just show me what privilege I have that I don’t even realize.”

Hochman, too, has been reading books by black authors, and he shares posts to his Instagram stories including quotes and videos from black people and lists of black-owned businesses.

He considers all of us responsible for becoming better, actively anti-racist allies. “Make it a part of your everyday life to fight against racism,” he said.
“There’s just so, so much that needs to be done.” PJC