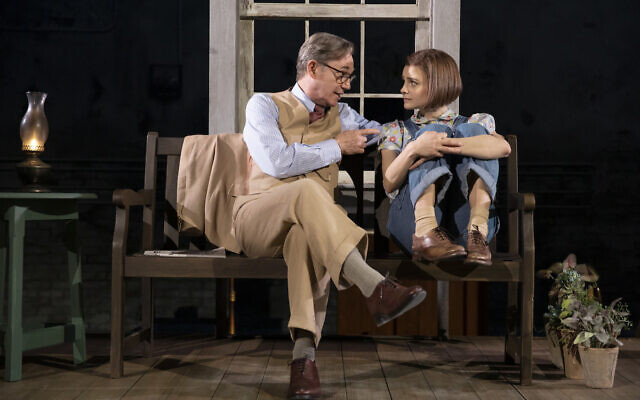 Watching a production of Jewish writer Aaron Sorkin’s stage adaption of Harper Lee’s novel “To Kill a Mockingbird” is like revisiting a hometown you left decades ago and that you returned to for a family function.The streetlights are the same and you can recall some of the businesses, but the images now appear slightly off-kilter with new buildings and the loss of landmarks you’re sure existed in your youth.

The touring production of “Mockingbird” ran at Pittsburgh’s Benedum Center from April 19-24. It will be in Cleveland at the Playhouse Square/Connor Palace Theatre from April 26 through May 15, and it’s worth the trip.

The plot of the play is essentially unchanged from the classic novel: Atticus Finch is called on to defend Tom Robinson (played by Yaegel T. Welch), a Black man accused of raping a white woman in the town. The trial and subsequent events are told through the eyes of Atticus’ daughter Scout, her brother Jem and their friend Dill — but the tone is updated to, perhaps, make a few pointed comments about modern America.

Superbly acted by Richard Thomas, Atticus is less concerned with the racial injustices faced by a Black man accused of a crime he didn’t commit than he is with validating his belief in the sensibilities and goodness of his neighbors. He’s convinced that when the jury deliberates on the case, Robinson will be acquitted because he simply couldn’t have committed the crime.

Atticus’ faith in his community is shattered when his neighbors convict Tom, who is eventually murdered by prison guards saying he attempted to flee. Sorkin is more willing to imply the murder was motivated by racism — instead of duty — than was Lee in her novel.

Sorkin also writes poignantly about a certain type of Southerner who wears the loss of the Civil War, unable to shake the shame of the defeat. The dialogue references 1930s Alabama, but its meaning stretches into 21st-century America.

Jacqueline Williams plays the perfect foil to Atticus as Finch housekeeper Calpurnia. She continually points out the naivety of Atticus while advocating for her own pride, and that of her community, with perfect comedic timing.

As good as Thomas, Williams and Welch are — and they are very good — the star of the play is Melanie Moore’s Scout. The actress draws comedy, outrage, drama, familial loyalty, love and skepticism from Sorkin’s words. One almost doesn’t notice that Scout, Jem and Dill are all played by adult actors. In fact, their age is forgotten next to 70-year-old Thomas, best known for portraying John-Boy on television’s “The Waltons” beginning in 1972.

Like Sorkin’s “The West Wing,” “Sports Night” and “A Few Good Men,” “To Kill a Mockingbird” has an uncredited costar — the dialogue. Sorkin is known to require the actors he works with to recite his lines unchanged. It appears as if that has held true for the traveling cast, which seems up to the task of digging deep into the dialogue to find both the rhythm and meaning of language written for Broadway with the creator watching from above.

At more than 2 hours and 30 minutes, “To Kill A Mockingbird” requires more concentration than the average theater attendee might normally commit. Those willing to accept the challenge will find a version of the work filled with emotion, that speaks to America’s modern sensibility and needs. Just don’t expect shades of Gregory Peck to remain when the final curtain falls. PJC