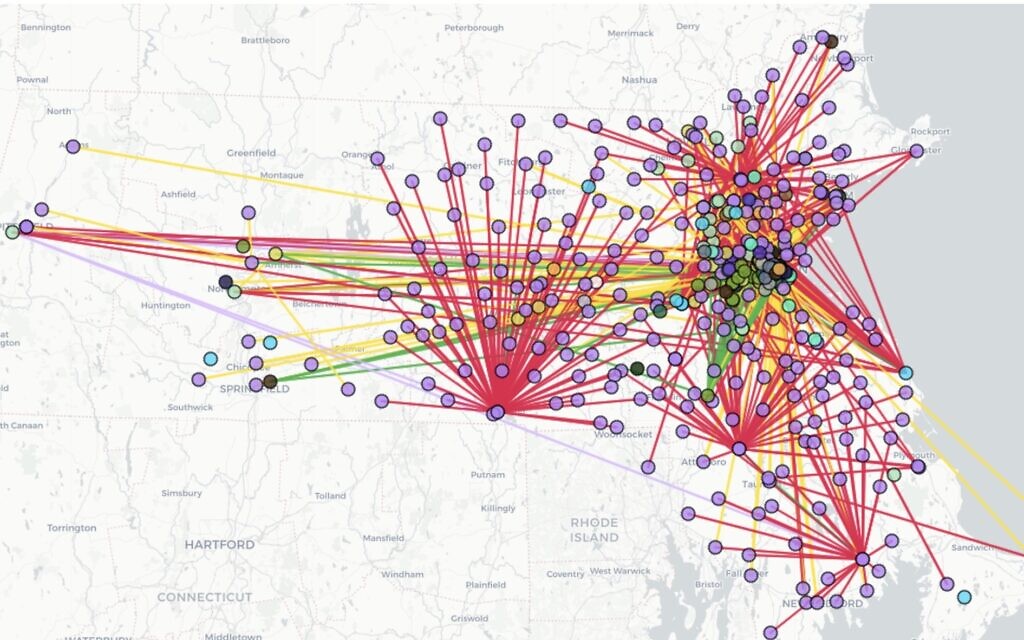 A map of purported connections between Jewish groups and other organizations in Massachusetts created by progressive activist group The Mapping Project, which says its goal is to map 'institutional support for the colonization of Palestine." (Screenshot)

Last week, an anti-Zionist group called BDS Boston promoted an initiative from an anonymous organization called “The Mapping Project” that recently released a graphic that depicted what it claimed are the interconnected nodes of “Zionism, Policing and Empire” around the state of Massachusetts. Among their targets: a Jewish high school, an arts collaborative, a coordinating body of synagogues, Harvard Medical School, and the Combined Jewish Philanthropies.

The organizers explained that: “We have shown physical addresses, named officers and leaders, and mapped connections. These entities exist in the physical world and can be disrupted in the physical world. We hope people will use our map to help figure out how to push back effectively…. we support non-cooperation, community self-defense, and resistance in all its forms.”

Invoking the specter of a sinister Jewish conspiracy is an age-old antisemitic trope and the accompanying call to action is one that has rallied people to vandalism, pogroms, and worse against the Jewish people across the centuries, including to the present day. By doxing and demonizing the Boston Jewish community while simultaneously calling for “self-defense” and “resistance,” it is not hard to imagine what this deranged propaganda could incite.

Sadly, the “Mapping Project” is not a one-off from a fringe group. Rather, it exemplifies how the increasingly aggressive purveyors of anti-Zionism are spewing raw antisemitism into the mainstream. The movement barely attempts to use the fig leaf of opposition to Israeli policies to cover a venomous hostility to the Jewish people.

Zionism is a belief that the Jewish people have the right to self-determination and statehood in their ancestral homeland. The yearning to return to Zion (the biblical term for the land of Israel) has been central to Judaism and Jewish identity for thousands of years.

Anti-Zionism, in its current form, is not just the intellectual opposition to this idea. It is a belief system predicated on the negation of Jewish nationhood and the Jewish right to self-determination. These anti-Zionist groups deny the historic and spiritual connection that Jews have to the land of Israel and seek to de-legitimize and extinguish the existence of the world’s only Jewish state.

And as seen in the aforementioned mapping project, modern-day anti-Zionist groups regularly employ antisemitic tropes and imagery — as well as incendiary rhetoric — to vilify all individuals and groups associated with Zionism and Israel, i.e., Jews.

Listen to how Zahra Billoo — a prominent Muslim-American activist and longtime leader of the San Francisco chapter of Council of American-Islamic Relations (CAIR) — spoke about Palestinian solidarity. In a public speech last year, she said the enemy is not just right-wing extremists, but “polite Zionists,” including mainstream American Jewish organizations like the Jewish federations, Hillel, and “Zionist synagogues.” She weaved a conspiracy of nefarious Jewish organizations that supposedly are working together to harm Muslims. And the response of CAIR? The organization stood by her despite this naked bigotry.

At Brooklyn College, Students for Justice in Palestine (SJP) posted on Instagram: “Zionism is not welcome on campus” and “#ZionismoutofCUNY,” effectively calling for the exclusion of Jews (students, staff, faculty) from all CUNY campuses.

And last week, the “anti-Zionist” organization Jewish Voice for Peace (JVP), which, despite its name, neither represents the Jewish community nor anyone truly interested in peace, shared a cartoon on its Instagram feed depicting Israeli soldiers drinking Palestinian blood, a classic antisemitic trope.

In these cases and scores more, activists may be calling out “Zionists,” but this is just how they whitewash their attacks on Jews. The problem with this rhetorical sleight-of-hand is that they are not fooling anybody.

ADL has tracked this usage of “Zionist” as an epithet for decades, starting with the Soviet Union where this disinformation tactic originally was designed. In fact, in 1967, none other than Martin Luther King, Jr. admonished a young man for making a derogatory comment about Zionists by saying: “When people criticize Zionists, they mean Jews. You’re talking antisemitism.”

Neither I nor historians know what motivated Dr. King to say this, but perhaps from experience, he knew that when you demonize a people enough, it leads many to violent action.

Last year, for instance, during the conflict between Israel and the terrorist group, Hamas, ADL logged 387 incidents — including 15 brazen assaults — that month, an increase of almost 150% over the same period in 2020.

Since then, Jews have been assaulted for carrying an Israeli flag and wearing a Star of David. A synagogue in Florida was tagged with graffiti including “F— Israel,” and on the flipside, an Israeli restaurant was vandalized with a spray-painted “F— Jews.” The list goes on and on and on; the threat environment expands.

When I recently made these points in an address to ADL leadership, some observers took issue with my equating the threat of anti-Zionist organizations — such as SJP, JVP, and CAIR — to the threat posed by extremist organizations, such as the neo-Nazis who chanted “Jews will not replace us” in Charlottesville, the Proud Boys, and Oath Keepers.

To be fair, these are very different threats. As I said in the speech and as ADL has documented for decades, far-right extremism is a singularly lethal and dangerous threat to the Jewish community and to our country. For years, individuals have been driven by white supremacist conspiracy theories to murder Jews along with other minorities. From Pittsburgh to Poway to Buffalo, it is a violent danger that should not be underestimated.
At the same time, we also must recognize the growing threat posed by the organized anti-Zionist movement, which — despite its effort to wrap itself in the progressive cloak of solidarity with oppressed minorities — is no less conspiratorial and antisemitic. Left unchecked, the demonization, vilification, and conspiracy theories from anti-Zionists will lead to more — and even deadly — violence.

This is not a paranoid abstraction. Rather, it is what Jewish communities in Europe have experienced over the past several years, and it is what we see happen to other minority groups such as Asian-Americans in the U.S. in the wake of COVID, to name just one example.

Let’s be clear: this does not mean that Israel should be exempt from critique.

There are a host of Jewish groups in and out of Israel that criticize the actions of the Jewish state, such as, Ameinu, J Street, and T’ruah. Unlike the anti-Zionist groups who think pro-Palestinian solidarity compels an anti-Jewish racism, these groups believe that Zionism does not compel being anti-Palestinian. In fact, they — along with ADL — often condemn those politicians, groups, and commentators who incite violence against Israeli Arabs or Palestinians and advocate for a Palestinian state alongside the Jewish state of Israel.

Equally importantly, these critics inside and outside the Jewish community — many who are proud progressives — level their critiques without demonizing Jews, calling for violence against Jewish organizations, or calling for the eradication of the Jewish state.

These organizations know that words have consequences. Words lead to actions, so they choose them carefully. The leaders of SJP, JVP, and CAIR know this too. And so we have no choice but to take what they say seriously. And by judging those words, it is clear that these anti-Zionist groups represent a growing antisemitic threat in the United States, a threat that ADL will redouble its efforts to counter. PJC

Jonathan A. Greenblatt is CEO and National Director of the Anti-Defamation League. This piece first appeared on Times of Israel.