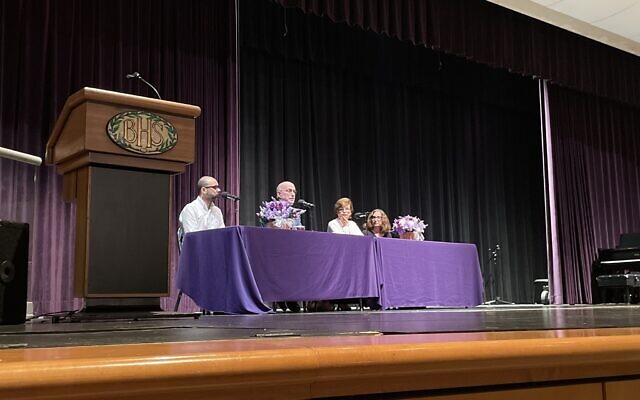 Eric Lidji, John Spurlock, Barbara Burstin and Lauren Bairnsfather recently spoke at a public screening of the new WQED documentary “The Letters: A Plea for Help.” Photo by Kim Rullo.

You can learn a lot from a letter.

Dottie Levitsky uncovered the good work done by her late aunt and uncle and Pittsburgh residents Avram Sanford and Hasele Deutsch Levy from a collection of letters she inherited after their death. She also learned a little about America.

“The government did everything possible to not let the people come, even though they knew they were going to be killed,” Levitsky said.

The people she referred to are the Jews, desperate to escape the rising tide of antisemitism and hate taking hold in pre-war Germany and its satellite countries. The government is the United States which, because of laws and quotas, like the Immigrant Act of 1924, would only accept so many refugees, no matter the dilemma they might face.

To find safe passage from Nazi-controlled Europe, refugees had to work with both the Nazi government and the government of the country where they wished to escape. To enter the United States, emigrees had to secure affidavits from American citizens who would vouch for the refugee, stating that they would be able to find work and, if not, that the signatory would provide financial backing.

Gertrude Deutsch Perles, an Austrian citizen living in Vienna with her husband, knew the terror that was about to visit her homeland and was frantic to find an avenue of escape.

She came across Hasele Deutsch Levy’s name in the magazine Woman’s Wear Daily; Deutsch Levy was a buyer for Kaufmann’s department store. Deutsch Perles saw the shared surname and thought it might motivate the American to provide a lifeline from the coming Holocaust.

Coinciding with the release of the new PBS documentary by Ken Burns, Lynn Novick and Sarah Botstein, “The U.S. and the Holocaust,” WQED has created the short documentary “The Letters: A Plea for Help.”

The film tells the story of discovering the letters after the death of Avram, an estate lawyer who died without a will; the search for Levy’s descendants; and the historical story of refugees like Deutsch Perles who, scared for their lives, sought a way to escape Nazi Germany.

Holocaust Center of Pittsburgh Director Lauren Bairnsfather, University of Pittsburgh and Carnegie Mellon professor and author Barbara Burstin and Director of the Rauh Jewish History Program and Archives at the Senator John Heinz History Center Eric Lidji are all featured in the documentary.

In fact, when WQED producer Iris Samson was searching for a subject for the documentary she turned to Lidji who suggested the letters, among a few other ideas centered on America and the Holocaust.

Lidji said the Levy collection is special because of the types of documents it contains.

“What makes it unique is that it has all the government documents but there’s also this set of correspondence going back and forth that both explains what the documents are and contextualizes it within a very human scenario,” he explained. “This exchange back and forth, you see what it takes to navigate that process. The boldness that you need. The faith you have to have in other people. The repeated requests for more information. You get a sense in real time of what it must have been like to be a part of that process.”

Burstin said the letters help us to understand what was at stake.

“There was correspondence in the 1930s. That’s what these letters are all about — pleas to help. The Jews began to realize that it was life or death,” she said. “The pleas get more desperate as the 1930s dragged on. Americans certainly got those letters; that’s a feature to this movie.”

By 1940 or 1941, the letters stopped, Burstin said, because the Jews had been sent to concentration camps or were murdered.

The process of gathering the needed documents could be frustrating, especially considering the slow pace of intercontinental communications at the time, Bairnsfather said. That’s a point illustrated in the documentary and by the letters between the Levys and Deutsch Perles.

“By the time the documents arrived,” she offered, “there might be new procedures and you’d have to start all over again. It was very difficult. People who were able to get out were either high profile like Einstein, Sigmund Freud or other internationally prominent people. You also had a much better chance if you started in 1934 than if you tried in 1938 or 1939.”

Deutsch Perles’ story ended on a happy note. She and her husband were able to immigrate to America, though not to Pittsburgh, through the assistance of another contact. In a final letter, she writes the Levy family, thanking them for their efforts and saying she would like to meet them one day. Unfortunately, the families never met.

Documentary producer Samson said when she was approached by a vice president at WQED to make a documentary she remembered a story she researched during her time working at a magazine published by B’Nai B’rith International.

“I found letters from all over Europe in the late ’30s to people in Washington, D.C., and other Americans. I found them very moving — the fact that we didn’t know the full scope of what was going to happen but these letters, you can read the desperation in their voices,” she said.

“The Letters: A Plea for Help” premiered on Sept. 9 and was screened on Sept. 12 at Baldwin High School. The public screening included a panel featuring Bairnsfather, Burns, Lidji and Seton Hill professor John Spurlock.

Samson said there are some takeaways from the documentary for America today.

“There’s a rise in antisemitism and racism and bigotry that we’re seeing in America that I don’t recall in my 63 years on earth. There are parallels to the sort of political climate that was happening in Germany and Austria at the time,” she said. “The more we speak up about these types of issues, racism, anti-immigrant mentality and antisemitism, the more people can’t ignore it.”

For Levitsky, the documentary and letters prove what she’s always known about her family.

“My grandfather used to have a business in Germany. The story goes that during the Holocaust he would smuggle people out. I don’t know if that’s true. I have no proof of that but this, I have proof. And they were very good people,” she said. PJC