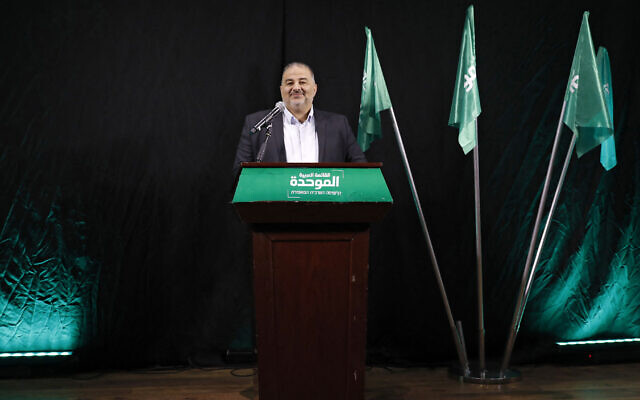 Mansour Abbas, head of Israel's conservative Islamic Raam party, speaks during a press conference in the northern city of Nazareth, on April 1, 2021. (Photo by AHMAD GHARABLI/AFP via Getty Images via JTA)

(JTA) — Following yet another Israeli election, voters are getting to know an unlikely kingmaker: Mansour Abbas, an Arab-Israeli lawmaker who might be the one to break Israel’s two-year political stalemate.

Abbas, head of the United Arab List political party, is not the kind of politician who usually wields power in the Jewish state. He’s an Islamist who has more in common ideologically with Egypt’s Muslim Brotherhood than with any of Israel’s establishment political parties. But through unorthodox electoral maneuvering, Abbas has set his small party up as the potential swing vote between longtime Prime Minister Benjamin Netanyahu and his broad array of sworn opponents.

Here’s a primer on Abbas and his potentially pivotal role in the wake of the latest election.

A dentist by training, Abbas, 46, got involved in political activism while studying at Hebrew University, where he chaired the Arab Students Committee. He later became a leader in the Islamic Movement in Israel, an offshoot of the Egyptian Muslim Brotherhood that seeks to draw Arab Israelis to Muslim observance and political activism, in part by providing social services like health clinics, schools, mosques and a sports league. The movement is split into rival Northern and Southern Branches. Abbas is a member of the Southern Branch.

The Northern Branch was outlawed by Israel in 2015 based on accusations of extensive financial and organizational ties to Hamas, the militant group governing the Gaza Strip. The group does not recognize Israel’s government and, in the past, organized protesters to harass Jewish visitors to Jerusalem’s Temple Mount, which is revered by Muslims as the Noble Sanctuary.

The Northern Branch’s leader, Raed Salah, has been repeatedly prosecuted by Israel for incitement to violence and related crimes. He once said, “The streets of Jerusalem will be purified by the blood of the innocents whose souls were taken by the Israeli occupation soldiers.”

In contrast, Abbas has disavowed violence, and his Southern Branch is relatively moderate. It has fielded a party in Israeli elections for the past 25 years, usually in partnership with another Arab-Israeli slate. Until this year, the party, called the United Arab List (or Raam, as it is referred to in Israel), ran as part of the Joint List, an umbrella Arab-Israeli party that’s currently the third-largest in parliament.

Why is he influencing the race to form a coalition?

Abbas accrued power this year by breaking from the Joint List and saying he would consider allying with any Israeli politician, left or right, Netanyahu or not, as long as they agreed to advance his communal interests. Arabs make up about a fifth of Israel’s population, but no Israeli Arab-led party has been part of a coalition in the country’s 73-year history.

Abbas’ party gained barely enough votes to enter Israel’s parliament, the Knesset, last week, winning four seats out of 120. But Israel’s political landscape is interminably split, and Netanyahu and his rivals are both looking for as many seats as possible to add to their potential coalitions. Both camps are courting Abbas as the leader who could deliver them a governing majority.

As of now the math is fluid. The pro- and anti-Netanyahu coalitions are both short of a 61-seat majority. Another party, the right-wing Yamina, is also positioning itself as a swing vote, meaning that both sides might need both swing parties to form a government. On Tuesday, Israeli President Reuven Rivlin tasked Netanyahu with the job of forming a coalition. If he fails, the opportunity falls to someone else.

So after decades in which Israeli Arabs have been excluded from Israel’s leadership, Abbas may be the one who shatters the taboo on forming a joint Jewish-Arab governing coalition.

Who will he support?

Arab-Israelis have long been associated with the country’s political left, but Abbas has remained coy about who he will support as the next prime minister.

In a speech Thursday broadcast on Israel’s major TV networks and delivered in Hebrew, he instead positioned himself above the fray, urging unity across Israel’s ethnic and religious divisions.

“I bring a prayer of hope, and of uncompromising determination for a shared life based on mutual respect and true equality,” he said, defining himself as a “man of the Islamic Movement, a proud Arab and Muslim and a citizen of the state of Israel.”

“Our common denominator is greater than what divides us,” he said.

The Joint List, which held 15 seats in the outgoing parliament, is firmly on Israel’s political left and is an outspoken critic of Netanyahu and his allies. In 2019 and 2020, when three earlier rounds of Israeli elections produced similar stalemates, Netanyahu’s opponents considered forming a coalition with the Joint List in order to oust the prime minister. But right-wing members of the anti-Netanyahu camp opposed partnering with Arab Israelis whose views on the Israeli-Palestinian conflict and other issues diverged from their own.

His party is not centrist when it comes to the conflict. According to the Israel Democracy Institute, the party calls for evacuating Israel’s West Bank settlements, establishing a Palestinian state with a capital in Jerusalem, and giving Palestinian refugees the right to return to Israel — positions that are anathema to Netanyahu and his right-wing allies.

But Abbas emphasized pragmatism in his campaign, saying he would work with anyone who committed to addressing bread-and-butter issues in Arab-Israeli society, like combating crime and providing economic development. “We need to attempt to bargain and negotiate in order to bring about achievements for our people,” he told the Jerusalem Post in November.

What could get in the way?

In the past, Netanyahu has made opposing Arab parties — and voters — a piece of his election campaigns. In 2015, he controversially posted a video warning that Arab-Israelis (who have the right to vote) were “heading to the polls in droves.”

But this year, Abbas’ offer may be tempting to Netanyahu, who is contending with a corruption trial and may seek whatever support he can get to pass a law giving him immunity from prosecution until he leaves office. But one of Netanyahu’s allies, the far-right Religious Zionism party, has ruled out working with Abbas in any capacity.

Netanyahu’s opponents likewise may not be able to find a way to include Abbas in a coalition. The anti-Netanyahu parties include some right-wing lawmakers who likewise have opposed partnering with Arab-Israeli parties.

Both sides need every vote they can get in parliament, and if neither side is able to form a coalition, Israel will head to a fifth round of elections, throwing Abbas’ future into the air. But should Abbas convince the prime minister or his opponents to work with him, he could decide the future of Israel — and break a major barrier for its largest minority. PJC