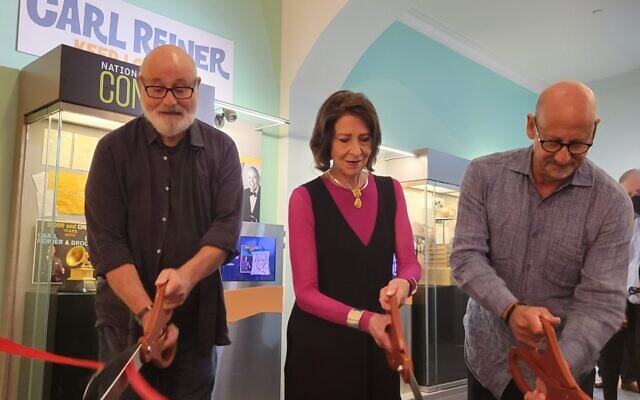 “Well, he was a big Jew,” Carl Reiner’s daughter, Annie Reiner, responded when asked about the impact Judaism had on her father’s writing.

“6-foot-1-and-a-half,” Rob Reiner, Annie’s brother, added to the delight of those in the room.

When the accompanying laughter subsided, Carl Reiner’s daughter said that her father’s comedy was culturally Jewish. Her older brother concurred.

“His upbringing and his Jewish background — it’s in everything,” the noted actor, director and producer said. “There’s a reason Jews are funny, because they experienced horror and terror, and if you can’t find a way to laugh, you cry.”

Carl Reiner, who died in 2020 at the age of 98, found more than one way to laugh through his years in stand-up comedy, television and film. Best known for his work on Sid Caesar’s “Your Show of Shows” and the groundbreaking “The Dick Van Dyke Show,” Reiner also directed popular films including “The Jerk,” “The Man with Two Brains” and “Oh, God.”

The Reiner siblings — Rob, Annie and their younger brother, Lucas — were in Jamestown, New York, on July 27 to cut the ribbon on the National Comedy Center’s newest multimedia exhibit, “Carl Reiner: Keep Laughing,” which honors their father. The Reiners also participated in a special event, “Carl Reiner at 100: Celebrating A Comedy Legacy,” at Chautauqua Institution. 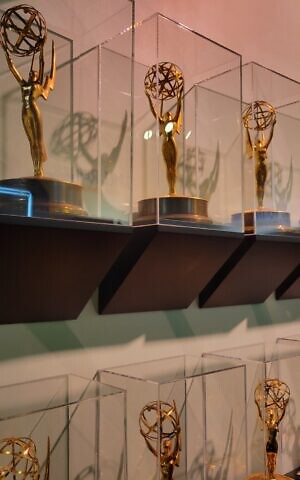 Carl Reiner’s Emmy Awards. Photos by David Rullo.
The family donated 75 boxes of Reiner’s writing and other material to the center, which is the home of The Carl Reiner Department of Archives and Preservation. The archive includes thousands of pages of creative papers and business correspondence; unpublished comedy material; photographs; film footage and audio recordings; industry awards including Reiner’s Emmy award and Mark Twain Prize; and a collection of early drafts and final scripts from throughout his career. It also includes the chairs in which he and lifelong friend Mel Brooks sat most evenings as they ate together and watched television.

National Comedy Center Executive Director Journey Gunderson said Reiner’s seven-decade career was remarkable not only for its longevity and consistency but also because his work inspired generations of artists and innovators working across a range of genres and media. 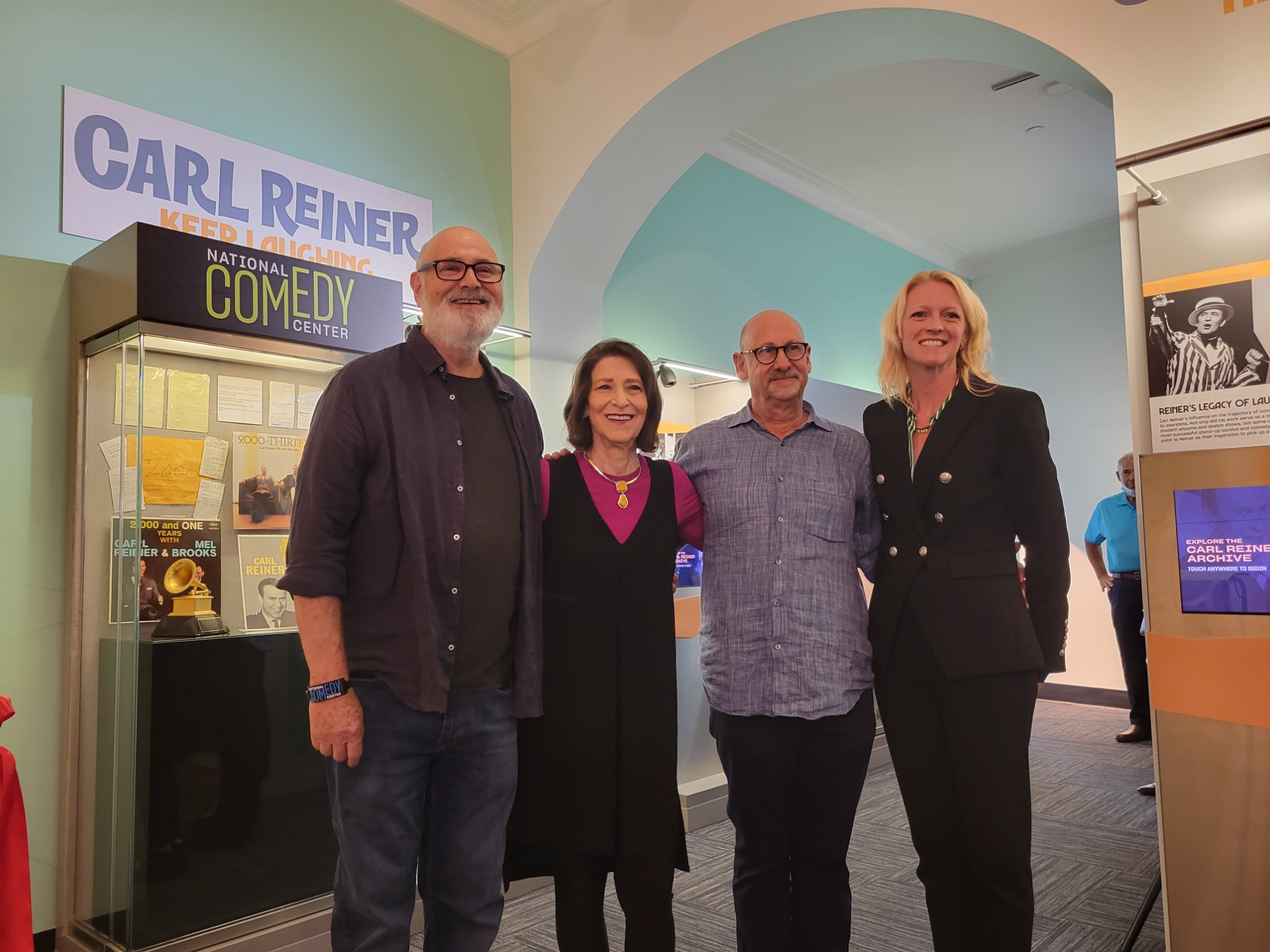 “The National Comedy Center is proud to have had him as a founding advisory board member, to have named the Carl Reiner Department of Archives and Preservation in his honor, and now to be the exhibition home to his incredible archive, all so that people can continue to learn from his genius for generations to come,” she said.

Before cutting the ribbon on the exhibit, youngest son Lucas called the center, which opened in 2018, a “mecca for comedians.”
“My father is very happy to be here,” he said. “I’m sure he’s in this room right now.”

Beginning a theme that was repeated throughout the day, Annie Reiner described her father as a “sweet” man.

“He was famous for decades, longer than most people,” she said, “and I think that’s because he had a very open heart. I think that touched people and drew them to him.”

“I never met anyone that had a bad word to say about him,” he said.

Rob Reiner recalled that his father was on television before the family owned a set. Once they bought one, Carl Reiner told his brood that he couldn’t communicate directly with them at the end of each episode of “Your Show of Shows,” but he would adjust his tie.

“And that meant I love you and go to bed,” Rob Reiner said.

The celebration of a universally beloved funny man was continued under a star-filled sky at the Chautauqua Institution’s amphitheater. 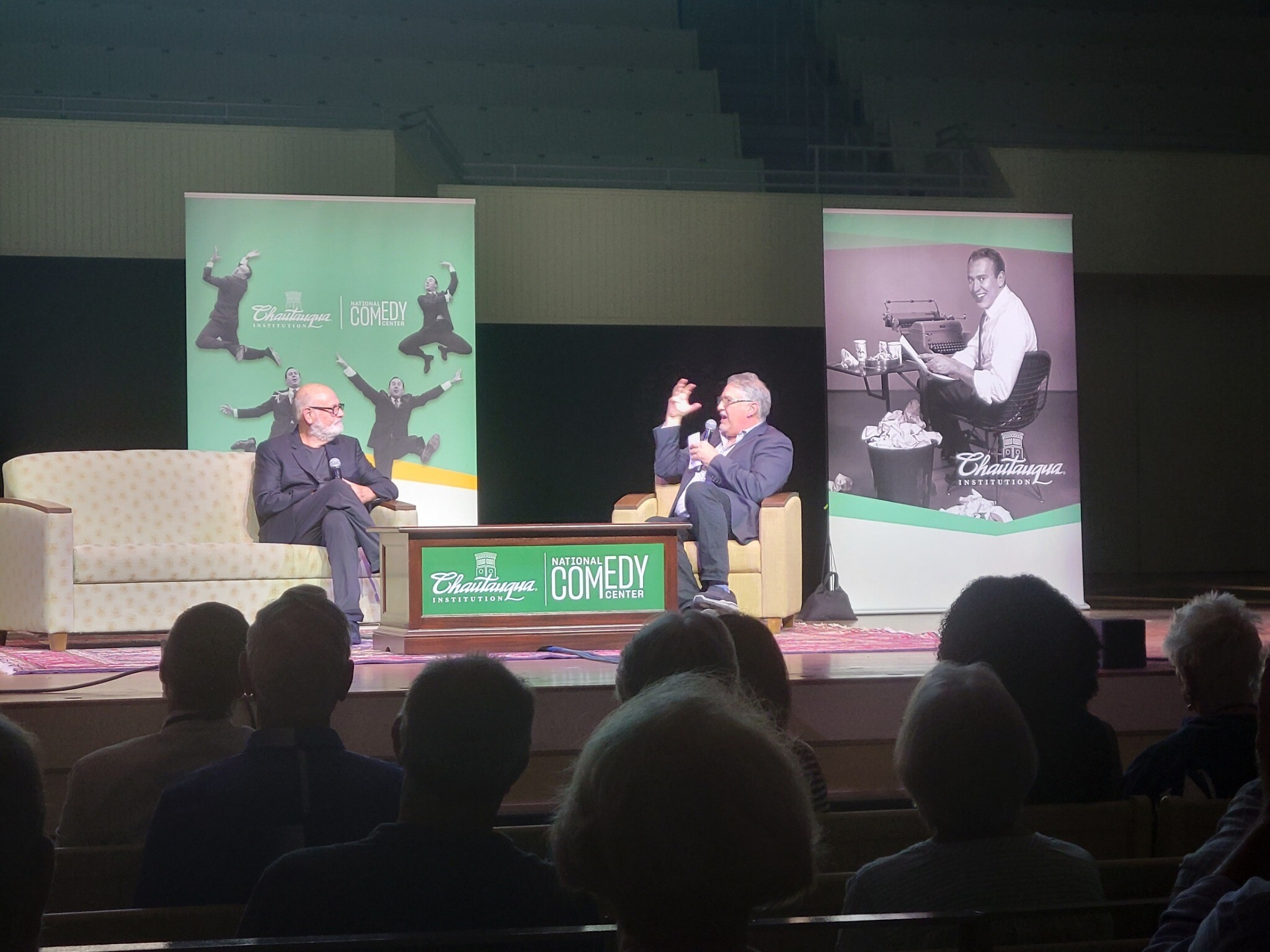 The event was filled with laughter but also poignant tributes from family and friends who spoke of the ways the comedy genius made a difference in their lives.

“He was a father figure, the sweetest, charming guy,” Martin said. “He definitely gave me an example of how to be a better man.”

Lucas Reiner, who is an artist, remembered advice his father gave him while attending art school.

“I made a short film that was about three minutes long, and the first 45 seconds of the film were just black leader tape. He said, ‘Don’t do that. Just, you know, don’t,’ Lucas Reiner recalled.

A special tribute was paid to Reiner’s wife, Estelle, who also occasionally appeared in films, including “When Harry Met Sally,” directed by Rob Reiner.

Hazell, who is doing work with the estate of Johnny Carson, had access to the talk show host’s film archive and brought a clip of Estelle Reiner singing on the late-night program.

Lucas Reiner said his father loved his wife’s singing and would carry her stool, microphone and amplifier to various gigs every few weeks.

“Carl Reiner: Keep Laughing” is now open at the National Comedy Center. The museum is less than a three-hour ride from Pittsburgh. The travel time might be daunting, but for comedy buffs, it’s worth the trip.

As Rob Reiner told Hazell, his father’s influence on comedy is a lasting one.

“When I was at the exhibit today, I was like, ‘Wow.’ You forget about the breadth of his work. I mean, he worked with Steve Martin and Mel Brooks and Dick Van Dyke. If you laughed at anything in the second half of the 20th century, it came from that writers’ room in Sid Caesar’s “Show of Shows”— my dad and Mel Brooks and Neil Simon and Woody Allen and Larry Gelbart and Joe Stein, everything you laughed at was them.” PJC