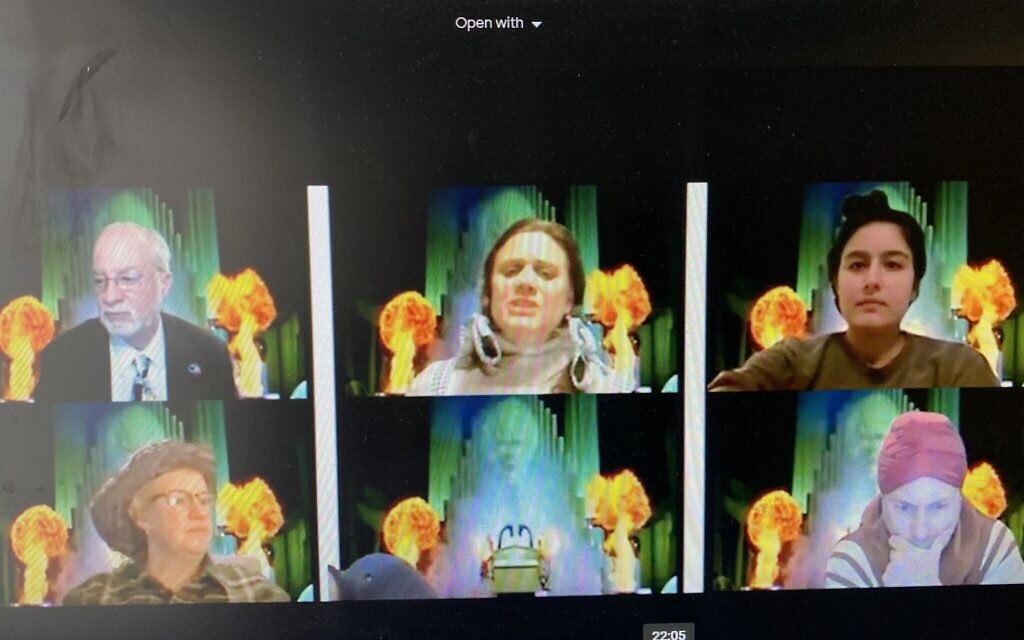 By mid-January, I’d already received a half dozen emails from my rabbi, Jeffrey Myers of Tree of Life Congregation in Pittsburgh. The latest is the strangest yet. “Molly,” it reads, “I’ve picked up your angel wings.”

I’d like to pretend that my exemplary moral character and dedication to good deeds has led to this unprecedented seraphic reward, but no. It is just that time of year.

You know — that post-Chanukah holiday lull. Tumbleweeds zooming through the main sanctuary. A few well-earned months of easy coasting before you discover an entire aisle of matzah boxes in the supermarket, heralding the imminent maelstrom of rigorous Passover prep.

As with many other less observant Jews, my synagogue attendance is, shall I say, most vigorous in early autumn. Beginning with Sukkot, other than the occasional simcha or Kabbalat Shabbat service, our family focus turns to rituals that can be enjoyed at home. When the last candle on the Chanukkiah gutters, that’s the signal for my habitual nosedive into a period of religious delinquency.

This year, the double whammy of winter hibernation and totally-over-the pandemic exhaustion has me feeling even more disassociated and disinclined.

But, it is also the time of year when my rabbi starts sending those emails, recruiting members for the annual Purim shpiel. For some reason, I can ignore a phone call from my mother, but not an email from my rabbi. I can predict the supplication about to arrive in my inbox, so I prepare my excuse. “I crashed cross-country skiing,” I can explain. (True.) “I have a swollen face that would crash Zoom, too.” (Probably true.)

My email pings again. The rabbi offers good wishes for my recovery and feels optimistic that in two weeks I’ll be fine enough to reconsider. (Actually, he sounds a lot like my mother.)

Ping! More important rabbinical information! In this year’s shpiel, Dorothy/Esther of Squirrel Hill has been pulled into her computer and must face a variety of apps and challenges to find her way home. Good news! I am not to be the Wicked Kvetch of the West. I am to be Glinda, Good Witch of the East, aka Auntie Virus.

I give up and order a rhinestone wand and a pink crown.

The shpiel is a Yiddish theatrical tradition dating back a thousand years. In the Middle Ages, it became custom for Ashkenazi Jews to perform a Purim shpiel, a comedic dramatization of the Megillah (Book of) Esther. The scroll, which is read aloud in its entirety on the holiday, is a historical recounting of the persecution of the fifth-century B.C. Persian Jews and how they avoided genocide with the help of their secretly Jewish queen. Part morality play, part medieval drinking game (sip when you hear the name of evil advisor Haman), the shpiel is a farcical/musical mashup that often takes aim at social and political issues. A “Saturday Night Live” precursor, if you will. Like Halloween, the festivities involve dressing up in costume and eating hamantaschen, a triangular, filled cookie styled in mockery of Haman’s comb-over — er, hat.

For 2021, Rabbi/Hazzan Jeffrey Myers, masterful writer/composer/director/producer/set designer/costumer/IT support/stage boss, has crafted a new original script (“The Wizard of Blogs”), a seven-week rehearsal schedule, and a cast of dubiously talented congregants, both volunteer and voluntuntold (no need to know who is whom). Not to mention a cache of costumes. My email pings yet again. I arrange a day to collect my glittery feathers from his front porch and sign off with a haloed emoji.

This year, Purim preparations have been unlike any before. With COVID’s safety protocols and social distancing restrictions in play, most synagogues remain physically closed. Seven local synagogues have coordinated their efforts to create an evening of virtual events. On Feb. 25, “The Only Zoom Purim Ever — We Hope” will include live entertainment, a full megillah reading, and the airing of the highly anticipated pre-taped shpiel.

I’ve personally gone through my own Zoom coaster, periodically embracing and rejecting the format. It’s both more difficult and easier to connect with the community online. My attendance at meetings has improved. I’ve gotten to know more of my fellow congregants. A hundred years ago this past September, I tuned in for online Rosh Hashanah and Yom Kippur services with the relative enthusiasm of novelty.

It was suddenly easy to show up for Shabbat morning services. I didn’t even have to get out of bed. I could wear a nice pajama shirt instead of heels and a dress. I could eat breakfast (even a surreptitious bite of bacon — shh!), then wash the dishes as I hummed along. No more side-eye to gauge when to sit after the Amidah. No more counting the pages until kiddush. Unfortunately (or not?), no more free tuna fish either. There was no question that the reward (or lack) of engagement and meaning in prayer would have to come from myself. The choice of being fully present or zoning out became an exclusively internal conflict.

When it came time to commit to this year’s Purim shpiel, I was on the fence. In the pre-pandemic world, my husband and I would be what most consider an anomaly. While not 100% screen-free, we limit computer use outside of work and don’t own smartphones or iPads. Now, between work and remote school, everyone in the family was spending too much of the day online, and that was before the evening smorgasbord of meetings and social events. Did I really want to add another long session every Thursday? Another night of people shouting “You’re on mute” at each other? (Why do we shout at the muted when we are the ones who can’t hear?)

The strange thing is, I did. The cast would be made up of many of the same people who I had become friends with during preparations for the 2020 shpiel.

I no longer even remember if I was a volunteer or voluntold for that one (though I bet the rabbi does). What I do remember is that, I, talentless, tone deaf and shy, had somehow found myself having fun. That being said, my last notable stage appearance was a three-second stint more than 25 years ago to accept a diploma, so the bar wasn’t set very high.

It goes without saying that the past few years have not been typical either for those of us at Tree of Life. With the synagogue closed since the October 2018 massacre, the congregation has remained in borrowed space at Rodef Shalom, a nearby Reform synagogue. When we couldn’t fit there for High Holiday services, neighbor Calvary Episcopal Church generously offered their space. They covered the crosses, brought in the Torahs, and voila. The rabbi, standing on the high lectern to give his Rosh Hashanah sermon, had apparently experienced an epiphany. As he gazed out at the majestic gothic arches, gray stone walls and soaring ceiling, it came to him: “Hershal Potter and the Gansa Megillah!” The church was destined to be the set of Hogwart’s Castle for that spring’s Purim shpiel. It was a once-in-a-lifetime opportunity! The rabbi already had a stuffed owl, which he could envision sweeping down, past the radiant stained glass windows, to the altar/bima/stage.

Best of all, the actors would be drawn from various denominations and faiths, a nod to the many religious communities that had stepped forward with love and support after the shooting. The inclusive cast sounded a bit like the opening to a joke: one rabbi, two priests, a handful of Episcopalians, a Jewish librarian, a Jewish lawyer and a Chinese American dance troupe (dragon included), among others. I made my debut as Professor Lupin, clad in a green cloak and Baby Yoda ears, to an enthusiastic interfaith audience.

During one rehearsal for the 2020 spiel, I remember, I’d stood to the side and watched as the rabbi directed a tiny female congregant, a survivor of the shooting. She was playing the role of Sirius Black and the scene required her to stick her head through a hole in a box, aka our Gryffindor hearth. She began to speak her lines using a silly, deep voice and we all started to laugh. There it was in a nutshell, I realized: Purim, a tale of survival. In spite of it all, we were still here; in spite of it all, we could still laugh.

The moment reminded me of a story that the rabbi had told six weeks after the massacre, at my nephew’s bar mitzvah. A wedding party and a funeral procession, moving in opposite directions, meet on a narrow road. If there’s only one room for one to pass, which goes first? After much discussion, Rabbi Myers explained that the sages decided the funeral should not only step aside, but that it should hide from view, so as not to diminish the joy of the wedding.

So, here we are. “Purim is a story of survival” is a good refrain to repeat aloud (check that mute button) through the network crashes, ghostly heads and background noise of screaming children that plague our rehearsals. I’m not sure how the complicated choreograph of Oz-ian backgrounds will come together, but as I listen to the melodic voices of two of our more talented members, I know it will be worth the effort.

The unwanted adaptation is a familiar scenario for the Tree of Life congregation. But, we also have learned to welcome release, and when we make room for joy, it can have the power to heal. PJC

Molly Pascal is a freelance writer living in Pittsburgh.