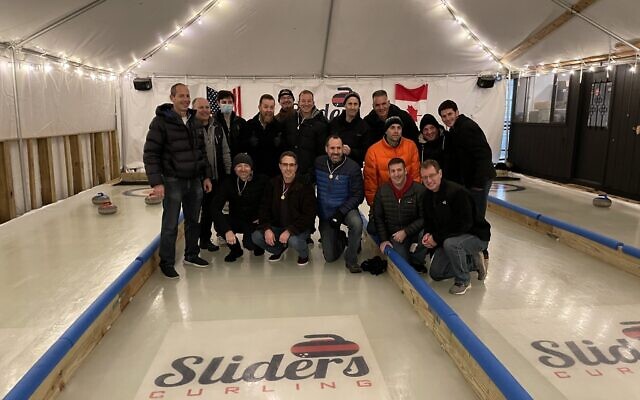 Men spanning the Pittsburgh region took to the ice for curling and friendship. Photo by Evan Stein.

The partner for information technology firm FSA Consulting has a pilot’s license, is working on obtaining his instrument rating (qualifications that a pilot must have in order to fly under instrument flight rules) and is certified as an advanced scuba diver.

“I try to achieve things that most people typically think are beyond their reach,” Stein said.

While Stein’s usual pastimes require a significant time commitment, he has found a way to at least sample some new activities as well.

The Squirrel Hill resident is the newest member of an informal group of primarily North Hills men who get together regularly to try out various activities.

“It’s not a club,” Stein said. “There is no membership or dues. They try to get together once a month and do something fun.”

Hesitant to call himself the founder, Mark Pizov said the group has been in existence for 10 or 15 years. Its core members, he said, are men who met through their children, most of whom attended BBYO and other Jewish youth groups together.

Initially comprised of men from the North Hills, the circle has expanded to include guys from Squirrel Hill and the South Hills as well, Pizov said.

In their most recent outing, the group sampled curling. Other activities have included axe throwing, poker, whiskey tasting, mud races and even shooting. In January, the friends are going to Topgolf, a venue in Bridgeville which features climate-controlled hitting bays.

Yuval Kossovosky said the genesis of the group was when he received an email for the Ruckus Obstacle Race Series — an obstacle course on a mud track.

“I sent a note to Mark and a few other guys and said, ‘This is incredibly stupid. We should do it,” Kossovosky remembered. “It became this defining thing: ‘This is stupid, let’s do it.’”

He said the crew is comprised of a diverse group of Jewish professionals, including company vice presidents, IT experts, dentists and attorneys.

Unable to meet during COVID, the group took an 18-month hiatus. The December curling outing was their first since the beginning of the pandemic.

Stein said the start of the event had a decidedly Jewish flair.

“Right before we got started, Mark pulled out his phone and Zoomed with his family and we lit the Chanukah candles all together as a group,” he said. “We said the prayers and then we started.”

The group, Kossovosky said, is intended to help men connect.

“[Without the group] we wouldn’t see one another,” he said. “We have no overlap on a day-to-day basis. So, this is a way to strengthen community with a Jewish community and have friends.”

The group also provides a chance for the men to network, Pizov said, while ensuring they keep in touch.

“There’s definitely a need for this, for guys to get together,” Pizov said. “It seems like ladies do a better job than guys. My wife was part of a book club and gets together with the ladies once a month. Guys don’t have book clubs or things like that; we like to be more active,” he said.

And while the group is based on participation, the activities are secondary and can be suggested by anyone.

“It’s whoever wants to step up and plan things,” Pizov said. “I did the ice curling thing. Yuval is planning the TopGolf thing and then we’ll go to a bar to watch a game or maybe play poker at someone’s house.”

Kossovosky has another way to describe the group.

“It’s an excuse for a bunch of married guys to go out and not get in trouble,” he said. PJC