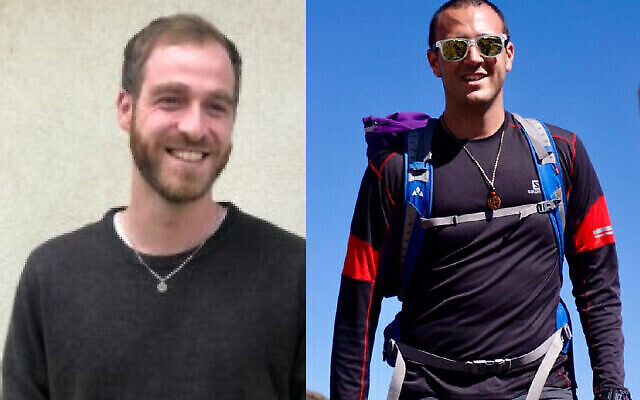 Eytam Magini (left) and Tomer Morad (right) who were killed in a Tel Aviv terrorist shooting attack on April 7, 2022. (Social media via The Times of Israel)

The two victims of the terrorist shooting attack in Tel Aviv were named on Friday as Tomer Morad and Eytam Magini, two friends both aged 27 and originally from Kfar Saba.

The pair were at the Ilka bar on Dizengoff Street Thursday evening when a Palestinian terrorist opened fire at the crowded venue. Numerous others were wounded in the attack.

“Our city is in deep mourning,” Kfar Saba Mayor Rafi Sa’ar said, adding that the pair were childhood friends. “My heart is with the families of the victims.”

“We knew that if we didn’t get an answer after 45 minutes, then it was them,” their friend Avi Benvenisti told the Haaretz newspaper.

He said that Morad and Magini had planned to meet up with some friends at Ilka and got there early.

“When you don’t get an answer after two or three hours, you put two and two together,” the friend said.

Throughout Friday morning, people arrived at the site of the attack to pay their respects, lighting candles and placing flowers.

Another friend, Alon Grossman, eulogized the pair and noted the deep friendship and bond the two had.

“Tomer was a nail, the person who holds everyone together,” he told Channel 12 News. “All the friends were always around him. He was the most prominent.”

Grossman said that Tomer, who was in a relationship, had just finished his college degree and was preparing to find a job.

“He was a loved, happy person,” he said. “Loves to hang out, cook. Eytam and Tomer sat together in that cursed pub and waited for friends. Eytam, like Tomer, was at the center of the bunch. They both held the gang together and they were good friends.”

In a statement, President Isaac Herzog offered condolences to the families of Tomer and Eytam.

“Two young Israelis, two flowers, lost their lives in last night’s horrific attack in Tel Aviv,” said Herzog. “Their only sin was wanting to spend a normal night out.”

Herzog also thanked security forces for catching and killing the terrorist and sent prayers to those wounded in the attack who are still hospitalized. PJC