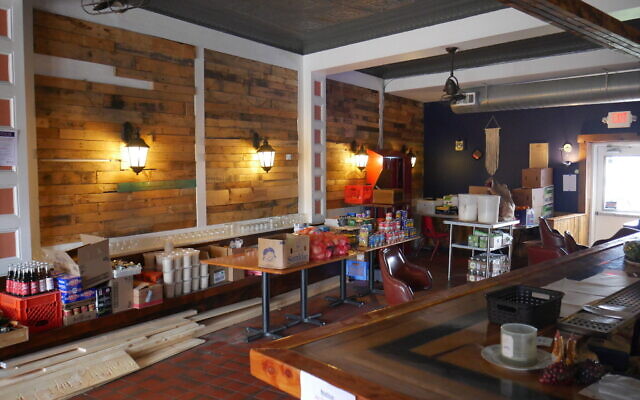 Scratch Food & Beverage has converted into a pay-what-you-can restaurant complete with a small market of household needs. Photo courtesy of Don Mahaney.

Long before the COVID-19 outbreak, Evan Dreyer was “agitated about food insecurity.”

“I’ve never gone to bed hungry, except maybe on Yom Kippur and Tisha B’Av,” explained the South Hills resident, “and this is something I view as an American disgrace.”

Over the years, Dreyer and his family have volunteered at soup kitchens and with Meals On Wheels.

When the pandemic began to affect Western Pennsylvania, Dreyer, an ophthalmologist, said he found himself with more free time and a growing desire to help.

“I came across an article about restaurant workers being furloughed and laid off and decided to see if I could find out anything about that,” he said.

Dreyer, the co-owner of Glaucoma Cataract Consultants, found a restaurant workers’ support site online which eventually led him to Don Mahaney, the owner of Scratch Food and Beverage in Troy Hill.

When the effects of the pandemic began to be felt in Pittsburgh, Mahaney became concerned “that people who were food insecure would have to compromise themselves in some way to get their daily needs met.” So, Mahaney transformed Scratch into a pay-what-you-can restaurant and opened a small market, also operating with a pay-what-you-can model for “everyday household needs.”

“We started working with the Greater Pittsburgh Restaurant Workers Mutual Aid Group and the Allegheny YMCA to get food to people who have no means,” Mahaney explained. “Then we partnered with a couple of other organizations including Wesley Family Services, helping to service seniors and get them groceries.”

When Dreyer learned about what Mahaney was doing, he decided to help with Scratch’s mission and set up a GoFundMe page to collect donations.

“I’m not really much of a fundraiser,” Dreyer said. “I would rather have dental work without anesthesia than call people and ask them for money, but this is something I believe in and figured I would give it a shot.”

Dreyer reached out to his friends and acquaintances. “I contacted everyone in my email contacts, most of the folks in my professional circle and whoever was on my Facebook page.”

The campaign raised more than $2,000 and, through Dreyer’s own matching contributions, now totals almost $4000 in donations. That money is going directly to Scratch Food & Beverage and the meals it is providing to the community.

Mahaney said the impetus to use Scratch as a vehicle to help those in need happened before he closed his doors on March 13.

“I saw what happened in Italy and what was beginning to happen in New York,” he said, adding that it was his understanding of the food distribution chain that made him say, “Oh God, we need to do something, and we need to do it quickly.”

Because farmers don’t grow food for local populations, but instead grow one crop for big contracts, when those contracts are gone, farmers are unable to distribute food elsewhere, according to Mahaney.
“Now, dairy farmers are dumping milk on the ground and taking pigs and chickens to slaughter with no market afterwards,” he said. “That does a lot to the cost of those foods.”

Mahaney’s goal is to do more than just provide food for those in need.

“I don’t want to go back to where we were,” he said. “I want people to have a strong and visceral tie to their local food growers. That drives the cost down.”

Scratch distributes more than 2,000 meals a week throughout Allegheny County, according to Mahaney. About half of the meals, which are delicatessen style sandwiches that come pre-packaged but unassembled, are paid for through donations.

Mahaney anticipates opening his restaurant at some point now that Allegheny County has moved into Governor Tom Wolf’s green phase, but he does not expect to see “full dining rooms in in the near future. There is just no way that we’re ever going to be seeing our dining room space filled with people until it’s utterly safe for that to happen. So, we need to make a lot of modifications here.”

“Would I be this passionate if I were Catholic? Probably,” he said. “But I happen to be an observant Jew, and this Is part of me.” PJC