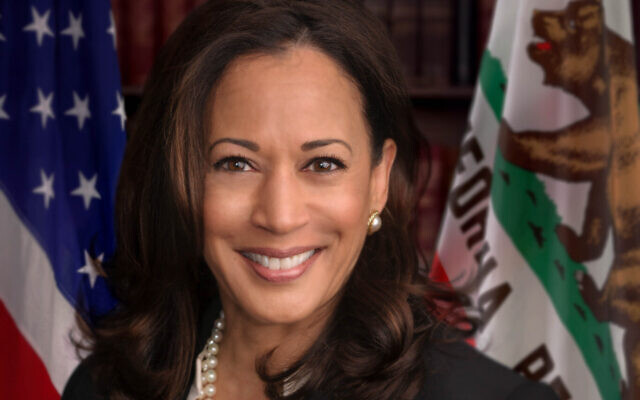 NEW YORK — From the moment Kamala Harris was introduced as the vice presidential nominee for the Democratic Party in August, US President Donald Trump and the Republican Party launched a campaign attempting to brand her as a “radical” politician who would pull Joe Biden to the far left.

In picking Harris, Trump told his supporters at a September rally, Biden had struck an “unholy alliance with the most extreme and dangerous elements of the radical left.”

The 77-year-old Biden, elected the 46th president of the United States after four days of vote counting on Saturday, has described himself as a “transition” candidate, and in picking Harris, placed her rather squarely at the front of the line to serve as his successor.

On certain issues, Harris may indeed outflank the president-elect, but Israel is definitely not one of them.

In fact, the vice president elect’s record on the Jewish state indicates that she may be even more hawkish than Biden, who has sought throughout the campaign to differentiate himself from the progressive wing of the Democratic party.

JNF over J Street
Harris has only been on the national stage since 2017, but the stances she has taken in her three years as Senator place her rather squarely in the traditional pro-Israel camp of her party.

The first resolution she co-sponsored as a senator was one effectively condemning the Obama-Biden administration’s decision to abstain on a UN Security Council resolution condemning Israeli settlements in the West Bank.

Harris highlighted the co-sponsorship in a 2017 speech at AIPAC’s policy policy conference, saying it would help “combat anti-Israel bias at the United Nations and reaffirm that the United States seeks a just, secure and sustainable two-state solution.”

“So having grown up in the Bay Area, I fondly remember those Jewish National Fund boxes that we would use to collect donations to plant trees for Israel,” she said later on in the speech referencing JNF, whose sister group in Israel KKL-JNF has been embroiled in legal battles to evict Palestinian families from their homes in East Jerusalem.

That address was just one of three times Harris spoke at AIPAC, which has fallen out of favor with a growing number of Democrats. More of them tend to prefer the progressive lobby J Street, which believes pressuring the parties is necessary to start peace talks.

More than half of Senate Democrats receive endorsements from J Street. Harris was not among them. Her only association with the group was in November 2017, when she was one of 17 local and federal politicians on the host committee of a party thrown by J Street’s Los Angeles chapter. Biden, on the other hand has spoken at J Street conferences several times and addressed the group at a fundraiser in September.

Careful critic
While considering him a close friend, Biden has not shied away from criticizing Prime Minister Benjamin Netanyahu, and has joked about not agreeing with “a damn thing” the premier says. Harris on the other hand has yet to publicly spar with Netanyahu, who several democratic candidates went as far as to call him a “racist.”

Asked about the prime minister’s plans earlier this year to annex large parts of the West Bank, Harris told Pod Saves America last year that she is “completely opposed” to the move and would “express that opposition.” However, she avoided calling out Netanyahu by name.

Pressed on what kind of diplomatic pressure she would support exerting on Israel to advance peace talks, Harris declined to give specifics.

“Well, there are a number of things. But it has to be about opening a channel of communication that is honest and not informed by a lack of information or a lack of historical perspective or a lack of concern. And I think that all of those are concerns that we should have about the current administration,” she said.

Harris did however pen an open letter to Trump, warning that annexation could cause “serious conflict, the further breakdown of security cooperation with Palestinian security forces, and the disruption of peaceful relations between Israel and her neighbors, Jordan and Egypt.”

She met with Netanyahu in 2017 in the most recent of three trips she’s made to Israel. She was slated to meet Palestinian Authority President Mahmoud Abbas as well, but Ramallah canceled the meeting hours after the Trump administration threatened to close the diplomatic mission of the Palestine Liberation Organization in Washington.

In a statement given last week to the Arab American News site, Harris vowed that a Biden-Harris administration would reopen that PLO mission along with the US consulate in East Jerusalem in addition to taking “immediate steps to restore economic and humanitarian assistance to the Palestinian people and address the ongoing humanitarian crisis in Gaza.”

Still, she has not gone as far as to label Israel as responsible in any way for that humanitarian situation.

Asked in 2019 by the New York Times “whether Israel meets international standards of human rights?” Harris responded, “overall yes” while adding, “I think Israel as a country is dedicated to being a democracy and is one of our closest friends in that region, and that we should understand the shared values and priorities that we have as a democracy, and conduct foreign policy in a way that is consistent with understanding the alignment between the American people and the people of Israel.”

She did offer a slightly more critical response when speaking to the American Jewish Committee later that month. “Let me be clear: I support the people of Israel. And I’m unambiguous about that. I’m supporting the people of Israel does not mean, it should not be translated to supporting whoever happens to be in elected office at that moment,” Harris said, refraining from identifying Netanyahu by name.

“And so, my support of Israel is strong and it is sincere. There is also no question that we must speak out when human rights abuses occur. We must work with our friend, which is Israel, to do those things that we collectively know are in the best interest of human rights and democracy because it is that shared commitment to democracy from which the relationship was born and so we have to hold on to that,” she added.

Still, her former communication’s director told McClatchy last year that Harris’s “support for Israel is central to who she is.”

Jerusalem Syndrome
In June 2017, Harris voted for a unanimously passed resolution marking the 50th anniversary of the 1967 Six-Day War. The resolution expressed support for 1995 legislation that deems Jerusalem as the “undivided capital of Israel.” Palestinians view East Jerusalem as the capital of their future state.

During her trip to Israel that year, Harris visited East Jerusalem’s Al-Quds University and met with a group of female students. Halie Soifer, who served as Harris’s national security adviser at the time and accompanied her on that trip told The Times of Israel that the students shared their experiences about growing up in the midst of a conflict and dealing with a West Bank security barrier that runs through their university, which had an impression on Harris.

“She encouraged [the students] to be leaders in their communities and they were inspired by her,” said Soifer, who now heads the Jewish Democratic Council of America.

While being an ardent supporter of the two-state solution, Harris has also adopted a favorite talking point of Netanyahu on the matter, telling the Jewish News of California in 2016 that lasting peace requires the Palestinians to recognize Israel as a “Jewish state.”

Progressive Bonafides
Harris has diverged from Washington’s pro-Israel lobby at times. Citing free speech concerns, she voted against the Israel Anti-Boycott Act that would have criminalized boycotting the Jewish state.

“Senator Harris strongly supports security assistance to strengthen Israel’s ability to defend itself,” her office said last year. “She has traveled to Israel where she saw the importance of US-Israeli security cooperation firsthand. She opposed [the act] out of concern that it could limit Americans’ First Amendment rights.”

While Harris was not in the Senate to vote on it in 2015, she has supported the Iran nuclear deal and aligned herself closely with Biden’s position on the Obama-brokered multilateral agreement, which the Netanyahu government has aggressively opposed.

At last month’s vice presidential debate, Harris criticized the Trump administration’s decision two years ago to pull out of the nuclear deal, saying it “has put in a position where we are less safe because they’re building up what might end up being a significant nuclear arsenal.”

“It was a solution, imperfect though it may be, and it involved many partners not just the United States and Iran,” she told Democratic Majority For Israel last year. Then, while still a presidential candidate, she vowed to re-enter the deal while “extending the sunset provisions, including [on] ballistic missile testing and also increasing oversight.”

Two peas in a pod
Despite Harris’s seemingly more cautious approach on Israel, her former aide Soifer insisted that the vice president-elect is “squarely aligned” with Biden on the Jewish state.

“The only difference between the two is the amount of time Joe Biden has been working on this issue,” Soifer maintained.

The former national security adviser pointed out that even before they became running-mates, Biden and Harris were among a handful of candidates who opposed conditioning or cutting US military aid to Israel.

“What truly unites them on this issue is that they see the relationship as being beyond this current political moment,” Soifer said. “Trump has very much personalized and politicized the relationship, and that’s not how a Biden-Harris administration will confront the issue.” PJC