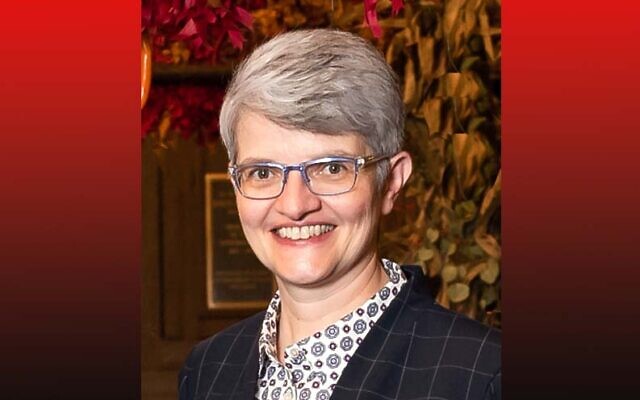 While standing at Rodef Shalom Congregation’s bimah for her daughter’s bat mitzvah in 2019, Valerie Monaco felt a spiritual closeness to the Torah and knew at that moment that she, too, wanted to chant from the holy scroll.

“I looked over her shoulder at the Torah and heard her chant and I was like, ‘This is very special,’” Monaco recalled. “I wanted to experience it as well. I became interested in being able to connect with Judaism on that level.”

Monaco didn’t have the opportunity to become a bat mitzvah as a teenager. She grew up in a Protestant home and attended Catholic high school before marrying Deb Polk, who is Jewish. In 2013 Monaco converted but had missed many of the life cycle events experienced by those born into the faith.

Shortly after her daughter’s bat mitzvah, Monaco, who is active at Congregation Bet Tikvah and Rodef Shalom, began preparing for her adult bat mitzvah with Rabbi Sharyn Henry.

As the Yiddish saying goes, “Man plans, and God laughs.”

Monaco’s in-person bat mitzvah training was soon forced online due to the pandemic. The experience wasn’t optimal, but it helped her develop an award-winning idea using Sefaria, the popular online digital library featuring the Torah, Talmud and other Jewish texts.

“I thought, maybe there’s a way that we can be looking at things together, using Sefaria and Zoom, and share the screen,” Monaco said. “I just started thinking about it from that perspective.”

Monaco, who works as a senior data analyst for the City of Pittsburgh and has graduate degrees in psychology and human-computer interaction, began thinking about Torah, trope and its intersection with technology.

While seeking online trope resources, she realized that audio clips could be combined with four verses of Torah text in a Safari resource sheet.

“I thought, that’s pretty cool,” Monaco said. “And you can highlight things in Sefaria. I thought, well, this is a pretty neat way to pull things together and really leverage the power of Sefaria.”

The fruit of Monaco’s work was an 18-page instruction booklet so others could replicate what she had done. And realizing that most people are unlikely to navigate through what might be viewed as an unwieldy resource, Monaco created the Torah Chanting Source Sheet Generator.

Visitors to the Sefaria website enter the Torah chapter and verse they are studying and a source sheet is generated listing the verse in Hebrew and transliteration along with audio files.

Unfortunately, Monaco finished the project in August 2021, just a few weeks before being called to the Torah for the first time on Sept. 24, 2021 — meaning she didn’t have much time to use the project for her own studies.

She was, however, able to enter the project in Sefaria’s “Powered by Sefaria” contest. The contest awards users who find unique and meaningful ways to use its open-source program and free digital dataset of Jewish texts, translations and interconnections.

On Feb. 6, Monaco was notified that she won the “Women in Tech” category.

In addition to all the naches that accompany such an award, Monaco earned a prize of $5,000.

“It’s sort of a ridiculously large award and clearly that motivates people,” Monaco said. “But really, I wanted to get the ideas out of my head and onto the screen. It was great they held the contest because it is motivating to have the time structure and an end-goal.”

Just as satisfying as the prize, Monaco said, is knowing that Sefaria can promote the program, which can give a boost to the website.

Russel Neiss, Sefaria’s senior project engineer, said the Powered by Sefaria contest helps promote Judaism and technology, and that Monaco’s project was interesting because it combined audio files and text.

“It created a really interesting opportunity for someone who was not familiar with this sort of really difficult mimetic tradition to become more attuned to it through this little sort of technological advantage. It was really nice,” he said.

“It’s our little way of trying to live by the values we espouse,” he said.

Polk, Monaco’s wife, said the award has generated a lot of familial pride and that while she was proud of her spouse, she wasn’t surprised.

“Because I know she does amazing quality work and this was really in her wheelhouse,” Polk said. “She had a great idea and the skills necessary to execute it. I think that it’s really wonderful.” PJC