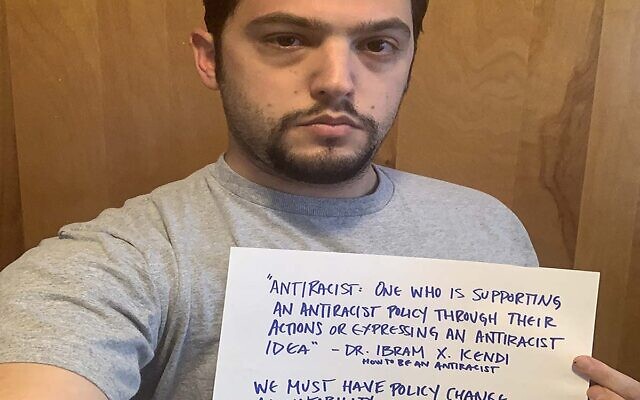 Rabbi Jeremy Markiz has called on Jewish activists to mark the end of the first week of mourning for George Floyd by fasting on Tuesday, June 2.

Markiz, the director of Derekh and Youth Tefillah at Congregation Beth Shalom said that fasting would serve to focus attention and intention on Floyd’s death.

“There’s not a point in the day when I won’t think of George Floyd and Antwon Rose and my black friends and neighbors because all day long, my body will be reminding me,” he said.

Floyd, an African American, died on May 25 while being arrested by four white Minneapolis police officers, one who was subsequently charged with third-degree murder and second-degree manslaughter in relation to Floyd’s death.

The Conservative rabbi created the event on his personal Facebook page and used both his Twitter and Instagram accounts to promote the fast. Almost 500 people, from across the country, have expressed interest in the event or indicated that they would be joining with Markiz as a show of solidarity and to refocus on “acts of justice and commitments to change and prayer.”

For Markiz, the fast is simply a starting point. “If people fast but they don’t actually do the work of reading books and building relationships and calling for change then they’ve missed the point,” he said.

Markiz is quick to point out that there is no right way to show solidarity with people of color.
“This is one of many. It’s not better or worse” than other actions, he explained. “But I think inaction is not an option.”

Markiz cited Leviticus 24:22, “You shall have one standard for stranger and citizen alike: for I the Lord am Your God,” as a Torah text supporting the idea that justice must be applied equally to all.

“Justice for some is justice for no one,” he said. “We saw white protesters with automatic weapons being treated with dignity and respect, and after a murder of a of a black man, that same dignity and respect wasn’t being employed. And so to me, it’s clear that the treatment is not the same. And that’s just untenable.”

In a Google Doc Markiz created for the public fast, he listed several ways for those interested to become more involved including reading books about racism, “getting to know your neighbors, supporting local black organizations and bolstering police review boards.”

Markiz felt it important to call for a public fast, not as a rabbi of Congregation Beth Shalom, but rather as an individual trying to find a meaningful way to show solidarity and support for the black community through Jewish tradition.

“There is so much about the black experience in America that I don’t have,” he said. “I don’t know what it’s like to be afraid; to know that my neighbor might treat me differently. To not be able to exercise safely. I don’t have any of those real lived experiences.

“As Jews we use fasting as a way to refocus on the things that matter.” PJC