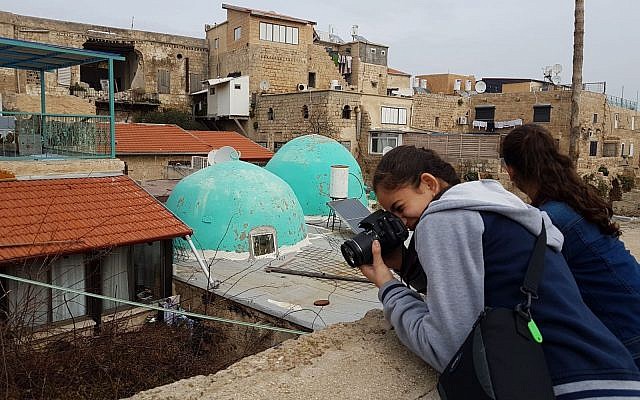 Jewish and Arab students gain self-confidence while learning coexistence at the Akko Center for Arts and Technology. (Photo courtesy of Mark Frank)

“Shared society” was the name of the game Sunday, as members of four Pittsburgh congregations gathered on Zoom to hear updates on how a locally-inspired project is sparking dialogue among Israeli Arabs and Jews in the Western Galilee.

Mark Frank — a former Jewish Federation of Greater Pittsburgh board member who serves as chairman of the Northern Israel Center for Arts and Technology — led much of the discussion; he was joined by Naim Obeid, CEO of the Akko Center for Arts and Technology (ACAT), and Bill Strickland, president and CEO of Manchester Bidwell, whose Bidwell Training Center on Pittsburgh’s North Side was a model for the center in Akko.

“We are more alike than we are different,” said Strickland at one point, echoing a familiar theme for the morning. “The key is to build a world-class environment with world-class faculty, [and] we believe this is the focal point for the work we are now doing in Israel.”

ACAT has served 2,449 students — about half of them Jewish and half of them Arab. About 17% of the Arab population in Israel self-identifies as Palestinian, but Obeid, in response to an audience question, said the Akko facility is too far from Gaza or the West Bank to reach larger Palestinian audiences. Instead, it focuses on Israeli youth and adults in northern Israel.

The students that ACAT serves learn photography, filmmaking and 3D printing, as well as disciplines that can lead to home-based businesses such as cosmetology, locksmithing, and security system installation and maintenance, Obeid said.

The big mission, however, is getting both sides of the Israeli dialogue talking. To that end, the center has contributed to promising statistics, according to event organizers. In general, about 30 to 34% of Israeli Arabs say they “understand the perspective” of Israeli Jews, and Israeli Jews answering that question reflect roughly the same percentage, Obeid said. At ACAT, a recent survey asking about “understanding the perspective of the other side” came in at 76%.

“I’m not saying it’s easy, but it’s doable,” Obeid said. “They learn the basic skills of accepting each other.”

Strickland’s Bidwell Training Center paved the way for the port city of Akko’s project and soon might be opening a similar facility in Belfast, Northern Ireland, Strickland said. Students at his North Side center, located in one of the city’s most crime-ridden neighborhoods, learn photography, music editing and cooking, as well as practical job skills like quality assurance.

“Hope is hope — and we manufacture that product at our centers in Israel and, soon, in Belfast,” Strickland said.

“We are always happy to hear ‘hope’ and ‘Israel’ in the same sentence,” she said.

The event was billed as a discussion on how organizations foster a hopeful future, provide economic opportunities and break down ethnic, religious and cultural barriers for youth and adults in Israel while improving the socio-economic status of the region’s diversified community. PJC