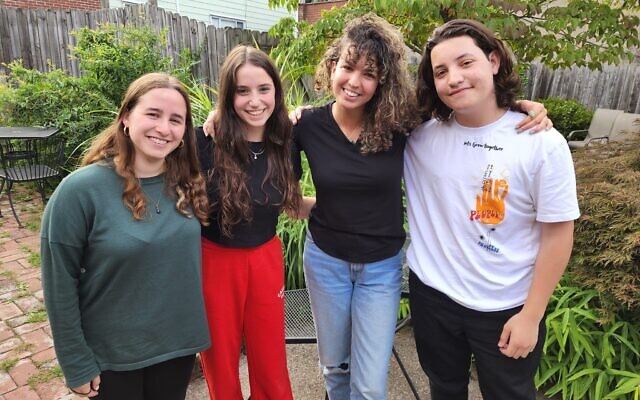 Since arriving from Israel last week, the four young ambassadors have begun exploring the community and creating new connections. The 18-year-olds, who deferred a year of Israeli military service to volunteer, will spend their time helping educators at Community Day School, the Jewish Community Center of Greater Pittsburgh and religious schools throughout the area.

These responsibilities, the teens explained, require more than simply teaching bright-eyed American children cheery Hebrew songs. They hope to introduce young Pittsburghers to young Israelis and, in turn, share insight into each other’s passions and practices.

Before joining the Jewish Federation of Greater Pittsburgh-supported program, Michal Dekel and Shahar Kurland were both familiar with western Pennsylvania. Dekel is from Karmiel —Pittsburgh’s Partnership2gether’s sister city — and was a Diller Teen Fellow. She was supposed to visit Pittsburgh in 2020 but was unable to due to the pandemic. Despite never visiting Pittsburgh before last week, however, Dekel said she met several teens and local residents through Zoom and had heard about the city’s beauty.

Kurland is also from Karmiel and said her knowledge of Pittsburgh and its Jewish community stems from attending Emma Kaufmann Camp three years ago.

“Pittsburgh is so green,” she said. “You can breathe and be relaxed. And I know that you say it’s big and noisy, but I think Pittsburgh is quiet.”

Einav Mayer is from Kibbutz Dovrat in northern Israel. Before beginning the Shinshinim program, he didn’t know much about Pittsburgh. Since arriving, however, he’s found that his musical bent will be appreciated here; the family he is staying with is a musical bunch, and he’s been able to practice piano in their home.

Bar Zeevi is from Midreshet Ben Gurion in southern Israel. Like Mayer, she had little knowledge of Pittsburgh before joining the program. Even so, she said, she researched local Jewish life and was delighted to discover how those of different denominations share spaces and join in activities together.

“What I read is that the community is a mix of Conservative, Orthodox and Reform, and I thought it was really cool because each one of us could find their own place inside the community,” she said.

The English-speaking teens have different interests, which will help create inroads throughout the community. Dekel enjoys traveling and reading books about philosophy or biblical commentary. So whether it’s during a discussion about a weekly Torah portion or a specific region of Israel, Dekel said she is excited to share her knowledge and learn from others.

Kurland is an athlete and makeup artist and is eager to show American youth how Israelis experience high-energy activities like dance, gymnastics and Muay Thai. Purim, she added, is a perfect time to share her love of makeup and hair braiding.

Mayer said he knows that music is a great means of introducing children to a new language or another place, but he hopes to do even more with his talents.

“I think that music is something that brings the community together, even if it's not related to learning Hebrew,” Mayer said.

He’s hoping that during the year there will be opportunities for fellow musicians to play together, as those experiences aren’t only educational but “just fun in general,” he said.

Zeevi is an artist with an ability to sew, paint and weld. Back home, during Adloyada (an Israeli parade marking Purim), she oversaw costume design — a responsibility that required her to begin helping participants as early as two months before the holiday. Zeevi said she’d love to see a citywide arts-filled Purim parade, like those in Israel, but is also keen on introducing students to paint and other expressive materials when discussing the Jewish state. 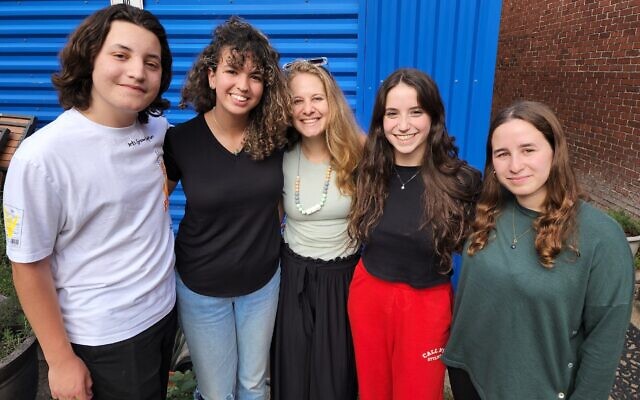 As excited as the 18-year-olds are to begin working with local youth, there’s a certain level of fear that goes along with being a part of the Shinshinim program.

“It's kind of scary because if they don't like me I don't want them to hate Israel,” Dekel said.

Representing an entire country is a “big” responsibility, she added. “It’s stressful because we don’t necessarily know how to handle some of the arguments [people may want to have]. We also don’t want to get into politics because it’s not our job.”

Risa Kelemer, Federation’s Shinshinim coordinator, said the young adults are not here to serve as formal educators but rather “18-year-olds who just graduated high school and are able to create those kinds of very natural connections with kids in the same age group essentially.”

Even so, the Shinshinim said the task is worrisome.

“We’ve come to represent Israel and, for some people, that’s already a reason to argue,” Dekel said.

If people wish to challenge the Shinshinim about Israeli politics or policies, Kurland is nervous about her ability to respond in English.

“This language is not my first language,” she said. “I cannot [articulate] my ideas like I would in Hebrew, and that’s hard because sometimes people can’t understand me when I say something.”

Kurland is also concerned about the cultural differences that can affect conversation.

“I think that in Israel you can say everything because in Israel this is what we do,” she said. “But like when you say something a little bit harsh here people can be sensitive about that and maybe get very defensive.”

“While I've lived in Israel my entire life, and I've experienced many parts of it, I'm scared that I wouldn't be able to answer every question that everyone has about the country,” he said. “I'm not an expert on everything, even though I live there, and I just don't want to spread misinformation about things.”

Zeevi said that she and the other Shinshinim agree there’s at least one major concept that Americans need to be understand.

“There's a difference between Israel the country, the government, and the people in Israel,” she said. “That's a really big difference that people are not very aware of.”

Along these lines, the Shinshinim appreciate that working with a younger demographic may require responding to inaccurate information they see online.

There is a lot of “fake news on social media,” and although Israel, and Israelis, may be often maligned online, Zeevi said she hopes that by spending time together the Shinshinim and American youth will gain greater insight into one another.

Part of their “mission,” Kurland said, is predicated on understanding American Jewish practices: “We need to learn how you live and how you make your traditions. And we need to bring this to Israel.”

Whereas bolstering Jewish peoplehood is a program element Kelemer said that the Shinshinim “serve as a bridge not only between Israel and Pittsburgh but also between different institutions — because there are very few people in the community who migrate between CDS and all the Hebrew schools and the JCC.”

Given their “bird's eye view of the community,” Kelemer is eager to see what the 18-year-olds accomplish in Pittsburgh.

The Shinshinim are “talented, they are energetic, they kind of reinvigorate every institution that they're a part of,” she said. They “come in with fresh ideas, a fresh mindset and a different way to connect and speak about the conversations that we're already having in the community.” PJC