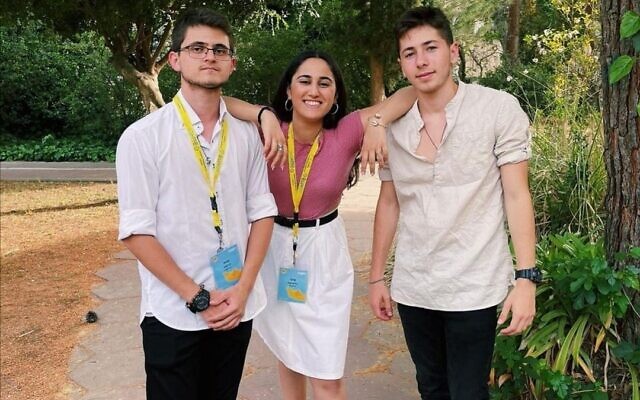 After a 17-month hiatus, the shinshinim program was revived, and three young Israelis have arrived in Pittsburgh to share their culture and perspectives on the Jewish state.

The shinshinim (an acronym for “shnat sherut,” a Hebrew phrase meaning “year of service”) are teenage emissaries from Israel who delay their mandatory military service for a year to volunteer either in Israel or somewhere in the Diaspora. Amit Haizler, Shahaf Balasiano and Itai Rovnick, all recent high schools graduates, will bring a taste of Israeli life to young Pittsburgh Jews, thanks to a joint program of the Jewish Federation of Greater Pittsburgh and the Jewish Agency for Israel.

All three shinshinim have spent time abroad before, and Haizler and Balasiano previously visited Pittsburgh as part of the Diller Teen initiative. They are both from Misgav, Pittsburgh’s sister region in Israel, while Rovnick lives in Eshtaol, a small village near Beit Shemesh. They all have experience working as counselors and guides in Israeli youth movements, and are excited to collaborate closely with a number of Jewish children’s organizations while in Pittsburgh, including Community Day School.

“At the day school, I hope to work with younger children, like kindergarten to second grade,” Haizler said. “I really love working with little kids and I did that a lot in Israel.”

During their year in Pittsburgh, the shinshinim will work at CDS four days a week, partnering with teachers in the Hebrew department. They will also lead elective courses at the Joint Jewish Education Program of Pittsburgh — a Jewish complementary school for students in grades K-8 — and will work with teens in the Jewish Community Center of Greater Pittsburgh’s Second Floor. Finally, they will finish out their year of service as madrichim, or counselors, at the Emma Kaufmann Camp next summer before heading back to Israel next August.

The goal of the shinshinim is to have a broad, yet deep, impact on the community, said Kim Salzman, director of Israel and Overseas Operations at the Jewish Federation of Greater Pittsburgh.

“In a year when youth aren’t necessarily traveling to Israel, it’s really important for us to be doing Israel engagement on the ground in Pittsburgh, and the shinshinim are incredible emissaries because they’re young and dynamic and come from diverse backgrounds,” Salzman said. “They can share their Israel with youth in a way that adults can’t, so they’re really critical in keeping that connection with Israel alive and strong.”

“My goal is to give American Jews valid and true information about what is really happening in Israel,” he said.
“People in the U.S. only know the bad parts about diversity in Israel, but I would like to show how diversity in Israel succeeds and how we live in peace most of the time with everyone, including Orthodox Jews, Arabs and Christians.”
Balasiano wants Pittsburgh Jews to think of Israel as a second home.

“I want to be able to share with a Jewish community my point of view about Israel, Israel’s values and culture, and make them feel they have a home and a safe place to go to anytime in Israel,” she said. “There are so many subjects that no one wants to talk about regarding Israel, but I would like to open a discussion about them.”

Each of the shinshinim will bring their specific talents and interests to the work they do over the year. Balasiano’s background is in theater and dancing; Rovnick is focused on environmental conservation and photography; and Haizler studies computer science and plays the ukulele.

“I hope to bring music into my classes,” Haizler said. “I want my lessons to be based on Israeli songs and poems so I can bring music from home to the kids in Pittsburgh.”

Despite being busy with all of their community engagement efforts, the three will still make time to be teenagers while in Pittsburgh, skiing with their host families, attending a Justin Bieber concert and spending time with students their own age at the Hillel Jewish University Center. Balasiano is excited to make new friends, while Haizler would love to dress up in formal clothing and go to a traditional American school dance. Rovnick is looking forward to living in a city.

“I come from a small place near a city, but living in the actual city, living within walking distance from an actual store, is exciting,” he said.

In March of 2020, the Federation had to send that year’s shinshinim home to Israel since they weren’t prepared for their work to go virtual. This year, contingency plans are in place.

“If we have to go virtual, hopefully the shinshinim will remain in Pittsburgh and work in pods and smaller groups, and do online programming,” said Risa Fruchter, the Federation’s shinshinim coordinator. “We can definitely create dynamic, impactful virtual programming if needed.”

For now, the shinshinim will be doing their work fully in person, closely following CDC guidelines and the individual guidelines of each organization.

Rovnick’s departure from Israel has been delayed for a week because he contracted COVID. He will be joining Haizler and Balasiano in Pittsburgh once his symptoms, which are mild, clear and he’s no longer contagious.

The three teenagers experienced COVID in Israel much like many people did in the States. Haizler’s parents worked overtime as healthcare employees, staying at the hospital during Shabbats and struggling with a lack of proper equipment and bedspace; Balasiano enjoyed extra time at home with her sister, a soldier in the Israeli army, though she regretted the circumstances that led to that extra time; and Rovnick helped distribute donated food to elderly people in his area, even going the extra mile to pick up their daily medications and cook meals for them.

When asked if they were worried about traveling to the States while COVID cases are still surging, Rovnick put it simply: “COVID is not a reason to not come. We’re showing Israel in a better perspective and we’re doing a job that needs to be done.” PJC