A year ago, Eli Marcus couldn’t avoid videos and posts denigrating Israel. As the Jewish state endured 11 days of rocket fire from Hamas, Marcus, 16, saw a bevy of anti-Zionist messaging last May.

“It was all over the place,” he said.

On Instagram, Snapchat and TikTok, Marcus saw a deluge of content concerning the Israeli-Palestinian conflict. He said he spoke with friends about numerous posts — including those repeating the mantra “Israelis are terrorists” — and tried learning more about the sentiments conveyed.

Jess Daninhirsch, 18, said she “distinctly” remembers that period and “how everyone was spewing their thoughts on the matter.”

Daninhirsch largely used Instagram last summer and said her feed included so many posts “from different sides” that usage of the platform became “overwhelming.”

“I didn’t know what to think,” she said. “I was still trying to do my own research.”

Despite wanting to learn more about the conflict, Daninhirsch ultimately stopped commenting about it.

“A lot of people were asking me things about Israel, and my opinion, and what I received had a lot of antisemitic undertones,” she said. “I didn’t feel comfortable talking about it except with family.” 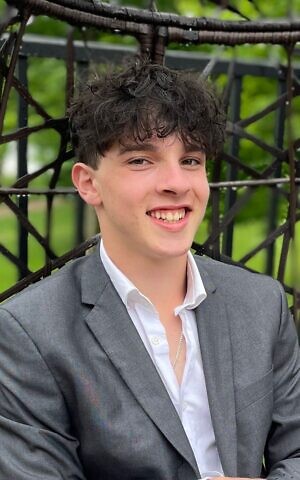 For young adults and those trying to parse the bristly history of Israeli-Palestinian relations, social media created more tension. Startling graphics, content and data seeking to sway users’ opinions were widely circulated. But as The Washington Post reported, many videos of last year’s attacks were taken “out of context.”

A prominent example included a 21-second video posted to Twitter on May 10, 2021, of yarmulke-clad men dancing, singing and waving Israeli flags before the Western Wall as a fire burned near the Al-Aqsa mosque. The video received 15.5 million views, with an early explanation of the content indicating that Israelis were celebrating the flame-engulfed mosque — and a later explanation noting that Israelis were celebrating Jerusalem Day and that Palestinians had ignited a tree near the compound after releasing fireworks. As explanations of the video unfolded, more than 25,000 posts followed. Twitter users described the scene as one of “barbars,” “Nazis” and “Fascists celebrating their version of Kristallnacht.”

Other Twitter users called the comments “lies” and “misleading.”

Social media posts aren’t just digital screeds or senseless noise. Researchers and educators point to online activity as an indicator of societal trends and shifting attitudes. Even before the pandemic, teens spent more than seven hours a day on screens, not including time spent on school work, according to Common Sense Media.

Pew Research Center reported that Americans aged 18-29 most commonly get their news from social media.

“This is where these kids live,” she said. “And whether we like it or not, they form opinions based on what they’re seeing.” 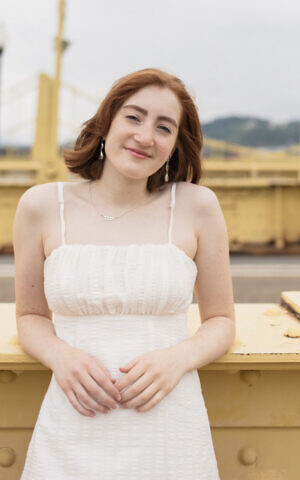 While he and his friends largely rely on Instagram for news, Perry said the majority of posts regarding Israel weren't positive.

Perry said he knows that “when you see something on Instagram it’s not always true,” but that he was perplexed why others responded differently to infographics and imagery about the conflict: “I was often confused when I saw some of my Jewish friends not supporting Israel the way I supported Israel.”

Ultimately, Perry concluded that people’s opinions were shaped by their educational experiences.

Attendance at BBYO’s International Kallah last summer and year-long participation in the organization’s Global Israel Fellowship gave him greater insight into the conflict. Conversations with Palestinians, educators and experts in the Middle East, made clear that “there are a lot of issues, and Israel does play a part in some of those,” Perry said. “Israel could be doing a better job with how it’s handling the situation.”

Perry’s understanding of the dynamic between Israel and the Palestinians has “evolved,” he said, but his commitment to the Jewish state remains the same: “I am a pro-Israel Zionist
student, who will defend Israel, but I will acknowledge its problems.”

Tsipy Gur, founder and executive director of Classrooms Without Borders, called on educators and members of the Jewish community to recognize younger people’s shifting attitudes toward the 74-year-old Jewish state.

Hurowitz agreed, saying, “Generations prior to mine, and up to it, I think still look at Israel as David, and our kids are like, ‘No, Israel is Goliath.’”

A Pew report last week echoed Gur and Hurowitz’s remarks when finding that U.S. adults under age 30 hold attitudes that are “as favorable toward the Palestinian people and government as toward Israel.” The sentiment represented a stark generational contrast; among those aged 65 and older, 78% feel favorably toward Israelis and only 47% feel favorably toward Palestinians. 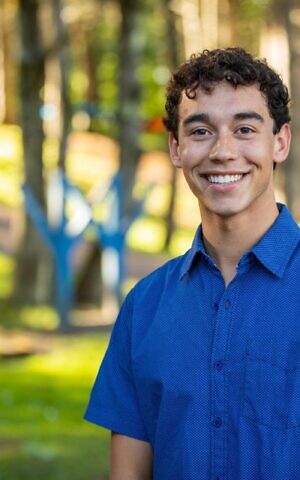 Ignoring the data is tantamount to failure, Hurowitz explained.

“For us to not realize that that shift has happened means that we will never be able to have the conversations that will bring them back,” she said.

Liron Lipinsky, vice president of enrichment strategy at BBYO, said the organization has taken a twofold approach to helping young adults navigate the Israeli-Palestinian conflict. The first strategy is based on enrichment. Through education, dialogue and seminars, BBYO is providing “content” for teens to form their own opinions.

“Young people’s relationship with Israel is going to change, because they will change and what they want from Israel and Israelis is going to change,” Lipinsky said. What’s imperative for teens to understand though is that “Israel is a real place, governed by real people, and some of the decisions are good and some are more challenging.”

For the past decade, Alana Ebin has concentrated on helping Jewish teens strengthen their relationship with Israel. She serves as BBYO’s director of Global Israel Fellowship, and has worked as an educational consultant and director of Jewish enrichment for the organization and program director for Diller Teen Fellows.

Ebin’s efforts have given her insight into young people’s mindsets.

The larger Jewish world needs to understand that “we are no longer in the 1970s, ‘80s and ‘90s,” she said. “We need to meet teens where they are at,” and that place is one of “doubt and questioning.”

Among educators, the current thought is to “put it all on the table, the real drama, the real conflict that exists now and has existed for the last 74 years, so that we aren’t blindsiding anyone,” Lipinsky said.

Taking this approach is a corrective, Hurowitz explained.

“We were raised ‘rah-rah Israel.’ We raised our kids ‘rah-rah Israel,’ and then it became very abundantly clear that it's challenging and not everything is perfect — and you can love a country without loving every single thing their government does — but we didn't necessarily give our kids that much nuance,” she said. “We have unfortunately done a generation of kids a real disservice by not having more open conversations with them about Israel.”

A step forward for older adults means being less adversarial when it comes to Israel and the Palestinians, Hurowitz explained.

“We, as parents, can't be like a bull in a china shop and be like, ‘You're wrong. Israel's right.’ It's just not productive. Our kids don't want to hear it. It's not going to change their mind, and all it’s going to do is damage our relationship with them,” Hurowitz said. “We need to show our children that we're empathetic to the Palestinian people who are suffering.”

People feel passionate about the topic but it’s important to remember that especially when the country is in conflict, there are ideal ways to engage. If someone feels compelled to speak, Hurowitz suggests using direct messages or dialoguing privately.

“Social media is too fast to make an impression,” she said.

Quieter periods are a good time to educate younger audiences about the Jewish state, she said.

“The values in Israel are very tied into progressive values here: sustainability, environmentalism, LGBTQ rights, the whole concept of coexistence. These are all things that resonate with the next generation, but they don't know because we don't talk about Israel in those ways.” 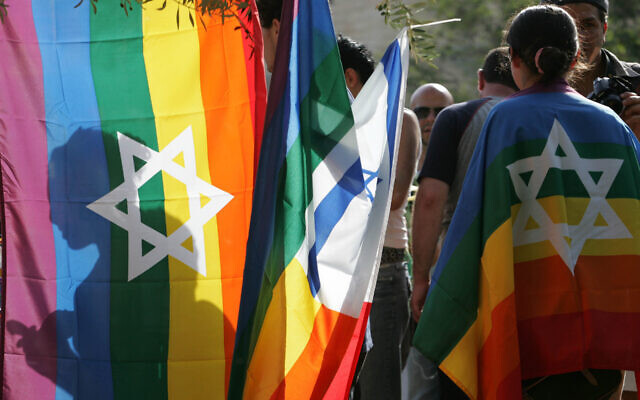 Danielle Kranjec has worked with older teens and people in their early 20s for more than a decade. She said that by the time young adults reach college, many of them express anxiety and fear about talking about Israel. They feel as though they’re “going to be put to some litmus test.”

In her role as director of campus initiatives at the Shalom Hartman Institute in North America, Kranjec recently studied with 43 students from more than 30 institutions. The group discussed the complexities of Jewish power, vulnerability, loyalty and solidarity, but one of the primary goals, Kranjec said, was to “investigate the term ‘Zionism.’”

Seeing the words “Zionism” or “Israel” can be alienating for some young people, she said.

“It's hard for them to come into a conversation because they have this feeling that they're meant to already have a fully formed opinion,” she said. And the fact that college students think they need to have concrete understandings of Israel and Palestine in order to comment on the topic “just is wild to think about. These are complicated issues that adults are working on and don't have formed opinions on.”

Kranjec’s work with the Shalom Hartman Institute is often geared toward helping students ease anxiety, learn values about Israel and reach a more nuanced understanding of the conflict.

“In many cases, I would say what we're trying to do is to create a situation where students can learn without feeling that pressure, without feeling that they have to come to a conclusion, and to create a space where they can say, ‘My feelings about this, or my ideas about this, are changing, are evolving.’ Where they're open to the possibility of learning something new, of not being stuck in one particular set of ideas, or feel that they have to pick a side,” she said.

After so many years of social media usage and exposure to messaging and concepts without appropriate conversational venues, getting students to appreciate subtlety is not only challenging but obligatory, she explained: “I see Israel's role as essential to our sense of who we are as a people, and to not be able to grapple with that is to miss an essential part of Jewishness.”

Ebin agreed, saying, “Israel is part and parcel of the Jewish people — the land of Israel, now the state of Israel — and we need to strengthen that diaspora connection, and that’s not necessarily easy to do these days.”

Providing teens with education and safe spaces for values-based conversations can provide a framework for considering Israel and the Palestinians not only now but when these same individuals reach college and hear claims of occupation or apartheid and potentially question the veracity of earlier teachings, Ebin said.

There are going to be plenty of teens and college students who have negative views toward the Jewish state, and that’s all right, Ebin continued. As educators and parents, the goal is simply to help young adults “be in relationship with Israel. Because when you have some relationship with Israel there is room for growth, and exploration, and maintaining our tradition of connecting to Israel for thousands of years. What worries me most is apathy and indifference.”

Lipinsky agreed, saying, “If you’re still talking, then you still care. If you stop talking about it, then Israel is no longer at the table.” PJC