Hannah Lebovits is logged off Twitter to heal. Since 2017, the former Squirrel Hill resident has used the platform to educate, question and occasionally provoke others on topics ranging from feminism and Orthodox Judaism to communal structures and safe housing. More than 16,000 people look to Lebovits for hot takes and insights.

Lebovits said she’s enjoyed her absence from the social network but plans on logging on again soon; various professional responsibilities will require her to return to tweeting as early as next week.

As an advocate, professor, Hassid and mother, Twitter provides an outlet and means of connecting, Lebovits said, but there are also burdens associated with tweeting and publicly opining on issues regarding education in the Orthodox world, aspects of family purity and society’s regard for homelessness.

Lebovits credits the late Rabbi Adin Steinsaltz — and his 1977 book, “The Strife of the Spirit” — with teaching her that comfort isn't ideal and can actually impede personal and communal growth.

As an assistant professor of public affairs and urban planning at the University of Texas at Arlington, her research focuses on community development, how homelessness is a “defining” feature of communities, and how women, LGBTQ Jews and Jews of color function within modern Jewish communities.

Living and exploring the tensions of Orthodox Judaism often generates pushback, she said, but even so, she continues.

Doing so is uncomfortable at times but necessary, she continued: “I certainly think that I am exposed to many more mainstream practices as an Orthodox Jewish woman today than my mother was exposed to 40 or 50 years ago because there's been a lot of people who have said, ‘We really need to talk about this and we need to work on this.’” 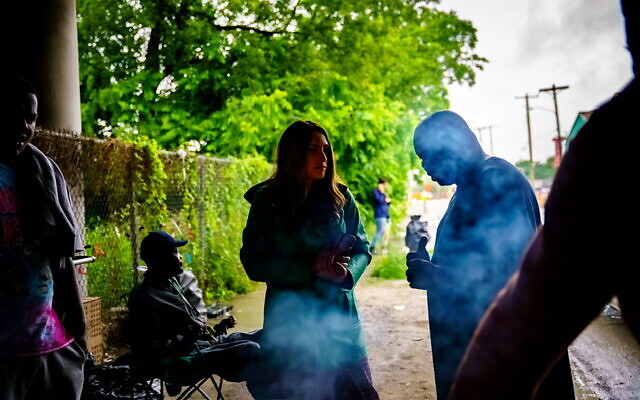 Lebovits shares her ideas on Twitter, in publications including The Forward and Cleveland Scene, and in her classroom. Her understanding of community is based on qualitative research, she said, but also her lived experience. She grew up on Hobart Street in Squirrel Hill to parents who worked “very full-time jobs.” Despite their demanding schedules, however, they made sure to be around at specific points of the day. The family also relied on caregivers to help with Lebovits and her six siblings.

She said her parents “chose to hire older Black women who they felt were very caring in their nature, uniquely interested in helping raise Jewish children, [women who] valued faith and the importance of faith in people's lives and certain forms of obedience and respect for elders. That sort of normative experience, of being loved by and loving Black women, was the most natural thing to me and has very much shaped my life and my perspective.”

Lebovits dedicated her dissertation to her two caregivers and wrote, “To Esther O. Law and Lula Gittings, the two women who gave me a voice and handed me a pen.”

More than a decade has passed since Lebovits called Squirrel Hill home. She lives in Dallas with her husband and two children, yet remains grateful of her childhood and experiences at Yeshiva Schools and Hillel Academy of Pittsburgh.

Her research and years of living in Manhattan, Brooklyn, Cleveland and Dallas helped her understand Squirrel Hill’s uniqueness, she said.

“Across the United States most Orthodox Jewish communities, at this point, are located in either quasi-suburban neighborhoods within urban boundaries or entirely suburban neighborhoods,” she said. “The way that these neighborhoods are developed and designed is such that local activity is car-based: People get in their car, they go to get their amenities, they get back into their car and they leave.”

Squirrel Hill is different, she continued, not only because it’s a “highly dense urban neighborhood within urban boundaries, but it's also a place where people regularly use public space to engage with each other, to talk to each other, to see each other.”

This gives people a greater sense of accountability, Lebovits explained.

“Part of being honest and being authentic is you have to say, ‘Hey, I'm struggling with this. Is anyone else?’ And when they say, ‘no,’ you have to recognize that it's an individual struggling and you don't really have a right to co-opt community to describe that struggle,” Lebovits said.

Lebovits appreciates that Twitter and other outlets give her space to share, probe and ponder, but she also recognizes that when writing about her involvement with a Jewish burial society or parenting, she enjoys freedoms that aren’t universally held.

“People who are stripped of their ability to describe their own lives, and to talk about themselves as fully embodied humans, experience a deep injustice,” she said. “I think that is so often what happens to Orthodox Jewish women — where every single descriptor of us is occurring via the lens of men.”

Those silencings — whether occurring in rabbinic literature or modern discourse — are problematic. And there’s a certain irony, Lebovits said, about the follow-up to identifying these wrongs: “Four or five tweets down the line — after I start engaging with somebody about a communal issue — there's a, ‘Well why don't you just leave?’”

Lebovits refuses. Because rejection isn’t always the answer, she said.