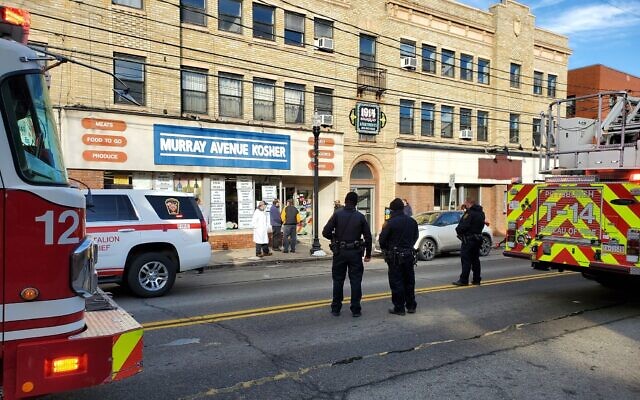 A fire broke out in the storage room below Murray Avenue Kosher on Feb. 24. (Photo by Adam Reinherz)

Firetrucks and police vehicles blocked portions of the 1900 block of Murray Avenue in Squirrel Hill on Feb. 24.

Jerry Hirschfield, battalion chief at Pittsburgh Bureau of Fire, told the Chronicle that a fire began in the storage room below the space occupied by Murray Avenue Kosher at 1916 Murray Avenue.

That storage space is utilized by Murray Avenue Kosher, adjacent businesses and nearby residents.

After noticing smoke, members of the fire department asked Murray Avenue Kosher workers and shoppers to evacuate the building around 8:15 a.m.

“We don’t know anything yet,” said Aryeh Markovic, co-owner of Murray Avenue Kosher. “We can’t go inside. We can’t work.”

Markovic said he was not aware of any injuries or damaged goods inside the store.

Because food is prepared on site, the kosher grocer is unable to reopen until the Allegheny County Health Department completes an inspection, according to Hirschfield.

A spokesperson for the health department said that representatives were en route to inspect the premises at 11 a.m., with the goal of having Murray Avenue Kosher reopen “as soon as possible.” PJC