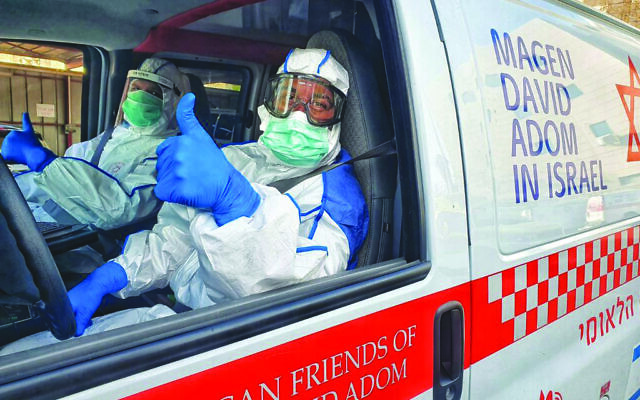 Israel has an increased need for new ambulances necessitated by the COVID-19 pandemic. Photo provided by American Friends of Magen David Adom

A pair of Christian Zionists from Pittsburgh are more than three-quarters of the way toward raising enough money to send a brand new ambulance to serve the citizens of Israel.

Jeff and Arlene Berg, Christians with a love for Israel who live in Wilkins Township, have raised $78,548 of a $100,000 goal for an ambulance for Magen David Adom, Israel’s emergency medical first responders.

“It’s a moral issue when you see lives at stake,” added Jeff Berg.

Jeff and Arlene Berg frequently quote a passage from Genesis, in which God addresses Abram in support of his people’s dedication to Israel: “I will bless those that you bless you and curse those that curse you.”

“God really pinpointed those who cursed Israel,” Jeff Berg said. “We interpret the Bible literally — and if more Christians did that, there wouldn’t be these clashes.”

The Bergs have the blessing — and backing — of their church, Crossroads Ministries, a nondenominational group in Finleyville that was frequented by up to 600 people each weekend before the COVID-19 pandemic. The church has taken part in the Bergs’ fundraising efforts, such as giving out Matchbox ambulances to families from the congregation.

“We have a real compassion and care for our community — we’re here to let people know how much God loves them and how much he does for them,” said Ken Barner, the group’s lead pastor.

Barner said his congregation gives extensively during the holiday season — for everything from ambulances for Israel to feeding needy families in Haiti. They have donated several thousand dollars to the Bergs’ ambulance drive.

“We do a mission every year here at Christmas,” Barner said. “We teach people Christmas is about giving to God more than giving to your family.”

Israel’s arsenal of 1,200 ambulances, 375 of which are mobile intensive care units and about 30 of which are dedicated to serving those with COVID-19, needs to be regularly reinforced and replenished, according to Rob Rosenthal, who works in New York City for American Friends of Magen David Adom. His organization sends about 100 ambulances to Israel via ports in Baltimore every year.

“Because of the hard miles they drive, these ambulances need to be replaced every six to eight years,” he said. “There’s a need — these are not easy miles.”

Rosenthal said it’s not only Jews who are supporting his group’s mission.

“Increasingly, we are getting support from the Christian community and particularly the evangelical community,” Rosenthal said. “It is obviously the birthplace of Judaism and Christianity and our paramedics and EMTs represent the cross-section of Israel.”

Arlene Berg first traveled to Israel in 1974, as part of a tour of Israel, Egypt, Lebanon and Greece. Jeff Berg followed five years later and the two, after meeting in Cleveland, have visited Israel often, most recently about 10 years ago. They continue to be entranced by the place and its people.

The Bergs, though, are mild-mannered about their fundraising efforts. They’re just trying to do a little good in the world, they said.