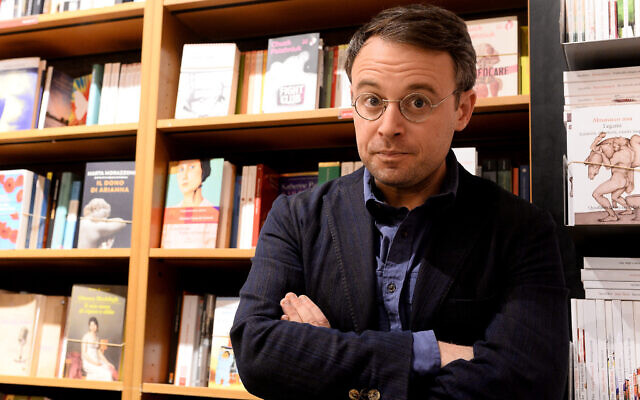 (JTA) — The 2022 Pulitzer Prize in fiction went to “The Netanyahus,” a scathing, satirical novel by Brooklyn writer Joshua Cohen that imagines a visit by the family of the former Israeli prime minister to an American college town in the early 1960s.

“The Netanyahus” was the Chronicle Book Club’s pick for April.

The prize committee called the novel “a mordant, linguistically deft historical novel about the ambiguities of the Jewish-American experience, presenting ideas and disputes as volatile as its tightly-wound plot.”

Cohen, 41, based the novel on a real-life visit by Benzion Netanyahu, a historian and the father of Benjamin Netanyahu, to Cornell University, where the elder Netanyahu served as a professor of Judaic studies from 1971–1975. Cohen said the story of the Netanyahus’ initial visit to the campus was related to him by the late literary critic Harold Bloom.

In the novel, the assimilated Jewish narrator hosts the family and bristles at Benzion’s fiercely nationalist worldview. “I wanted to write something about the identity politics and the campus politics that are around us,” Cohen told Hey Alma, JTA’s sister site. “There’s a lot in Benzion Netanyahu that’s really about the tribalism that happens when these large ethnic or racial collectives collapse — these empires collapse, and they collapse into tribalism.”

Reviews were largely positive for the novel; The Guardian called it “a comic historical fantasia — a dizzying range of bookish learning and worldly knowhow is given rich, resourceful expression.” The novel won the Jewish Book Council’s fiction award for 2021.

But there were detractors. Jewish Currents criticized the novel for being derivative of both Philip Roth and Saul Bellow, and the Jewish Review of Books said that the novel includes “a capsule history of Zionism that is so blatant a distortion that I just gave up.”

“The Netanyahus” is Cohen’s sixth novel.

One of the finalists for the fiction prize was “Monkey Boy,” by Francisco Goldman, based in part on Goldman’s own background as the son of a Jewish father and a Guatemalan Catholic mother. PJC