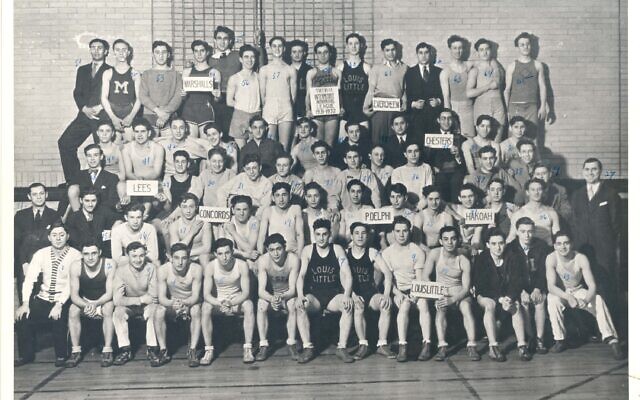 The Jewish Sports Hall of Fame of Western Pennsylvania is back on the field, up at the plate or, more simply, meeting in person. After a two-year pandemic-related hiatus, the group will hold its annual gala live on May 15 at the Jewish Community Center of Greater Pittsburgh.

Alan Mallinger, a board member and group liaison to the JCC, called the Jewish Sports Hall of Fame “an important cause” and is looking forward to bringing the community together after the extended timeout. In 2020, the event was canceled, and in 2021 it was held online.

Since its inception nearly 40 years ago, the Jewish Sports Hall of Fame has raised and distributed more than $700,000 to support Jewish-related sports programs in Pittsburgh and Israel, board member Beth Goldstein said.

Anish, a graduate of the University of Pittsburgh School of Medicine and internal medicine and sports medicine physician, served on the Team USA Medical Staff at the 2011 Pan -American Games in Mexico and the 2012 Olympic Games in England. In college, he was a cross-country and track and field mainstay at the University of Pennsylvania and later competed as a member of Team USA at the 1993 World Maccabiah Games in Israel. He won the Pittsburgh Marathon Masters Division in 2009 and was the first male finisher at 1,600 and 3,000 meters at the USA Track and Field Three Rivers Association Masters Indoor Championships in 2020.

Helmrich, who was born in Pittsburgh, works for the National Football League as director of strategy and business development. His work there took him to 11 Super Bowls and led him to be a two-time winner of the prestigious Commissioner’s Award. Helmrich also was a punter and quarterback at Yale University, helping its team win the 2006 Ivy League Championship.

Levy, a former tennis star at Duquesne University, has spent the past three decades working with 11 professional sports franchises, 11 facilities and 10 sports leagues, including the NBA, MLB, WNBA, NFL, AFL and NHL. In 2016, he was named NBA Development League Team Executive of the Year as senior vice president and CEO of the Canton (now Cleveland) Charge, an NBA G League affiliate of the Cleveland Cavaliers.

Marcus, an education administrator at Slippery Rock University, previously played on the school’s soccer team. Marcus also competed in the 1960 All-American Bowl, was selected to play in the North-South All-Star Game and, in 1961, represented the U.S. in the Maccabiah Games in Israel.

Pakler, an active member of Pittsburgh’s basketball scene, will receive the Ziggy Kahn Award. As an assistant coach at Shady Side Academy, he helped lead the Bulldogs to the WPIAL AAA championship and the PIAA state quarterfinals in the 2021-’22 season. He also served as Pittsburgh Allderdice’s junior varsity basketball coach and assistant coach on the varsity team that won 10 of the past 13 City League boys’ basketball championships. An Allderdice graduate, Pakler coached the JCC’s boys varsity basketball team from 2002-2012, leading the team to four Greater Pittsburgh Independent Basketball League championships, including a three-peat.

Peduto, Pittsburgh’s mayor from 2014-2022, will receive the Manny Gold Humanitarian Award. Among his contributions, Peduto created a playbook for dealing with mass shootings and has helped survivors, fellow mayors and communities recover in the aftermath of horrific events.

Additionally, 22 student-athletes will receive the Nathan H. Kaufmann Scholastic Award during the May 15 banquet.

Recognizing the achievements and contributions of so many students and community members is a reminder that Pittsburgh isn’t only known for its teams, but as a place filled with wonderful people, said Goldstein, whose late father (Bob Goldstein) and uncle (Shelly Goldstein) served the Jewish Sports Hall of Fame for years.

Following in their footsteps and championing youth sports in Pittsburgh and Israel is especially meaningful, she said. “It gives me a lot of pride.” PJC