Eight years after joining Hillel JUC as its senior Jewish educator, Danielle Kranjec is moving on from Oakland. Effective March 1, she will be the director of campus initiatives for Shalom Hartman Institute of North America, overseeing the implementation of programming intended to strengthen Jewish peoplehood, identity and pluralism.

During her time at Hillel JUC, Kranjec, 41, has introduced hundreds of students to formal Jewish life and a corpus of Jewish teachings.

“There's something very satisfying in taking everything I've learned and being able to give back in a way that goes beyond our local campuses,” said Kranjec.

She has learned a lot while meeting the shifting needs of two generations of college students in Pittsburgh — eight years ago brought Facebook-first millennials; these days, engagement with members of Gen Z is achieved primarily through Instagram. Now there will be new challenges. “I feel like we're so blessed in Pittsburgh because things are not highly politicized on campus with regard to Israel, but on other campuses we're seeing where any Israel conversation [occurs] it’s framed through a political lens,” she said.

Such a framework isn’t necessarily “the Jewish way to approach the question,” continued Kranjec. “If we're talking about the deep connections and heritage of the Jewish people to the land of Israel, that's a very different conversation than politics or BDS. So, giving Jewish students a language and a world of ideas that is separate from that, but is connected to their heritage, is such an opportunity to strengthen them and to strengthen their feelings of connection to the global Jewish people.”

In joining the Shalom Hartman Institute, Kranjec will oversee the organization’s efforts on North American campuses.

“We are thrilled to have Danielle Kranjec join the Shalom Hartman Institute to lead our work on college campuses. She brings with her a deep understanding of the campus environment, a well-earned reputation as a stellar teacher, and trusted connections to Hillel colleagues,” said Rabbi Justus Baird, Hartman’s Senior Vice President, National Programs, in an email. “This position will give Hillel professionals and top college students across North America a chance to benefit from Danielle’s commitment to Israel education.”

Kranjec is excited, she said, to share Hartman’s resources and mission with a diverse audience.

“As a patrilineal Jew, who was raised Christian, I wasn’t sure I would fit in at Hillel,” said Brodie. “But while I was there, Danielle made sure everyone fit in and that it was a pluralistic space.”

Pitt junior Dionna Dash called Kranjec “such an influential person” who’s been an “educator and friend to hundreds.” 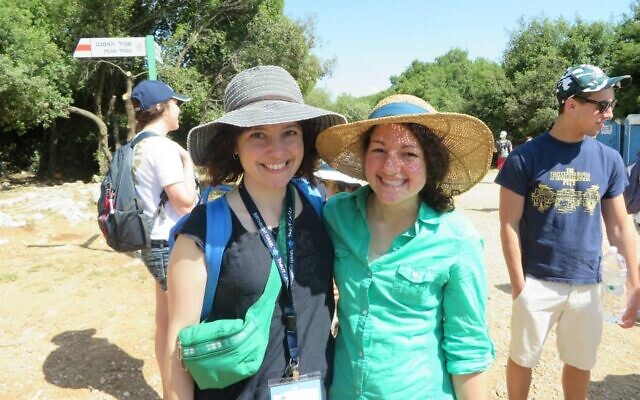 Kranjec gained national attention through her eponymous Kranjec Test, which recommends that study source sheets with more than two sources should include at least one non-male identified voice. That practice, as well as Kranjec’s incorporation of female voices into Torah portions and ensuring that underrepresented thought is given its due, are nurturing and inviting ways to learn, said Leah Berman-Kress, a senior at Chatham University and president of its Jewish Students Association.

Those qualities will make it hard for Hillel JUC to say goodbye to Kranjec, but Hartman is fortunate to have her, said Dan Marcus, Hillel JUC’s CEO.

“Danielle has transformed the way that Hillel JUC approaches and understands how to build authentic relationships with students and inspire them to engage with Jewish learning,” he said.

“Everyone at Hillel JUC is so appreciative and honored to have had Danielle as our senior Jewish educator and knows she will continue to be a part of the Hillel JUC family.”

Although the Shalom Hartman Institute is located in Israel, Kranjec will stay in Squirrel Hill. She expects to travel to the Jewish state and campuses across North America as part of her duties, but said COVID-19 will dictate when that begins.

Being based in Pittsburgh will allow her to partner with Hillel JUC on future Hartman programs.

“I'm just so grateful for the Pittsburgh Jewish community, and all of the time and resources that have been invested in me and in my work over the years,” Kranjec said. “The support of the donors, the support of our board of directors — it's really a testament to all of the support and experiences that I've had these past years that I've been able to accomplish this big promotion and next step in my career.” PJC