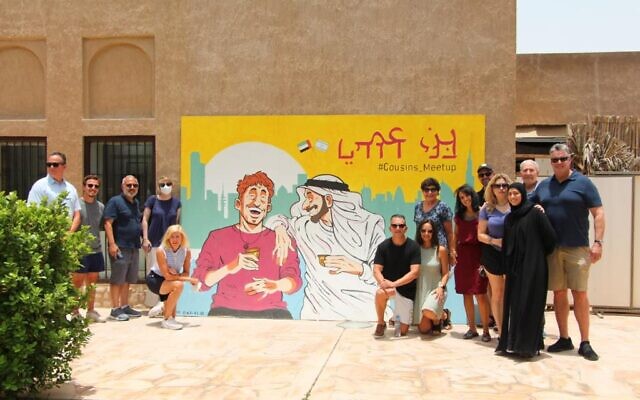 Federation mission members pose with their tour guide before the “Cousins” painting in Dubai. Photo provided b Erica Zimmerman.

The leadership of the United Arab Emirates has operated under a simple, overused axiom: If you build it, they will come.

The saying has proven true for many of the government’s expansive efforts, including a palm tree- shaped island, the world’s tallest building, an indoor ski resort in a desert country, and, since the Abraham Accords, a revived Jewish community.

Following the Jewish Federation of Greater Pittsburgh’s Mega Mission to Israel, a group of about 20 Mission attendees traveled June 22-26 from Jerusalem to the UAE.

“We wanted to go to the UAE to connect with the growing and burgeoning Dubai Jewish community,” said Brian Eglash, the Federation’s senior vice president and chief development officer. “It was fascinating to go to an Arab or Muslim country and see a growing, thriving Jewish community.”

Officially, there are between 2,500-3,000 people who self-identify as Jews in the UAE, but there could be thousands more who don’t admit to being Jewish. In fact, Jews have lived in the area for a long time but many only began to feel comfortable identifying as such since the Abraham Accords and the softening of relations with Israel.

Despite the tension, the community is growing and creating infrastructure.

“We connected with three different congregations while we were there,” Federation President and CEO Jeff Finkelstein said, offering the oft-repeated Jewish punchline, “You can’t have one, you have to have three.”

Shabbat dinner was shared with two Emiratis who had ties to the government, Eglash said.

“We were there with the chair of the Jewish community, a native of Johannesburg,” Finkelstein said. “They’re all working together to build bridges between the Emiratis and the Jewish community and Israel. It’s great to see them working on the ground — slowly, deliberately. It will take time, but they’re committed to it.”

David Silverman participated in the trip with his wife, Erica Zimmerman. He said they were impressed with both the itinerary and the accommodations, as well as how welcoming they found the country.

“We didn’t see anyone potentially antisemitic, from the hotel staff to around town, to the way they helped rabbis set up synagogues,” Silverman said. “It’s really very safe and very welcoming.”

One highlight of the tour, he said, was visiting the Crossroads of Civilization Museum, which provides a history of Dubai’s role as a trading connection from the East to the West. 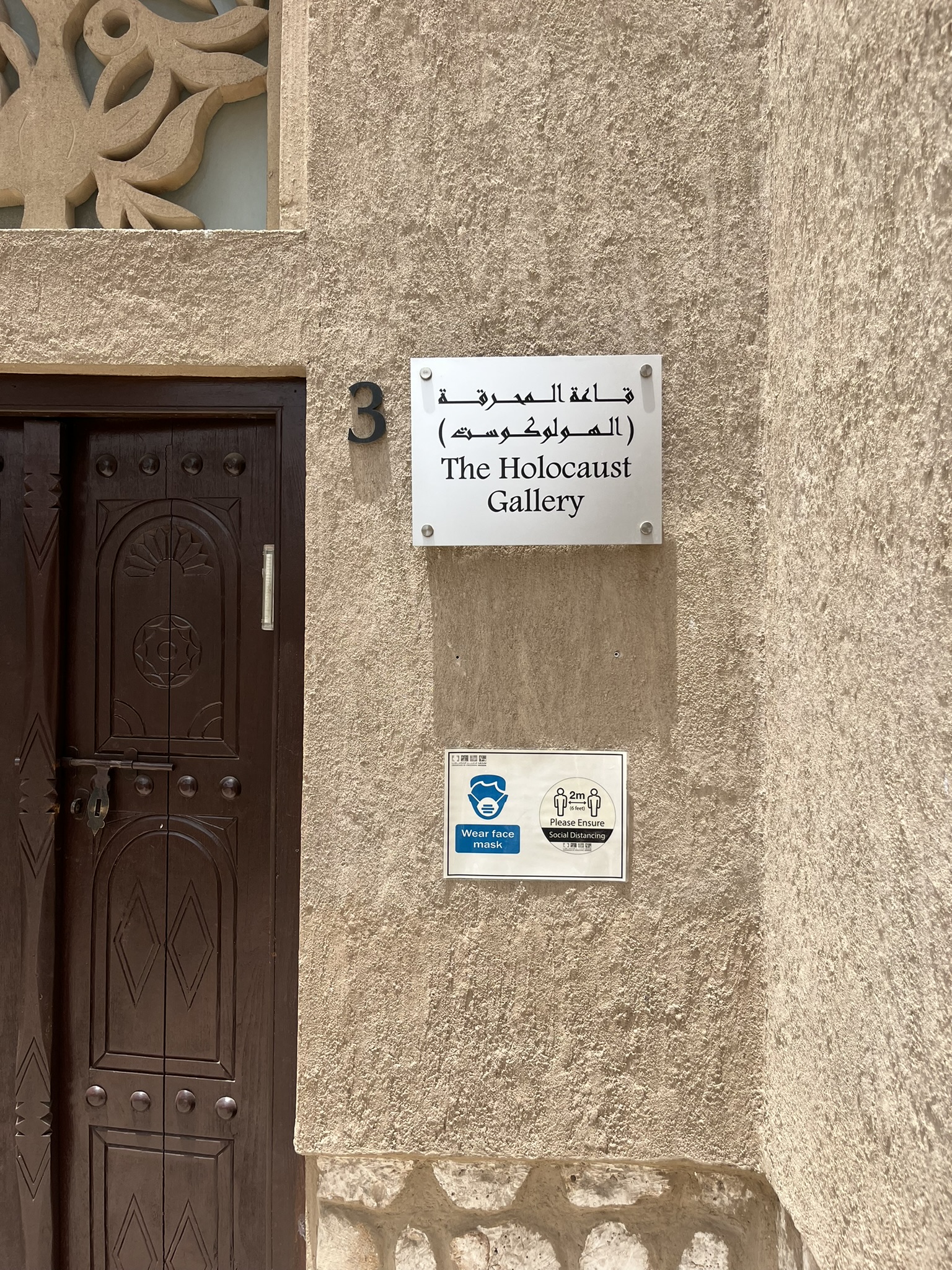 Entrance to the Holocaust Gallery at the Crossroads of Civilization Museum. Photo by Stacey Seewald.

“Within the museum, there was a Holocaust section,” he said. “It was really well done, obviously on a smaller scale than Yad Vashem, but the fact that the museum had a section to let people know what happened in the Holocaust was very nice and kind of surprising.”

“I don’t think you’d find a section like that in any other Arab museum,” Zimmerman added.

Zimmerman was particularly impressed by a painting outside the museum called “Cousins Meetup.” Painted by both an Arab and Israeli artist, the work shows an Emirati in traditional garb and an Israeli sharing a cup of coffee in front of the Dubai skyline. Between the two are the flags of Israel and UAE, each next to the other figure.

“It’s really a telltale sign,” Zimmerman said. “If there’s ever going to be a real community, that is a sign of getting along. That was so pointed.” 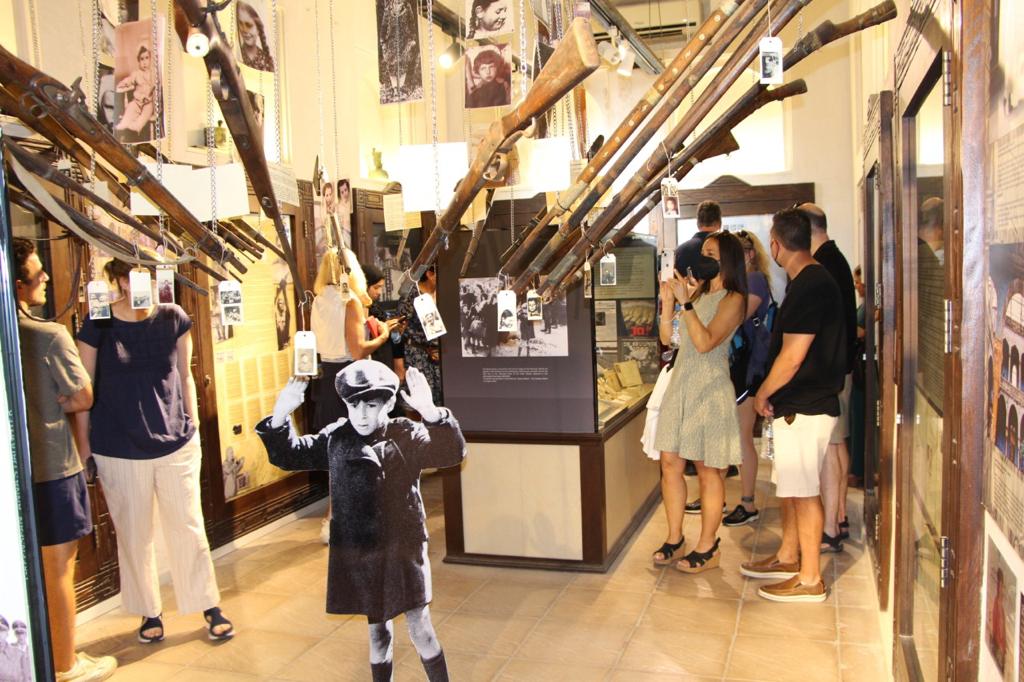 Stacey Seewald and her husband, Scott, traveled from Israel to the UAE as well. She was impressed with not only the community, but the commitment by the country to support its Jews.

“It seems like the UAE and the sheiks that are in control of the region are very forward thinking and it seems like they believe in the motto, ‘If you dream it, you can do it,’” she said. “It’s a very ‘go big or go home’ place.”

Her husband called the country “impressive,” pointing to its advances in technology, architecture and business. At the same time, he said, there is still work to be done.

“It’s not a perfect place,” Scott Sewald said. “Twelve percent of the population are Emiratis and the remaining 88% are expats and there’s a clear difference between the two, but at least it was a society based heavily on tolerance and respect for one another.”

The UAE’s government has gone all in since the signing of the Abraham Accords to support the Jewish community, Scott Sewald added, noting the kosher restaurants, a hotel-based synagogue and a mikvah.

The Dubai trip demonstrated Federation’s history as a trailblazer, Finkelstein said, recalling the organization’s visit to Morocco several years ago — before there were direct flights between Israel and the country. He’s looking forward to continuing to visit Jewish communities wherever they are, he said.

“Whether it’s Israel or the UAE or Morocco, wherever we go in the world and see these places, there’s no better way to do it than with Federation and its missions,” he said, “because the way you can engage with communities, you would never have that access if you went on your own.” PJC