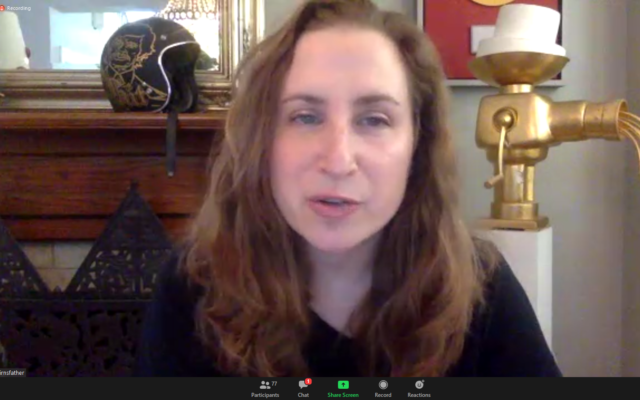 Lauren Bairnsfather discusses the history and mission of the Holocaust Center of Pittsburgh. Screenshot by Adam Reinherz

Representatives of the Holocaust Center of Pittsburgh were among more than 12,000 educators and students to participate in “Advancing Social Justice: A Call to Action,” a July 28-30 online forum hosted by the University of Pittsburgh’s Office of Diversity and Inclusion.

During the 75-minute presentation, “Connecting History with the Injustices of Today: Insights from the Holocaust Center of Pittsburgh,” Lauren Bairnsfather, Marcel Walker and Jackie Reese described the Holocaust Center’s history as well as its efforts to curb racism, anti-Semitism and other manifestations of hate.

The Holocaust Center was established 40 years ago by survivors and their children, and although the organization’s initial focus was largely related to the Jewish experience, there has been a push in recent years to focus on both the “long history of anti-Semitism” and the persecution of others, explained Bairnsfather, director of the Holocaust Center: “If we take all of our work back to our understanding of the Holocaust, we understand that hatred for one minority often translates into hatred for many minorities.”

Accordingly, the organization is responding to racism and anti-Black police violence by entering schools, teaching students about advocacy and introducing educators to new pedagogies.

“We are committed to being anti-racist, and we will do that,” Bairnsfather said. “And we are committed, just as committed, no more, no less, to fighting anti-Semitism wherever we see it. That is who we are and who we will always be.”

One of the organization’s major educational tools is its “Chutz-Pow!” series, a four-part comic book-style work on local upstanders, international heroes, young people and women. 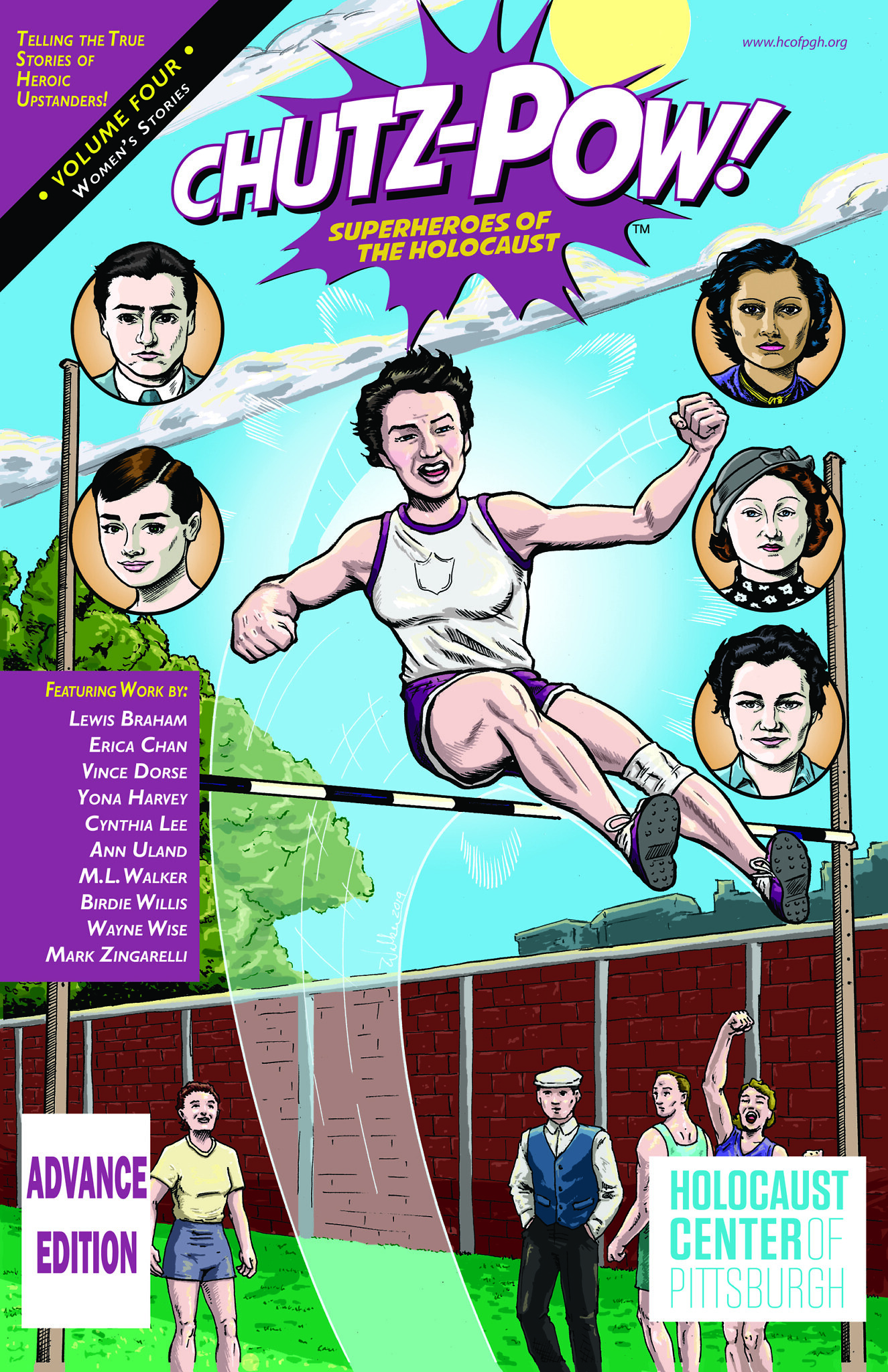 Sharing these narratives has afforded a unique opportunity to teach history and also has enabled personal discussions about race, explained Marcel Walker, the lead artist and project coordinator of “Chutz-Pow!”

“I have been asked very directly, what it is like as a Black person to work on ‘Chutz-Pow!,’” said Walker. “I am not Jewish. I have always said that I am from a culture that is adjacent to the Jewish culture, and my expanded role with ‘Chutz-Pow!’ has allowed me to see all the areas of intersection, but also the areas of difference, and where there are parallels. But my role has also allowed me to connect with audiences in ways that I hadn't necessarily foreseen.”

Walker recalled one experience teaching Black students about the project and the “powerful feeling” that connection provided.

“These students are young and Black, and I wanted them to know that somebody like me could be so invested in another culture and in bringing these stories to light and showing these intersections and parallels,” Walker said.

It is also critical for the Holocaust Center to note that while similarities exist between the Black and Jewish communities, there is a danger in “drawing false parallels,” said Reese, the organization’s marketing and education associate. 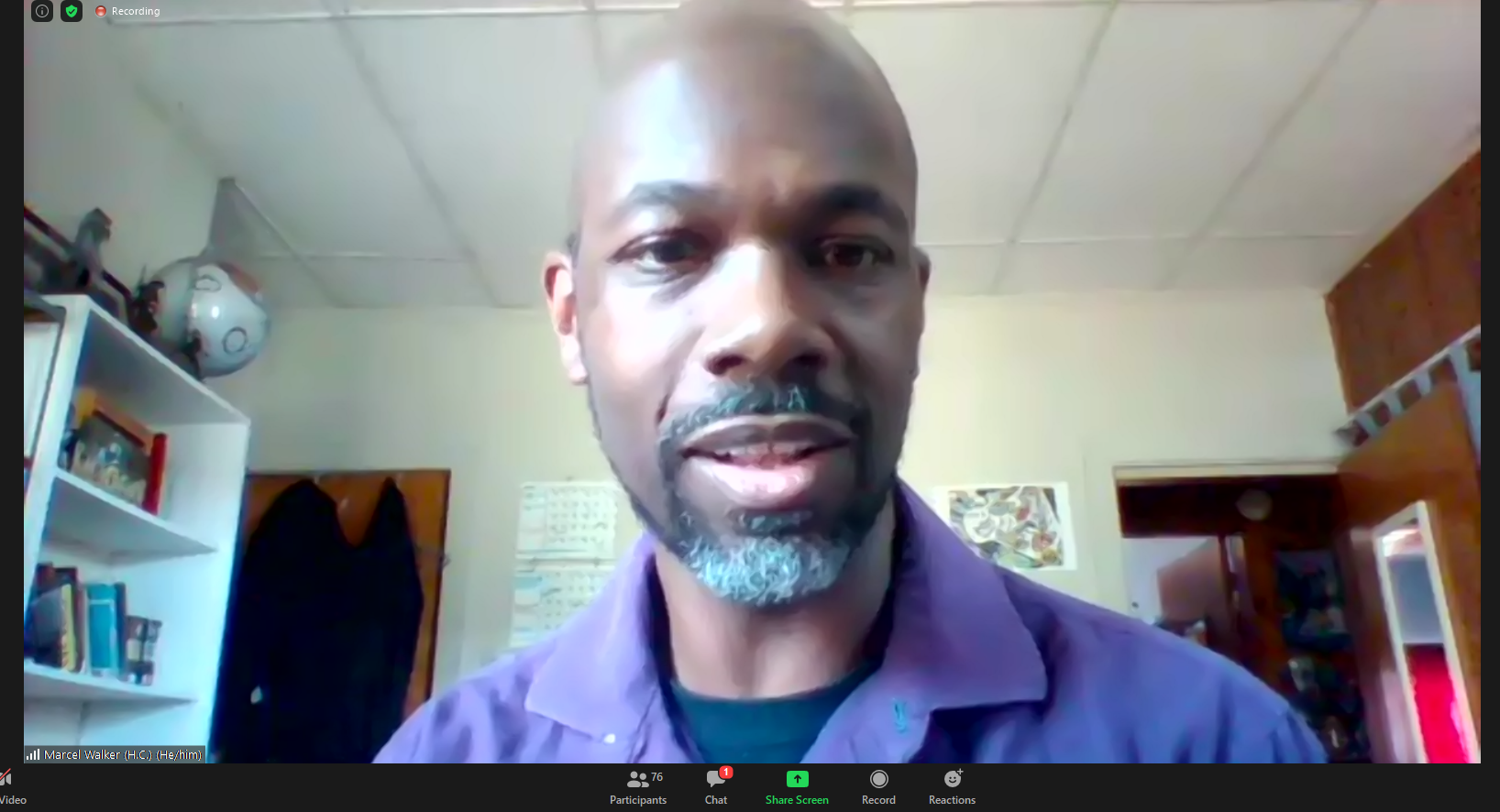 Marcel Walker describes his experiences with the “Chutz-Pow!” series. Screenshot by Adam Reinherz

Both communities have faced centuries of discrimination and experienced generational trauma, but “we cannot draw false equivalences,” continued Reese. “It's tempting to make connections, and in order to inspire critical thinking we should. However, we can't oversimplify and we can't compare pain. This is a really big principle for us, not comparing pain of groups.”

While both camps have experienced considerable hurt, moving forward there must be a renewed commitment to eradicating intercommunal aggression and other barriers for progress.

“What anti-Semitism looks like needs to be taught so that those who would theoretically be allies can recognize when they are allowing it to creep into their rhetoric,” said Reese. “Likewise, Jews need to not be complacent or allowed to use anti-Semitism as a pass for doing the work to take an anti-racist stance. We can't allow our fear of the persecution being turned on us to keep us from fighting for what is right.”

Along with representatives from the Holocaust Center, the forum welcomed other notable speakers, including Ibram X. Kendi, author of the 2019 book “How to Be an Antiracist,” and was an opportunity to draw a global audience while initiating a year of engagement, explained university leaders in a series of statements.

“This forum will give us the opportunity to examine the tools that we can use to create a more diverse, inclusive and equitable community,” said Kathy Humphrey, senior vice chancellor for engagement and secretary of Pitt’s board of trustees.

Ann E. Cudd, Pitt’s provost and senior vice chancellor, offered similar hopes, and noted, “A focus on engagement is ideal for a university setting because here we learn and teach about communities, while coming together to create new ones.” PJC