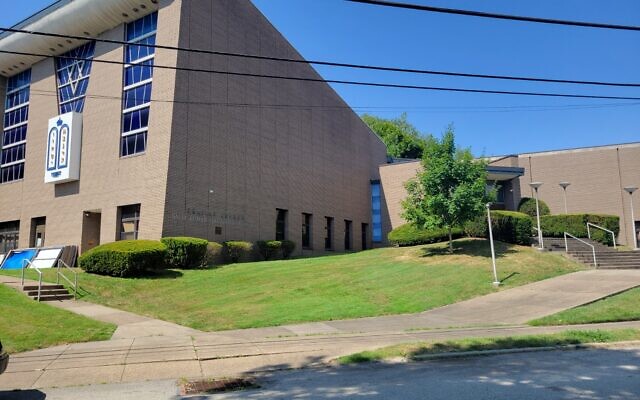 Gemilas Chesed is offering $100,000 to families as an incentive to move to White Oak. Photo by David Rullo.

Guttman and Sunstein are lay leaders of Gemilas Chesed Synagogue. The congregation recently ran a full-page ad in Jewish Action Magazine, a national publication of the Orthodox Union, offering $100,000 over a five-year span for families who move into the Pittsburgh suburb — located approximately 15 miles from the city — and become members of the congregation.

By offering the cash incentive, the congregation is hoping to beat the odds and defeat what seems an inevitability if one looks at the fate of many other synagogues that once thrived in the Mon Valley and Eastern suburbs, according to Sunstein, a former president of Gemilas Chesed.

“We have an aging congregation, and if we don’t do something, sometime in the future we’re going to run out of people,” Sunstein said. “We’ve seen what happened in the whole valley. We have Torahs from Clairton and from Donora — every shul up and down the valley — Uniontown, Charleroi, Duquesne, they’ve all closed down and we don’t want to be the next one.”

Sunstein said the shul currently has about 60 member families. It has tried before to bolster its roster, but those efforts were temporary fixes that attracted transitory families who moved in, then out, of the neighborhood.

Guttman, a board member of Gemilas Chesed, came up with the idea of offering people money to move into the community.
“Why would people come here instead of Squirrel Hill or Greenfield?” Guttman asked. “Affordability.”

When families commit to moving to White Oak, the congregation will give them $30,000, the first installment of the $100,000. Guttman said that money will basically provide the entire down payment on any house in the borough.

A monthly stipend of $1,250 is given to each family that participates in minyan daily and spends one hour each day learning at the shul. 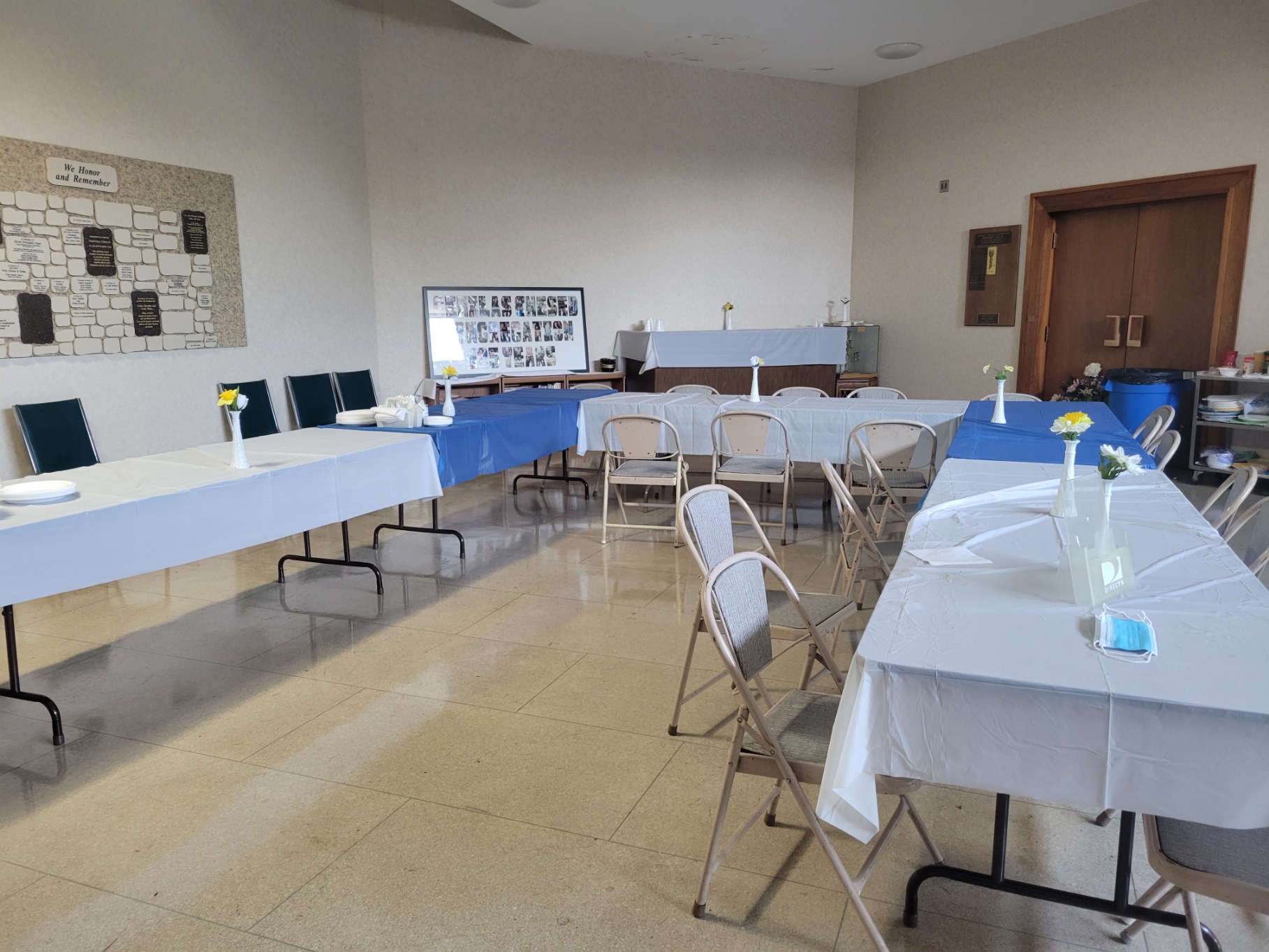 “That will basically cover the entire mortgage payment,” Guttman said. “Come help us out, we’ll have shul, minyan, learning, sustainability.”

The congregation is asking for a five-year commitment from families moving to the neighborhood, he said, adding that Gemilas Chesed is able to finance this initiative because it owns its building, doesn’t have any outstanding debt or large bills, has a generous membership base and an endowment.

The effort is already beginning to pay off, Guttman said.

One family is closing on a house Aug. 1, and another family is scheduled to close on a home the second week of August.

“We just hosted a couple last Shabbos and I’m in contact with somebody else who emailed me this morning,” Guttman said. “We’ve been talking since last week. He’s going to be coming out in the next couple of weeks. There has been a lot of positive return.

“No one wants to be the first,” Guttman continued, “but now we have a first and we have a second and people are saying, ‘OK, maybe’s there possibility here.’”

The congregation’s initial goal is to have six new families move into the community, he said, and it’s willing to extend the offer to at least a dozen families.

Gemilas Chesed Synagogue has been in White Oak since 1963, when it moved from McKeesport, where it had been located since 1886. In fact, the current building features many items — a Torah ark and seating, for example — that were in the McKeesport synagogue. 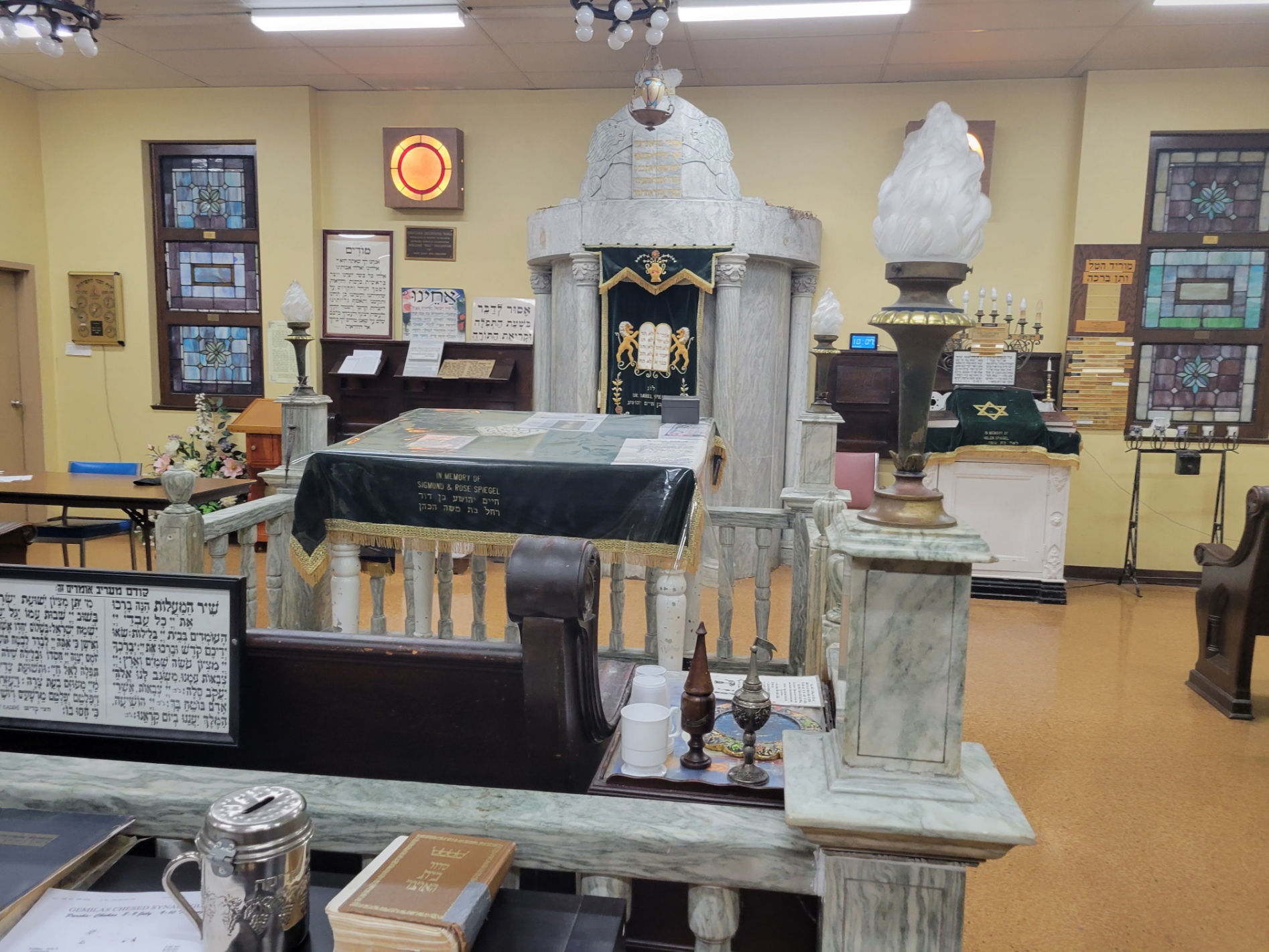 Gemilas Chesed took pieces of its original McKeesport synagogue with them when they moved to White Oak. Photo by David Rullo.

Because of its long history in the borough, an infrastructure already exists for Jewish life. There is a mikvah located near the shul and an eruv wraps through most of the community.

As for a kosher options, Guttman noted that Murray Avenue Kosher is only 20 minutes away in Pittsburgh and will deliver, and there is a Costco nearby that features a large selection of kosher foods.

The neighborhood is part of the McKeesport Area School District, but Guttman said those moving into the community will most likely be sending their kids to Yeshiva Schools, a 20-minute ride away for which transportation will be provided.

The congregation currently has minyans on Thursday and Shabbat, as well as any day someone is observing a yahrzeit. Its leadership plans to reconstitute a daily minyan once a few more families move to White Oak.

And while the shul has been without a full-time rabbi for the last two years, the congregation is actively seeking to fill the position.

Despite the vacancy, Gemilas Chesed has been hosting a full calendar of events including a Lag B’Omer barbecue at White Oak Park, a pre-Pesach meal, Shavuot lunch, Chanukah banquet and more.

“We always have something going on,” Guttman said. 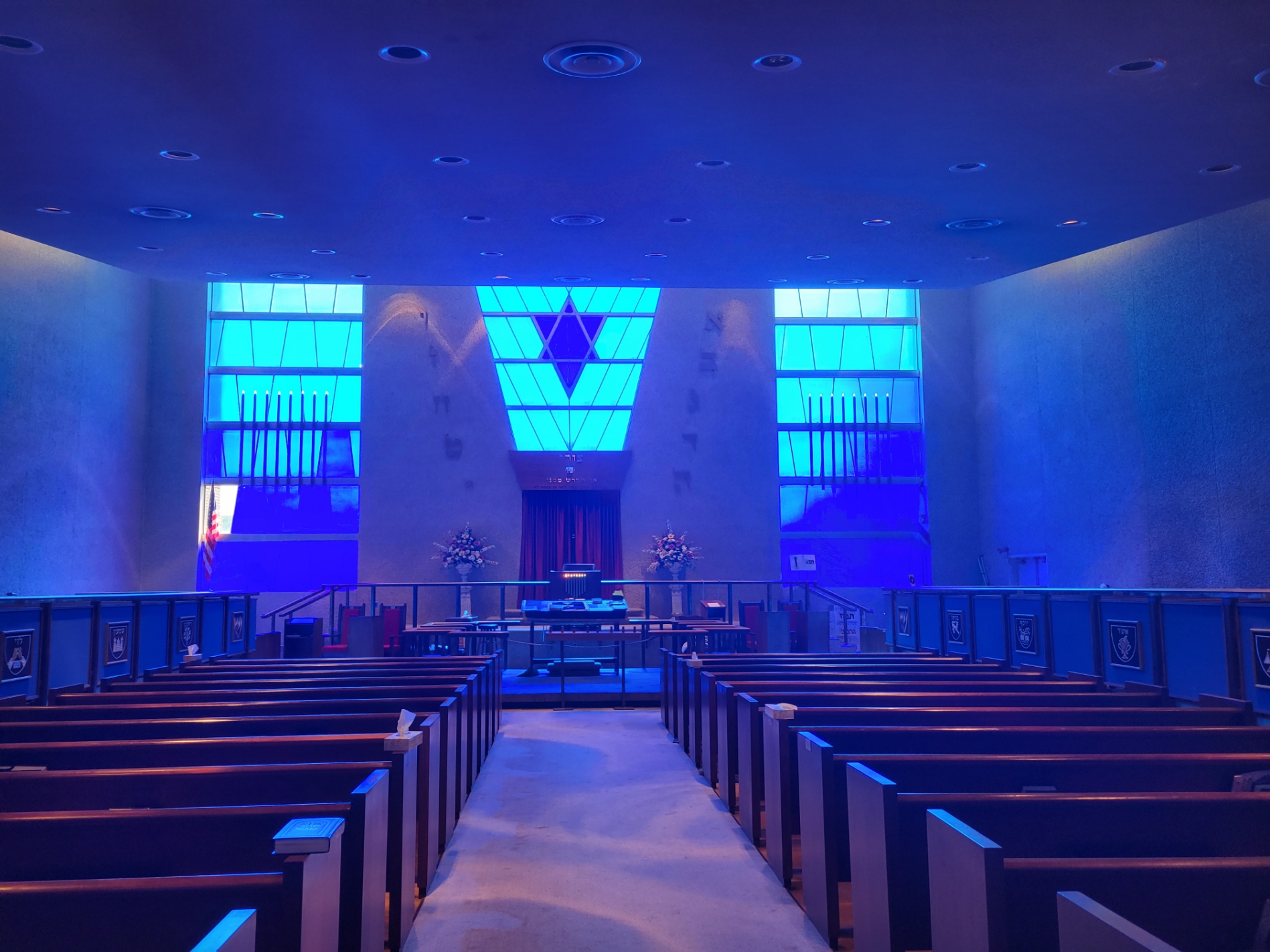 Gemilas Chesed hopes their synagogue will soon be filled for daily minyans. Photo by David Rullo.

While people might initially be attracted to White Oak based on the $100,000 incentive, Sunstein said, once there, families will find a vibrant congregation and a multigenerational community that resembles a Norman Rockwell painting.

“You walk home Friday night, it’s dark but it’s safe,” he said. “Everybody knows you. They say ‘hi,’ there are literally people offering you ‘good Shabbos’ or ‘happy holiday.’ We’re kind of stuck in the ‘50s.”