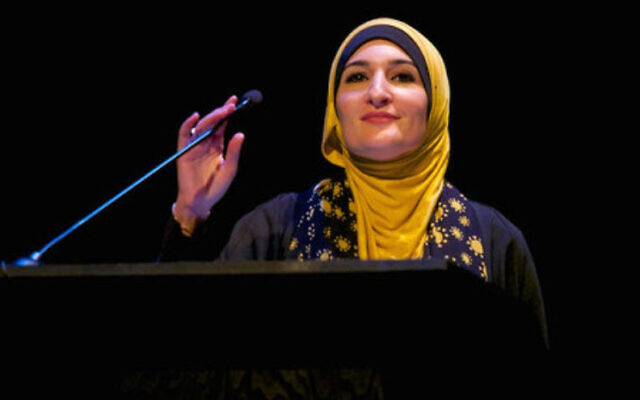 The Geico insurance company on Thursday canceled a company event with Linda Sarsour, a prominent pro-Palestinian activist who has been widely accused of antisemitism, after backlash from Jewish groups.

“We apologize to our employees, customers, and others for our initial plan to invite Linda Sarsour to speak at our internal event,” Geico said in a statement.

“Geico does not condone hatred of any kind, and we do not stand for or with anyone who does,” the statement said.

Sarsour had been invited to speak at an internal company diversity event celebrating Middle Eastern and North African Heritage Month.

Geico said it had canceled her appearance shortly after announcing it on Tuesday, but did not publicly announce the cancellation until Wednesday

Jewish groups including the Anti-Defamation League had blasted Geico for its plan to host Sarsour at the event.

“Shocked a company like Geico is reportedly partnering with Linda Sarsour, a person who peddles in antisemitic tropes while slandering and delegitimizing Israel,” said Jonathan Greenblatt, head of the ADL.

The American Jewish Committee said Sarsour’s “extensive record of trafficking in incendiary, antisemitic comments about the Jewish people and Israel makes her utterly unfit to be the face of Geico’s ‘diversity and inclusion’ campaign.”

Geico is the second-largest auto insurer in the US, after State Farm, and is based in Maryland.

Sarsour is an activist from New York who has repeatedly drawn fire from Jewish groups and Israel advocates over the years, including for her support for the Boycott, Divestment and Sanctions (BDS) movement against Israel and for statements seen as crossing the line into antisemitism.

In 2020, the Biden presidential campaign disavowed Sarsour after she appeared at an online meeting of Muslims who were supporting Biden’s candidacy.

She compared Zionism to “white supremacy in America” in 2019 before walking back the comment, has said that progressive Zionists have no place in the larger progressive movement and that Israel supporters cannot be feminists.

She has said she supports a one-state solution that would create a shared country for Jews and Palestinians — a solution that many Jews consider a formula for the demise of Israel. In 2012, she tweeted “Nothing is creepier than Zionism,” and has spoken in favor of Palestinian terrorist Rasmea Odeh.

Far-left groups including Jewish Voice for Peace, and liberal politicians, support Sarsour for her community and progressive activism and for rallying behind Muslim causes. She was recognized by former U.S. president Barack Obama, whose White House named her a “champion of change.” She was one of the leaders of the massive Women’s March movement after Donald Trump’s presidential election win, until the group’s leadership fell apart amid accusations of antisemitism by other members. PJC