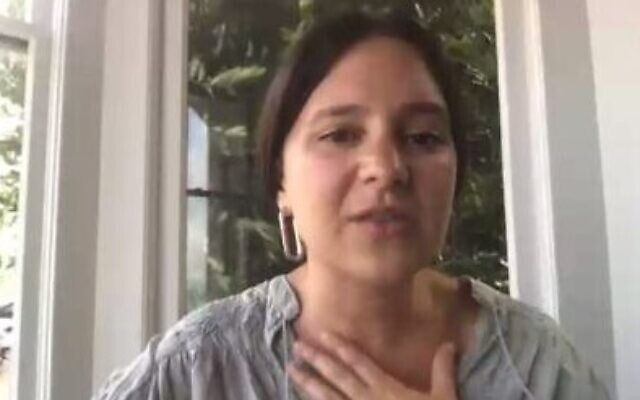 On July 14, Bari Weiss sparked an uproar when she suddenly resigned from her position as op-ed editor and columnist at The New York Times with a blistering open letter published on her website. In it, she cited harassment about the frequency with which she wrote about Jewish topics, as well as being called a “Nazi and a racist” by her colleagues.

The acclaimed author of “How to Fight Anti-Semitism” headlined Montreal’s online Federation CJA Community Recovery and Resilience Campaign on Thursday, where she discussed the Jewish people’s strength amid COVID-19 and the uptick of North American anti-Semitism.

Addressing about 500 Zoom attendees from her home in San Francisco, Weiss began by recognizing “this very raw and uncertain moment [the COVID-19 health crisis] that we’re living through” and its global financial and emotional repercussions.

“Millions of people are out of jobs, there is tremendous social unrest in our cities, tribalism, hatred and discrimination are in evidence everywhere we look, and yet leaders seem very hard to find right now,” Weiss told the viewers.

The United States, Canada and the world are at an inflection point, she said, one with particularly high stakes for the Jewish Diaspora.

That, noted Weiss, is the bad news. The good news, she said, is that “we are members of the Jewish people — the people that have renewed and rebuilt out of the embers, more than any other people in all of human history.”

“Jewish history is more than a remembrance of things past; it’s a moral manual. It’s a lighthouse. It’s a compass. If our ancestors could find their way when they were buffeted in ways we can only imagine, so can we,” Weiss said.

Acknowledging that she is neither a scholar nor rabbi and lacks a “fancy degree,” Weiss, winner of the 2018 Bastiat Prize for her journalism, noted that it doesn’t take a genius to explain Jews’ staying power.

The secret for that endurance, she said, is in Jewish values such as monotheism, freedom, keeping the Sabbath, valuing diverse ideas, and the sanctity of human life. These ideas, she said, have transformed the world.

But ideas can’t win it on their own, she said — they only shine “as brightly as the people who live by them.”

“Without us, [those ideas] fade,” Weiss said. “With us, they are capable of lighting up the world. As we’re living through this historic moment, I just want to remember that Jewish history is always written in the present. It’s not a fait accompli. We are writing our bit now. We will decide how our history is remembered and that is the notion that always gives me hope, even in dark times.”

Weiss has experienced her share of dark times. In addition to death threats from the far-right and white supremacists, she was subjected to anti-Semitism from the political left as a Columbia student and in numerous professional contexts.

“I joke to people, but it’s sort of true. I feel like I have a permanent kippa attached to my head at all times,” she said. “And that comes with gifts and it comes with responsibilities, as anyone who wears their Judaism publicly will tell you.”

She said that being publicly criticized as a Jew has inspired her to reconnect with Judaism.

“I say this a lot: It’s not enough for a Jew to be an anti-anti-Semite. That’s not what we were put on earth to do. We were put on earth to be Jews. The more deeply I connected to my own Judaism, Jewish history, the stronger my conviction has become. I am just extremely clear on who I am, what I’m about, and what I’m fighting for,” she said.

And that, said Weiss, was what made her decide to leave The New York Times.

“I think a lot of people think [my resignation is] nuts, like, why would you give up the prestige of that? For me, it’s extremely clear: I am part of a line of a people that is about values that are way bigger than any fancy platform or title. That’s really what drives me,” she said.

On a global level, Weiss believes the pandemic has intensified anti-Semitism. She cites people’s need for a scapegoat in times of unrest as one of the reasons; increased screen time also further polarizes people politically, in her opinion, and online interactions facilitate people’s dehumanization of others who they never meet face to face.

What’s needed at this moment is to think “Zionistically,” she said, clarifying that she wasn’t just speaking about supporting Israel, but rather thinking creatively and audaciously.

“Think back to the people living in comfortable homes in Budapest who decided in the 1900s and 1910s, ‘We’re going to put on sandals and move to a swamp.’ If they were capable of that kind of radical imagination, so could we be too,” Weiss said. PJC