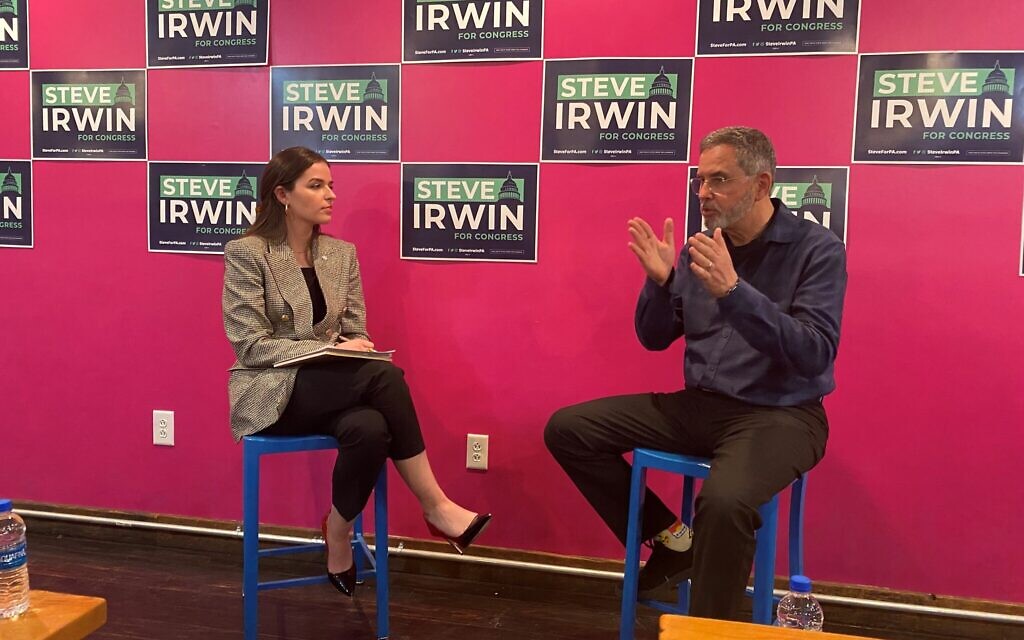 Steve Irwin spoke at a forum organized by the CRC earlier this year. Photo by Jim Busis.

I’ve known Steve Irwin for more than three decades, and I’ve watched him work to find solutions to intractable problems that stand in the way of equality, justice and progress in our communities. Again and again, I’ve seen Steve use creativity, persistence and moral clarity to find ways to help people, and that’s why the 12th District of Pennsylvania needs him in Washington.

The challenges that our newly elected member of Congress will face are not new: drastic inequities, lack of economic opportunity, gun violence, health disparities, a broken justice system, impending environmental calamities, threats to reproductive rights and more. What’s unprecedented is how difficult it is to get anything through Congress to help.

In many ways we are still suffering from the after-effects of the Trump years. Our interactions are sharper, our language is less kind and our objectives have never seemed further apart.

Navigating that landscape will take more than strong ideals and heartfelt positions; this is a time that calls for problem-solvers, who can find a way to make change and get desperately needed help to our communities now.

Steve will fight and vote for progressive causes, but he’s not someone who will just talk the right talk and make the right votes.

I got to work with Steve to advance progressive causes when he was chairman of Americans for Democratic Action, the National Jewish Democratic Council, and when he was executive vice president of the 14th Ward Independent Democratic Club. He promises, and delivers.

Steve has been asked to step up again and again to help put progressive ideals into practice. He chaired the U.S. Civil Rights Commission for Pennsylvania, and he has held leadership positions in Sustainable Pittsburgh, the Jewish Healthcare Foundation and the regional chapter of the Anti-Defamation League. As a member of the Pennsylvania Securities Commission, Steve made himself an expert on protecting Main Street from Wall Street, testifying before Congress in an effort to advocate for tighter regulations.

At every turn I have seen him bring people together to find common ground on challenging, complex issues and turn that consensus into real, tangible action on the issues that matter the most.

Finally, I feel strongly that this community should be represented by a member of Congress that stands firm on Israel’s right to exist.

My legislative district is entirely contained in the congressional district that Steve is seeking. It’s beautiful and diverse, and it includes one of the nation’s last concentrated city Jewish neighborhoods. To many of my constituents, the Holocaust doesn’t feel abstract or distant. That’s because many can trace their family trees through the horrors that took place 80 years ago. But it’s also because we are watchful for antisemitism that is all too present today. It was only three years ago that the deadliest antisemitic attack in the history of our country took the lives of 11 of our friends and neighbors as they worshiped. So far this year, we have seen half a dozen frightening instances of antisemitic messaging targeting this community.

Like many in Pittsburgh’s diverse Jewish community, Steve is clearheaded about the faults of Israel’s democratically elected government, but he does not waiver on the need for this safe haven.

Campaigns are brutal, and anyone can see that efforts of passionate supporters of each of the three candidates have reduced them to caricatures, obscuring the fact that each is smart, decent, hardworking and wants to represent the 12th District in Congress for good reasons.

I believe Steve is the right fit for the job, and I hope that voters will get the opportunity to get to know the kind and tireless champion for progressive causes whom I have known for more than 30 years. Steve is a brilliant, engaged, accordion-playing, dad joke-telling difference-maker. He leads with empathy, and he doesn’t give up.

That’s why I’m proud to support Steve and strongly encourage you to vote for him on May 17. PJC

State Rep. Dan Frankel, a Democrat, represents the 23rd District in the Pennsylvania House of Representatives.