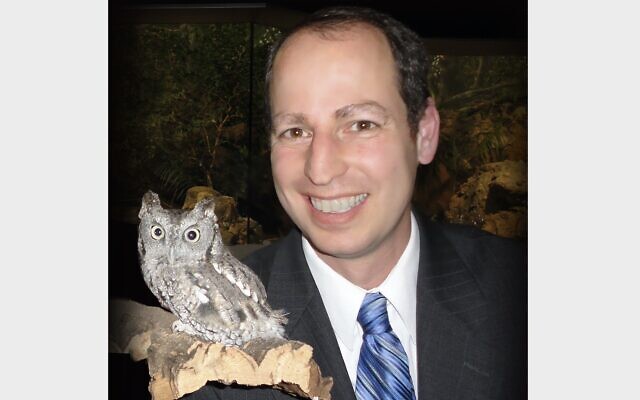 Once, in the middle of a Rosh Hashanah service, a zoo curator entered a synagogue, accompanied by — this is true — an African black-footed penguin suffering an epileptic seizure. No, the curator did not come to pray for the arctic bird’s salvation. Rather, she was looking for guidance from Dr. Jeremy Goodman, at the time the director of the Turtle Back Zoo in West Orange, New Jersey. Also a veterinarian, Goodman instructed the curator to administer Diazepam, a sedative that treats anxiety, muscle spasms and seizures, and presumably the penguin was inscribed in the Book of Life.

The Zoological Society of Pittsburgh’s board of directors announced that it has selected Goodman to serve as the eighth director of the Pittsburgh Zoo & PPG Aquarium. He will succeed Dr. Barbara Baker, who served the zoo for 31 years and announced her retirement in June. The zoo opened in 1898.

Goodman, who assumes his new role Oct. 1, has served as the executive director of the Roger Williams Park Zoo in Providence, Rhode Island, the nation’s third-oldest zoo, since 2013. Before that, Goodman left his mark in the field by turning around the aging Turtle Back Zoo, and serving as assistant director of the Potawatomi Zoo in South Bend, Indiana.

Goodman, who previously worked in a private veterinary practice near the Jersey Shore, holds a bachelor’s degree in animal science from Rutgers University and a doctorate in veterinary medicine from Tufts University.
Just as important as his resume, he told the Chronicle, is his role as a father and a Jew. And he is happy to make Pittsburgh his new home.

“The Pittsburgh Zoo is certainly one of the top 10 in the country and it’s a really great opportunity, from a professional standpoint. From a personal perspective, I have heard such great things about Pittsburgh,” said Goodman, who was born in Chicago and grew up in New Jersey. “It is a great, great place to live and it’s got a strong Jewish community — which is important to me and my family. We went out there for Shabbos and felt right at home.”

Donna Hudson, board chair of the Zoological Society of Pittsburgh, said Goodman was selected after a global search led by a board committee and executive search company DHR International, because “after having a longtime director, what we really wanted was someone who could come in and hit the ground running.”

“We needed someone who is a change-maker — and Jeremy has a track record of that,” Hudson added. “We were looking for someone who could come in, take all the good stuff and bring it into the future.

When visiting Pittsburgh recently, Goodman paid a visit to Rabbi Daniel Wasserman, who, like Goodman, grew up in northern New Jersey. As the two already have a warm relationship — Wasserman officiated at Goodman’s wedding many years ago — Goodman said he anticipates his family will worship at Shaare Torah Congregation in Squirrel Hill.

“It’s always special when you have a relationship with someone and you haven’t seen them in a long time and you’re able to pick up just where you left off,” Wasserman said.

Goodman and his family “are doers,” said Wasserman, who, coincidentally, is a volunteer scuba diver at the Pittsburgh Zoo — he dives into the tanks to clean…and to entertain passersby.

“It’s my ‘me time,’” Wasserman said. “It’s the only time of the week where my phone doesn’t ring.”

Goodman and his wife, Marina, whom he met during his last year at Tufts, have three children, ages 23, 20 and 16. His 16-year-old daughter plans to attend Taylor Allderdice High School in Squirrel Hill, Goodman said. Marina Goodman is a former financial consultant who now teaches mathematics, and is the author of “Why Should I Stand Behind the Mechitza When I Could Be a Prayer Leader?,” a book about the role of women in Judaism and questions she asked on her own spiritual odyssey.

Goodman’s eldest son has cerebral palsy and autism, and lives with his parents; his younger son was previously involved with the Friendship Circle in New Jersey. Driving down Murray Avenue and seeing the prominent placement of Friendship Circle in Pittsburgh’s Squirrel Hill brought a smile to Goodman’s face, he said.

Rabbi Mordy Rudolph, who heads Friendship Circle in Squirrel Hill, said “so much of what we are trying to accomplish at Friendship Circle is that it’s front and center in the community.” Its prime location “certainly was intentional from our end,” Rudolph said.

“I think the fact that it does help someone feel more welcomed speaks volumes about what Friendship Circle is,” he added.

Goodman, who identifies as “modern Orthodox,” has made concessions in his zoological and veterinary work due to his religious beliefs. While a doctoral student at Tufts, for example, Jewish law prohibited him from spaying, neutering or treating animals on Shabbat.

“In every zoo I’ve worked in, we put protocols in place about Shabbos,” Goodman told Mishpacha magazine last year. “The staff knows I’ll leave the answering machine on, so maybe my wife or I will hear it. I can’t treat animals on Shabbos, but sometimes the staff will drive to my house to ask for direction about what to do.”

Goodman said the Pittsburgh Zoo & PPG Aquarium is a bigger operation than what he leads in Providence — the Pittsburgh zoo’s approximately 70 acres and roughly $20 million budget are “about 70% larger” than Roger Williams Park Zoo.

In Providence, Goodman was also a champion of the Association of Zoos & Aquariums, or AZA; he served as a member of the AZA’s Annual Program Management Committee and is an experienced AZA Accreditation Inspector.

That could prove relevant in Pittsburgh. The Pittsburgh Zoo & PPG Aquarium dropped a nearly three-decade membership with the AZA in 2015 after a disagreement over elephant handling, according to the Pittsburgh Post-Gazette.

Hudson, the Zoological Society board chair, said Goodman “will bring new perspective and experience to advancing our AZA accreditation, renewing our lease with the city, creating and updating exhibitions, and engaging the community in new ways in order to further enhance and grow our zoo.”

Baker, the outgoing president and CEO, will hold the honorary title of president emeritus in recognition of her many contributions to the zoo’s growth and development. She will be available, as needed, to consult with board officers and Goodman through the end of 2022 to ensure a smooth transition. PJC