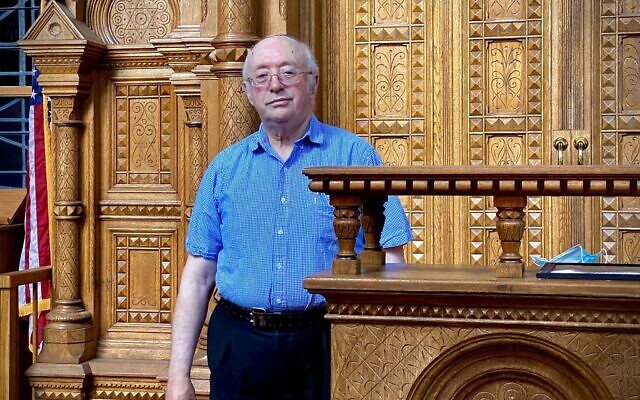 “Five people with split personalities came to shul this morning,” deadpanned Rabbi Stanley Savage. “Does that count as a whole minyan?”

Savage, 71, has spent the past 35 years as the spiritual leader of Beth Hamedrash Hagodol-Beth Jacob, colloquially referred to as the “downtown shul.” At first blush, he is more Borsht Belt-style comedian than typical rabbi. He has a million one-liners and is happy to share, well, all of them.

“That’s what happens when I don’t get my cholent,” he quipped.

The rabbi, who is single – but “available,” he stressed – lives alone on the fourth floor of the massive Orthodox synagogue on Fifth Avenue that he stewards. He serves a dedicated if small group of regulars, as well as professionals who work downtown and need a convenient place to say Kaddish, or travelers staying in nearby hotels.

Before the pandemic, 10 to 20 people normally would show up for morning services; the congregation also would get a minyan for its 5:30 p.m. service most days. But since March, when COVID-19 shuttered synagogues all over America, including his own, Savage has spent a lot of time alone.

“I am here to give solace to others and sometimes I need it myself,” the rabbi said in a fleeting moment of candor.

The synagogue is officially closed these days due to the coronavirus crisis, according to Ira Frank, president of the 145-year-old congregation.

“No one is working in town anymore,” Frank said. “Even if I opened it up, I wouldn’t have a minyan.” Now, when travelers occasionally call to inquire about services, Frank points them to one of the congregations in Squirrel Hill.

Nonetheless, two or three men still show up most mornings at Beth Hamedrash Hagodol-Beth Jacob to pray with Savage – keeping a proper social distance – and to have breakfast. They stream the Zoom service of Congregation Beth Shalom, a Conservative congregation in Squirrel Hill, but daven using their own Orthodox prayer books.

On some mornings, though, it’s just Savage and one other man, North Hills resident Scott Yanoff. The two have been friends for 24 years.

Yanoff moved to Pittsburgh from Boston in the mid-90s and had minimal ties with the Jewish community here. When his father died in 1996, he became “depressed,” he said, and wanted to say Kaddish as a way to heal.

He found Beth Hamedrash Hagodol-Beth Jacob in the Yellow Pages.

“I knocked on the door, and Rabbi Savage answered,” Yanoff recalled. “I told him I lost my dad, and that I was depressed and needed to do Kaddish. He was the first rabbi here I ever met. He took me in. We clicked.”

Since then, the two men have remained close. “He’s been with me through thick and thin,” said Yanoff, 54.

Yanoff is now saying Kaddish for his mother, who died in November, but these days, because there is no minyan at the downtown shul, he sometimes recites the traditional mourner’s prayer solely in the presence of Savage.

“These are some unique times we are dealing with,” Yanoff said. “Let the numbers be what they are. I look at it as it’s better to say Kaddish than not to do it.”

While Savage has some companionship on weekday mornings, he acknowledged that Shabbat and holidays are tough.

“Shabbosim are really something,” he said. Most Saturday mornings, the rabbi is joined by just one man for prayer and kiddish, and the long summer Shabbat afternoons can be difficult.

“Sometimes it’s no picnic,” Savage admitted. “But I have a lot to read, and I’m a good cook.” His specialty, he said, is fish and French fries.

When Shabbat concludes, Savage turns on the television to watch sports. He is a big fan of wrestling in particular and has a cache of colorful stories about Pittsburgh wrestling icons.

The pandemic compelled the rabbi to have solo seders this year, and he will be alone for the High Holidays. Although several invitations have been extended by friends to stay with them for Rosh Hashanah and Yom Kippur, he has declined, preferring the comfort of his own surroundings.

“We aren’t doing anything this year,” said Frank. “The building is closed. I’m afraid to open it up. We are not opening up until there are lots of green lights out there. It’s too hard to worry about the cleaning and the virus safety issues.”

The rabbi, though, is hoping to hold services for Sukkot outside in the shul’s sukkah, where it will be easier to comply with health guidelines. He wants to give his congregants a chance to say Yizkor, the memorial prayer for the dead, he said.

While the pandemic has caused life to become more quiet for the rabbi, it’s not like he never gets out. He can often be seen strolling around downtown Pittsburgh – his chosen form of exercise – where he is recognized and greeted by the professionals still working in the neighborhood. “Lawyers in town, computer people, UPS drivers,” Savage said. “They know I am here by myself.”

Having spent half his life serving the downtown shul, Savage has a “handshake agreement” to stay put at least until he turns 72 – quadruple chai, he pointed out – next year.

Savage readily admits he is “not like other rabbis,” an impression shared by his flock.

“That’s why I always got along with him,” said Yanoff. “He doesn’t always take everything seriously.”

Except when he does.

“It does get lonely sometimes,” Savage confessed. “I do miss the guys here.” PJC