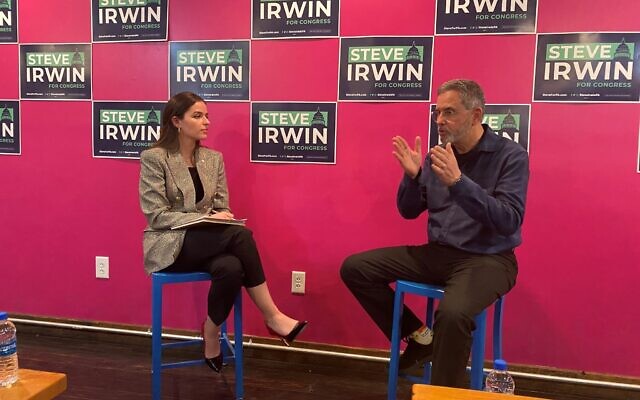 Steve Irwin spoke at a forum organized by the CRC earlier this year. Photo by Jim Busis.

Irwin hopes to win the Democratic nomination to fill the newly created 12th Congressional District. Much of the district is now represented by Mike Doyle, a congressman since 1995, in the 18th district. The new 12th district was redrawn after the 2020 U.S. Census and is comprised of the city of Pittsburgh as well as some eastern and southern suburbs, including parts of Westmoreland County.

During the hour-long discussion, Irwin fielded questions from CRC Director Laura Cherner about why he was running, the current Russia Ukraine conflict, infrastructure, Israel, Holocaust education and other topics important to Jewish voters trying to decide between frontrunners Irwin, Jerry Dickinson and Summer Lee and two other candidates–William Parker and Jeff Woodard.

Irwin said the region has come a long way during Doyle’s 25 years of leadership, but there are still many young people living paycheck to paycheck, and some families that are struggling to send their children to college, grappling with mental health issues and caring for the elderly.

“What does the future of this region look like?” Irwin asked. “Our country is challenged as a democracy, and we’re challenged globally because of climate change, and now geopolitically because of what’s happening in Ukraine.”

Citing the collapse of the Fern Hollow Bridge, Cherner asked Irwin how he would address infrastructure needs.

Irwin pointed to his experience working as a legislative aide to former Sen. Arlen Specter, when one of his responsibilities was infrastructure. He worked on several local projects including the Port Authority T Line to the South Hills and rehabilitating the Bloomfield Bridge.

Discussing the rise in gas and energy prices, Irwin said he is considering supporting a carbon tax.

Moving to foreign policy, Cherner asked Irwin about the conflict in Ukraine and the possibility of a new deal with Iran.
Irwin said he was using his experience as a lawyer to try to get Ukrainian women and children classified as refugees so some of those who are displaced can enter the U.S.

“It’s very complex, but we need to be committed to spending money to try and protect them because Putin’s not going to stop there,” he said.

Irwin said the country is less safe today because of former President Donald Trump’s exit from the Iran deal but that keeping Iran from acquiring nuclear weapons was imperative.

The congressional hopeful rebuked recent accusations by Amnesty International that Israel was guilty of apartheid and a recent decision (since reversed) by the Sierra Club to stop trips to Israel.

“This, in my mind, is BDS [the boycott, divest and sanctions movement against Israel) and it’s not helpful,” Irwin said. “They are statements that undermine Israel’s right to exist. Israel is a pluralistic society … Israel has a right to exist, and I’ll do everything to make sure Israel’s here.”

Discussing BDS and antisemitism, Irwin cited his time as chair of the Federation’s CRC and his involvement with the Anti-Defamation League. He stressed the need to continue to offer funding and assistance to Jewish organizations, as well as ongoing education to combat hate.

Irwin addressed his recent campaign controversy in which it was discovered that one of his petition circulators appeared to have forged some signatures. Those actions, he said, were “an incredible breach of trust.”

The person responsible was the only paid employee collecting signatures, he said. After an internal investigation, that person was fired and their name was turned over to the district attorney’s office for possible prosecution.

Irwin said that his campaign collected more than 2,000 signatures and that only 1,000 are required to get on the ballot.

Cherner closed the question-and-answer session by asking about identity. Irwin, she noted, is Jewish, but he is perceived by many outside of the Jewish community as white. He is running against a Black man and a Black woman for the congressional seat.

Irwin said that when he moved to Pittsburgh after living in Washington, D.C., he was surprised to see the city’s segregation. He told his wife he was unable to stay in the region if they didn’t work to bring changes.

After acknowledging the significance of his opponents’ candidacies — especially Summer Lee’s — Irwin said he went through a period of self-examination.

“I feel that the United States is more polarized than ever,” Sokol said. “It would be refreshing to see somebody who is willing to reach across the aisle and maybe even provide some hope that it’s not us versus them, ‘they’re evil, I’m not,’ especially considering that his primary competitor seems to be someone that may fit into a category of a Squad member.”

Cherner said that after Doyle served the region for so long, it was important for the community to hear from candidates who might represent them in Congress.

“You know, we have this growing political divisiveness,” she said. “The district has changed a little bit, so representation may look a little different. You have three dynamic candidates. It’s really important that the Jewish community gets an opportunity to meet them.”

The CRC will host a town hall with Summer Lee on Monday, April 4.PJC