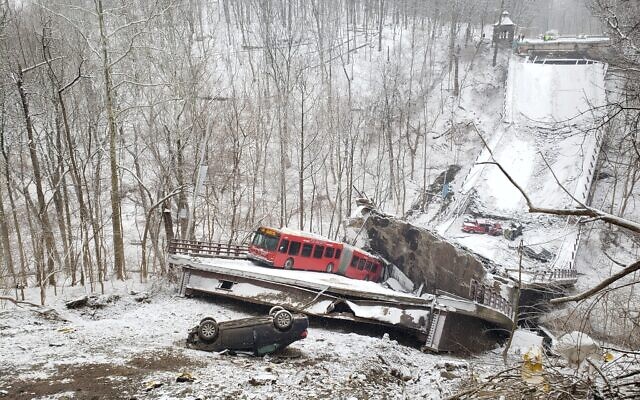 It was 6:39 a.m., and Zionts first thought snow was falling from her roof. The sound didn’t stop though, so she wondered if the noise was coming from a snowplow on her street.

Zionts opened her window and smelled gas, then received a message from a neighbor indicating there was a gas leak. She quickly began a pre-established routine — a 10-minute evacuation plan her family developed after Hurricane Katrina.

Zionts retrieved a suitcase, her passport, a change of clothes, dog food, extra blankets for her dog and the dog. As she headed out of her home, a firefighter had already arrived on her street, Briar Cliff Road, telling people to evacuate. Zionts and her dog got in her car. She drove to a gas station and filled her tank.

“It’s an old survival mechanism,” she said. “I’m Canadian, so I know there’s certain things to do.”

She then drove to Schenley Park and walked with her dog, while her phone exploded with texts and calls. It was then she learned that the Fern Hollow Bridge — a bridge she drives across twice daily — collapsed near her home. The distinctive smell she noticed earlier came from a gas leak caused by the bridge collapse. 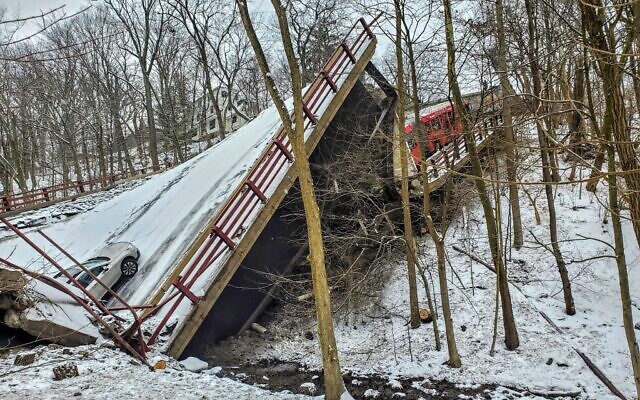 Allegheny County Executive Rich Fitzgerald, who visited the site of Friday’s calamity, said a report of the bridge’s collapse came in around 6:40 a.m.

As of press time, 10 people had suffered minor injuries related to the collapse, and there were no casualties. Had the bridge collapsed 30 minutes later, Fitzgerald said, the event could have taken on greater severity, as there likely would have been more drivers, joggers and people walking their dogs nearby.

Councilman Corey O’Connor said he was surprised by the collapse, as the bridge was inspected in September. He called the inspection standards “too low” and said there needs to be a determination as to why the collapse occurred.

Fitzgerald noted that President Joe Biden was scheduled to visit Pittsburgh on Friday to promote his infrastructure bill, and that the bridge collapse proves the necessity of federal investment in infrastructure.

“We know as an older industrial city with a lot of old bridges, and a lot of old infrastructure, that we need this,” Fitzgerald said. “And this president, to his credit, has been the first president in decades, Democrat or Republican, that has been able to get a major infrastructure investment in this country.” 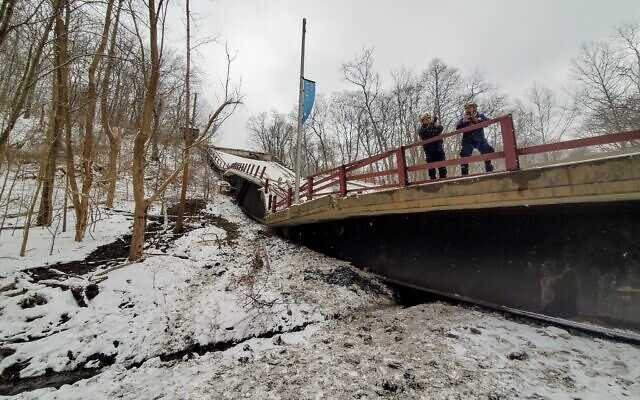 Biden visited the site of the bridge collapse Friday afternoon, shortly after arriving in Pittsburgh.

“I’ve been coming to Pittsburgh a long time,” Biden said, noting the large number of bridges in the city. “And we’re going to fix them all.”

When he arrived at the site of the collapse Biden was greeted by Police Chaplain Rabbi Elisar Admon, who on behalf of the first responders and officers blessed the president and the United States of America and thanked Biden for his visit.

Admon told the president how miraculous it was that only a few people were injured, and Biden agreed, the rabbi told the Chronicle.

Biden praised Pittsburgh’s emergency response teams, Admon said, and also shared his familiarity with the city and his love of the commonwealth during a 15-minute conversation.

“When the president came, I thought that he was just going to shake our hands and continue on, but the time we spent together was very nice,” Admon said. “He didn’t rush. He was very humble.”

Admon described the gift and his conversation with the president as “remarkable.”

“I was very excited to meet the president,” he said. “That’s something that doesn’t happen every day. Maybe it happens once in a lifetime.”

“It looks crazy. It looks scary,” Admon said of the scene.

Despite earlier reports that the eruv — a wire and string-bound structure that creates an enclosure and permits Jews to carry items and push strollers during Shabbat — was dismantled by the bridge collapse, Silver confirmed that the structure was still intact. 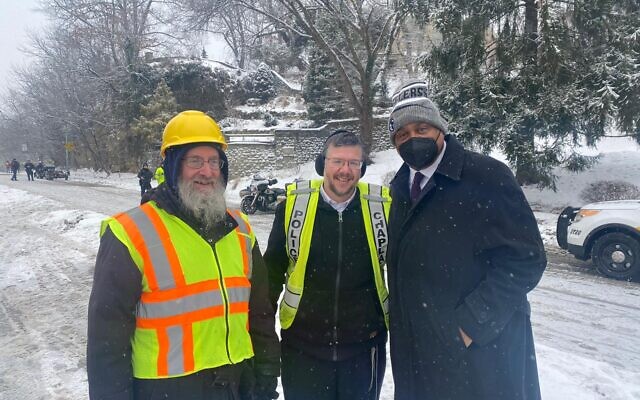 Silver said he immediately became emotional when he saw the collapsed bridge, as one day earlier, he drove over it to check the eruv and ensure that all of the wires, strings and other pieces were secure.

Now, a day later, the bridge is in ruins.

With Shabbat just hours away, Silver said the community can rely on the eruv for now, but work will need to be done to the enclosure as soon as bridge repairs begin.

“We will have to do a reroute, and the checking will be twice as hard because we can’t get across the bridge,” he said.

The eruv budget is $45,000 a year, with costs going to pay qualified electricians for repairs, as well as to individuals who check the enclosure regularly, Silver said. It’s difficult to raise money for the eruv, but if 500 people paid $90 annually, the cost would be covered, he added.

Silver wasn’t sure what new expenses might be created once bridge repairs begin. For now, however, he is amazed at the miraculousness of the morning’s events, saying, “Sometimes Hashem opens a window and lets you look in.” PJC