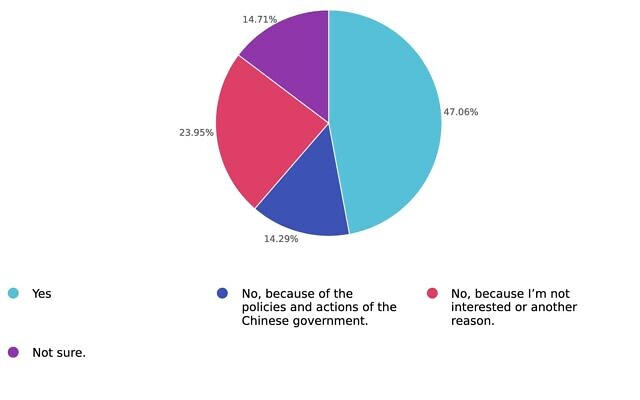 Last week, the Chronicle asked its readers in an electronic poll the following question: “Will you watch the Beijing Olympics?” Of the 239 people who responded, 47% said yes. Twenty-four percent said no, because they were not interested or for another reason; 14% said they would not be watching because of the policies and actions of the Chinese government; and 15% said they were not sure if they would be watching. Forty-two people submitted comments. A few follow.

In addition to the Chinese government, I’m not watching because the Olympics shouldn’t be happening at all during a worldwide pandemic!

I always enjoy the Olympics. I do wish that they were somewhere other than Beijing. The USA athletes deserve our support even if the reprehensible host country does not.

I just hope it’s a peaceful time for the Olympians. They have been preparing for this for a long time and I would hate to see something happen to prevent it. This is their time to shine, and I’m looking forward to watching them.

We say, “never again,” about the Shoah. As Jews, we cannot tolerate the severe oppression of others, such as the Uighurs, by the Chinese government. While I sympathize with the athletes, the U.S. and other countries should have pulled out completely.

I virtually never watch television, with the exception of the last part of a Steeler game. My life is full of important things and Olympics don’t make it to that list for me.

I probably will watch some but certainly not all.

This is to glorify a repressive country…a rehash of the Nazi Olympics.

Most likely, I won’t be watching the Olympics since I’m a millennial with a Netflix account who doesn’t watch much live TV. The fact that the Olympics are also taking place in China, where the pandemic ostensibly began (and was mismanaged), is also not a great look.

I always try to watch the Olympics, because I love seeing the different sports and the people from all different countries.

I have never been interested in the Olympics. I get annoyed when I can’t watch my TV shows. Why can’t they broadcast them on a sports channel?

The Olympics is one of the great global events!

May watch a bit, but not that much… I don’t want in any way to support the Chinese government. It’s a shame for the Olympians, but the IOC really screwed up by awarding the games to China.

I think it is fine for the athletes to compete and meet each other. But I always am turned off by the pomp and politicization of the Olympic games. And when the games are hosted by an authoritarian government in the midst of a genocide, I don’t see why anyone would want to support the economic and political agenda of these games.