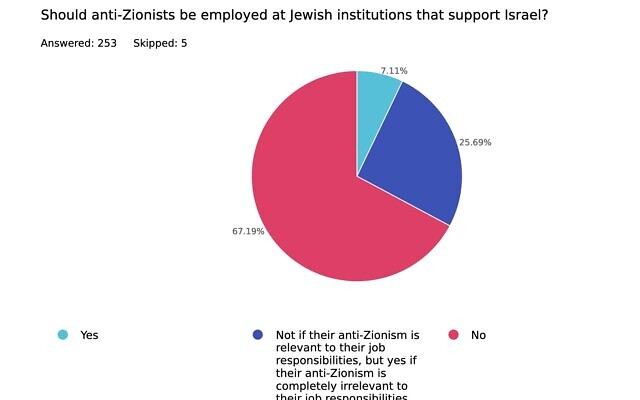 Last week, the Chronicle asked its readers in an electronic poll the following question: “Should anti-Zionists be employed at Jewish institutions that support Israel?” Of the 258 people who responded, 67% said “No,” and 26% said “Not if their anti-Zionism is relevant to their job responsibilities, but yes if their anti-Zionism is completely irrelevant to their job responsibilities.” Only 7% said “Yes.” Seventy people submitted comments. A few follow.

The greatest story of an indigenous people returning to their ancestral homeland is the story of the Zionist Jew. The anti-Zionist seeks to undermine the Jewish right to self-determination in that homeland at every opportunity. They should not be working for any organization that supports Israel.

Would the NAACP hire a member of the KKK even to answer the phones? Would the Democratic National Committee hire a Republican even to stuff envelopes?

The idea of employing anti-Zionists at Jewish institutions that support Israel is absurd and would border on laughable were it not so overtly self-destructive.

Anti-Zionism is antisemitism. Anti-Zionism isn’t theoretical, it’s a view with practical consequences if it is implemented. Those practical consequences include the end of Israel as a Jewish state and place for refuge for Diaspora Jews. Of course we should not hire those who would advocate or approve of the destruction of the Jewish state (and it’s 6-7 million Jewish citizens) and the end of having a place of refuge for all the Diaspora Jews who continue to flee violent manifestations of antisemitism all over the world.

Precisely what is an anti-Zionist? I oppose some of the government’s expansion programs to the detriment of Arab families, and the favoritism governments sometimes show to the Orthodox. However, I do not oppose the existence of Israel as a nation and, on the contrary, strongly support it now as I have from its inception. Am I an anti-Zionist? Some say “yes.”

Even if the job description is neutral — like teaching math for example — but Zionism is intrinsic to the corporate identity of the organization that is hiring the math teacher, then this is not the right place for an anti-Zionist activist to be employed.

It really depends on how their anti-Zionism manifests.

Anti-Zionist positions come from a place of incredible privilege. Unfortunately, Jews have been excluded from nearly every national project in human history. The USA is an exception to the rule. Most Jews do not have the privilege of American citizenship. For them, Israel is their home, if not a real and a compelling plan B if things go south, as they so often do for Jews, unfortunately.

The voices of anti-Zionists need to be heard in intimate settings by Zionists such as myself so that we can sharpen our support of the State of Israel. Being made to hear and respond intelligently to anti-Zionists helps move us from being blindly supportive of our Jewish homeland to being capable of a Zionism based in clear critical thinking. We all win in the process.

Is there a fear that anti-Zionists will invade Jewish communal institutions and destroy them from within? Why even entertain such a paranoid idea? People are entitled to their opinions and, as employers, Jewish institutions have no legal or ethical right to require a litmus test for employment.

I find this whole discussion to be toxic and representative of the institutional Jewish community’s misplaced fears of young people.

The tent should be as big and welcoming as possible.

It would be hard to make the case for allowing anti-Zionists to be in a teaching or management position in Zionist institutions, but to be employed in positions that do not directly involve the mission of the institution vis-a-vis Israel, people should certainly not be excluded based on their beliefs. I cannot imagine that this would be good for office morale, however, particularly if the anti-Zionist employee is very vocal. PJC