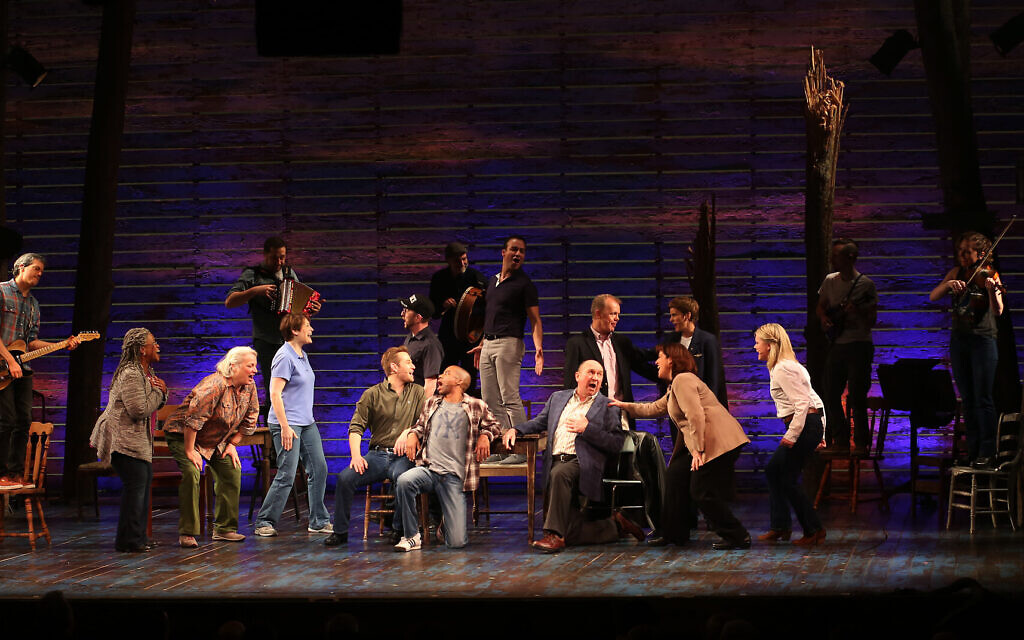 "Come From Away" at the Gerald Schoenfeld Theatre on Broadway. (Apple TV+)

(JTA) — Thanks to safety measures such as vaccination and mask requirements, Broadway shows are playing again after a shutdown that lasted a year and a half, the longest in Broadway history.

The first show to open was the Bruce Springsteen concert “Springsteen on Broadway” in June, followed by Antoinette Chinonye Nwandu’s play “Pass Over” in August. Those two limited engagements have closed, but there are now 26 shows running on Broadway, with more set to open or re-open in the coming months.

Many of the shows flipping their lights back on, or for the first time, have Jewish content — from straight plays to musicals, dramas to comedies. Here are seven shows to see with Jewish themes, characters, and/or authors. 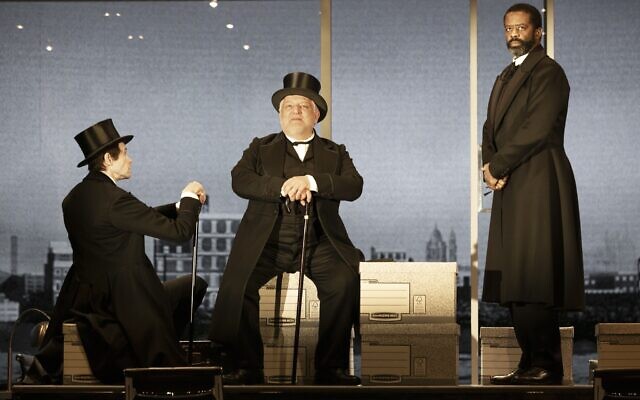 This 2014 epic play by Italian playwright Stefano Massini, adapted into English by Ben Power, spans 163 years as it traces the history of the Lehman Brothers, both the family and the beleaguered financial services firm: from its beginnings as a fabric shop founded by the German-Jewish immigrants in 1844 Alabama (where the Lehmans made their first fortune buying and selling slave-harvested cotton) through its instrumental role in the 2008 financial crash that destroyed the business (along with millions of American livelihoods). The production, directed by Sam Mendes, features an extraordinary rotating office set designed by Es Devlin, stunning IMAX-level projections by Luke Halls and performances from Simon Russell Beale, Adam Godley and Adrian Lester.

Though Massini is Catholic, he has a fascination with Jewish culture and speaks Hebrew — which might explain why there is occasional Hebrew in the play, as well as a focus on how Jewish immigrant families lose their traditions over time as they assimilate in America. Particular attention in the play is paid to Jewish mourning rituals… appropriate for a play that often seems to be mourning the death of the American dream on the altar of unchecked capitalism.

Bottom line: See it if you are interested in American history and capitalism, and don’t mind sitting through a show that is three hours and 20 minutes long (there are two intermissions).

This is the first revival of the sung-through musical that opened on Broadway in 2004, the same season as “Avenue Q” and “Wicked.” It tells the story of Caroline Thibodeaux, a Black maid for a Jewish family in 1963 Louisiana, as she and her employers respond to the rapidly advancing Civil Rights movement; the show, which opens with a Confederate memorial being torn down, will likely resonate with audiences in entirely new ways in 2021.

The book is by celebrated Jewish playwright Tony Kushner (“Angels in America”), with a score by Jeanine Tesori (“Fun Home”) that incorporates klezmer and traditional Jewish melodies, as well as Motown, soul and other sounds of the era. It also might be the only Broadway musical with a Hanukkah song (“The Chanukah Party,” which uses an alternate spelling of the holiday). Sharon D. Clarke reprises her Olivier-winning performance in the title role, and the cast includes Jewish actors Caissie Levy (“Frozen”), Chip Zien (“Into the Woods”) and Stuart Zagnit (“Newsies”).

Where and when: Currently in previews at Studio 54, 254 W. 54th Street; officially opens October 27.

Bottom line: See it if you like musicals that are more introspective than showy spectacle, or if you are interested in the Civil Rights movement.

In this comedy by Douglas Lyons, sisters Baneatta (Cleo King) and Beverly (Ebony Marshall-Oliver) gather their families to mourn their father and celebrate his life at his funeral. Directed by Zhailon Levingston, who made history as the youngest Black director ever on Broadway, the production-in-the-round gives the audience the experience of being at a Black church. Michael Urie plays Logan Leibowitz, the Jewish boyfriend of Kenny Mabry (Devere Isaac Rogers), Baneatta’s son. Logan is the only white character, acting as a stand-in for the white members of the audience. He asks questions during the service that some audience members might be thinking, but he is not just there as an outsider: His relationship with Kenny is shown to be a positive one and (spoiler alert) he is eventually accepted by the family.

Where and when: Playing through January 2 at Circle in the Square Theatre, 235 W 50th Street.

Bottom line: See it if you are in the mood for a sitcom-style comedy.

After the planes crashed into the World Trade Center on Sept. 11, 2001, the U.S. airspace closed, forcing 38 planes to be diverted to the Gander airport in Newfoundland, Canada. The people of Gander took in the “plane people” until they could get back in the air. This long-running musical, using the true stories of those who were there, shows what happens when people are kind to each other in the darkest of times.

The writers of the show, Canadian couple David Hein and Irene Sankoff, are Jewish and drew on their backgrounds to expand on the very Jewish theme of welcoming the stranger. There’s also an explicitly Jewish moment in the show, where people of different religions pray at the same time in different languages, with a rabbi character (based on a real rabbi whose flight was grounded that day) singing “Oseh Shalom.” During that scene, one of the locals opens up to the rabbi about his Jewish past.

Where and when: Currently playing at the Gerald Schoenfeld Theatre, 236 W. 4th Street.

Bottom line: See it if you like upbeat musicals based on true stories about people coming together.

In Stephen Sondheim’s classic musical, first staged in 1970, protagonist Bobby turns 35 by trying to explain to all his married friends why he isn’t married. This gender-bent revival, first staged at London’s West End in 2019 and directed by three-time Tony winner Marianne Elliott, flips the script: Bobby is now a woman named Bobbie, played by Katrina Lenk — who, between a breakthrough part as an Israeli cafe owner in “The Band’s Visit” and a one-time stint as a gender-swapped Tevye in “Fiddler on the Roof,” has cornered the market on Jewish stage roles for non-Jewish women.

Sondheim, one of the greatest and most important composers in the history of American musical theater, is Jewish… and what’s more Jewish than a show about neurotic New Yorkers? There is also an interfaith couple in the show, one-half of which is played by Israeli-American actor Etai Benson (“The Band’s Visit”). Another selling point for Broadway fans: The show’s co-star, stage legend Patti LuPone, also participated in a star-studded concert production of “Company” in 2011.

Where and when: Starts previews November 15 with an official opening of December 9 at the Bernard B. Jacobs Theatre, 242 W 45th Street.

Bottom line: See it if you are a fan of Stephen Sondheim, Patti LuPone or new interpretations of classic shows.

Girl From the North Country

The characters in this jukebox musical — set in Duluth, Minnesota during the Great Depression — aren’t Jewish, but the show is shaped around the music of Bob Dylan, whose Jewish upbringing and consummate everyman folk persona have long fascinated critics and biographers. Wanderers come and go through the boardinghouse of Nick and Elizabeth Laine (Jay O. Sanders and Mare Winningham); Irish playwright Conor McPherson wrote the book, and 20 classic Dylan tunes are performed in a reinvented context as Depression-era folk ballads, with beautiful arrangements by Simon Hale.

Where and when: Currently playing at the Belasco Theatre, 111 W. 44th Street.

Bottom line: See it if you love Bob Dylan and want to hear his songs in a new way. 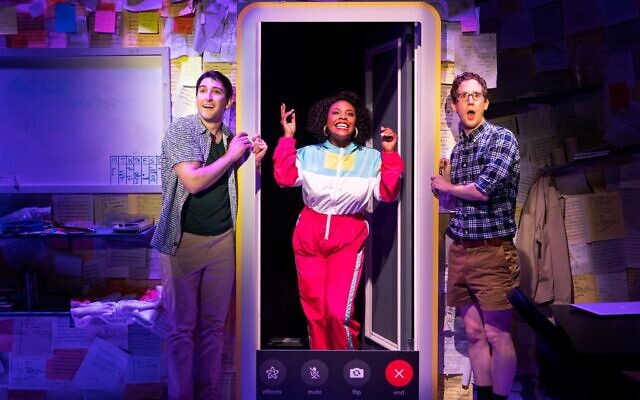 Ben Fankhauser, Bryonha Marie Parham and Alex Wyse in a scene from “A Commercial Jingle for Regina Comet.” (Photo by Matthew Murphy)

A Commercial Jingle for Regina Comet

This one is technically Off-Broadway, but any musical that mentions Sukkot deserves a spot on this list. The music, book and lyrics are by Jewish writer-actor duo Ben Fankhauser and Alex Wyse, who also star. They play a Jewish songwriting team tasked with writing a jingle for a new fragrance for the fictional pop star Regina Comet (Bryonha Marie Parham). The two frequently refer to their start writing Shabbat musicals at Jewish summer camp, and much of the humor in the show is of the Borscht Belt variety.

Where and when: Playing through November 21 at DR2 Theatre at Union Square East, 103 E 15th Street.

Bottom line: See it if you need a silly, escapist musical comedy. PJC