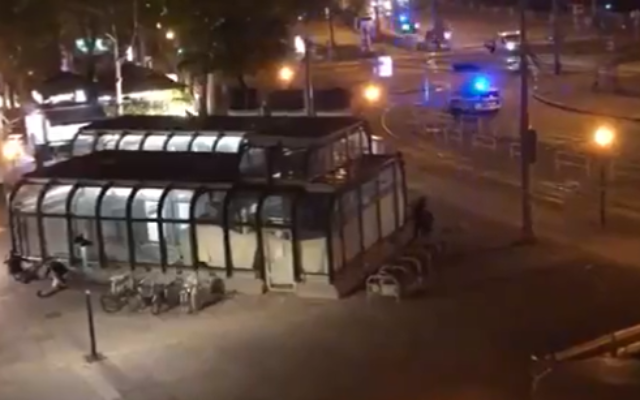 The scene of a shooting incident near a synagogue in Vienna, Austria, November 2, 2020. (Screenshot: Twitter via Times of Israel)

Terrorists opened fire at several sites Monday evening in central Vienna, including in the area of a major synagogue and the offices of the Jewish community, killing up to seven people, according to Austrian media reports. Several suspects were still at large after midnight, Austrian authorities said.

Austrian Chancellor Sebastian Kurz and Interior Minister Karl Nehammer both said the incidents were a terror attack with multiple perpetrators.

Vienna police confirmed there were six sites of attack — all in the city’s first district, within 10 minutes’ walk from each other — with multiple attackers. Police initially confirmed one death and one terrorist killed.

Eyewitnesses said dozens of shots were fired in the area of Schwedenplatz, a square located opposite the Carmelite Quarter, where several synagogues are located. The assessment in the Jewish community was that the attack was not directed at Vienna’s Jews, however. Oskar Deutsch, head of the Jewish community in Vienna, told the Kurier news site that none of the city’s Jewish institutions appeared to have been hit. He said there were no casualties among the Jewish community.

The Kurier newspaper said at least one of the fatalities was a police officer. Reports said at least 15 wounded people were taken to hospitals in what is seen as the worst attack in Austria in years.

The shooting began just hours before Austria was to reimpose a coronavirus lockdown to try to slow the spread of COVID-19, and bars and restaurants were packed as people enjoyed a final night of relative freedom.

Police instructed the public to leave the city’s first district, where the attacks occurred. Cops were barring vehicles from nearing the area, Kurier reported.

“We will never allow ourselves to be intimidated by terrorism and we will fight these attacks resolutely by all means,” tweeted Kurz. “The whole country is thinking of the victims, the injured and their families, to whom I express my deepest condolences.”

A video showed at least four apparent perpetrators being rounded up by police and arrested, but reports indicated that more were still be at large.

In addition, reports said there had been an explosion, with one of the assailants possibly blowing himself up. Vienna Mayor Michael Ludwig said the attacker who was killed is suspected to have worn an explosive belt.

Special forces were put on standby to respond to any further violence, with officials saying they couldn’t estimate the likelihood of more attacks. The federal army was sent out to protect foreign embassies and other high-profile sites.

Frequent sirens and helicopters could be heard in the city center as emergency services responded to the incident. Large numbers of police were guarding an area near the city’s world-famous opera house.

Videos circulating on social media showed multiple attackers firing shots, and assailants and cops shouting, as frightened residents looked on from their windows.

Deutsch noted that the Stadttempel synagogue and the community offices were closed at the time of the shooting, and asked all community members to stay away from the area.

Jewish residents were reportedly urged to stay in their homes, lock their doors and take off their kippa skullcaps when outside.

Rabbi Schlomo Hofmeister told The Associated Press that he saw at least one person fire shots at people sitting outside bars in the street below his window.

“They were shooting at least 100 rounds just outside our building,” Hofmeister said.

“All these bars have tables outside. This evening is the last evening before the lockdown,” he added. “As of midnight, all bars and restaurants will be closed in Austria for the next month and a lot of people probably wanted to use that evening to be able to go out.”

Shalom Berenholtz, who owns a restaurant in the area, told Israel’s Army Radio: “This is the nerve center of the Jewish community. It is an area secured 24 hours a day.”

He said one of the gunmen ran along the street near the synagogue opening fire with an automatic weapon.

Berenholtz added that on Sunday night, all the restaurants in the area had been open, but some were closed Monday because of new lockdown regulations were coming into effect.

Israel’s Diaspora Affairs Minister Omer Yankelevich tweeted: “Our thoughts and prayers are with Austria in these tragic and very hard hours.”

“Our thoughts and prayers are with the Austrian population due to this terrible terror attack in Vienna,” tweeted Israel’s Ambassador to Austria, Mordechai Rodgold. “Our sympathies to the families of the victims. In these difficult hours, Israel stands with Austria in full solidarity.”

In September, Kurz announced that the Austrian government and the Jewish community had signed an agreement that would see federal funds to secure Jewish institutions increase threefold.

“The last weeks have shown that we have to act together to protect Jewish life in Austria even more determinedly,” Kurz wrote on his Twitter profile. “That’s why we as a state will support the Jewish community with its increased security costs.”

According to the agreement, which will be anchored in legislation, the Austrian government will pay €4 million (NIS 16 million, $4.7 million) to the Jewish community every year.

“With this historic step the Austrian government is manifesting Jewish life as a natural and inseparable part of Austria,” Deutsch wrote in a letter sent to community members at the time.

The community has reached a “historic agreement with the federal government of Austria to safeguard and foster Jewish life in the long term,” he said. PJC

This article originally appeared in the Times of Israel, a publication affiliated with the Pittsburgh Jewish Chronicle. Agencies contributed to this report.