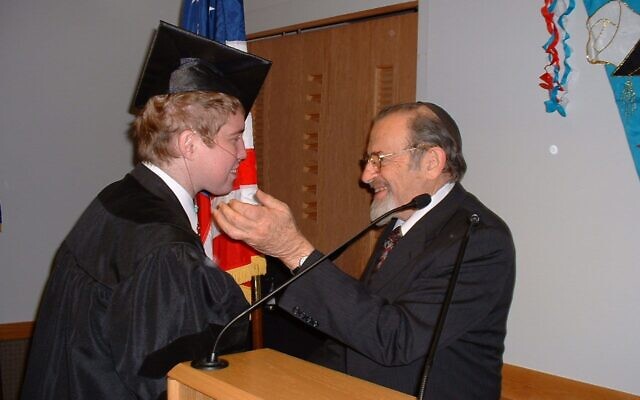 Mikey Butler’s memory will live on, thanks to a new scholarship announced by Yeshiva University.

It was the dream of Butler, who grew up in Pittsburgh, to attend the Orthodox-inspired college despite his struggle with cystic fibrosis, asthma and the lymphoma he developed after a lung transplant, his parents said.

But unlike his friends who dreamed of future families and careers, Butler’s dreams ended with attending YU.

“He said if he could make it for even one semester, he would have achieved his goals,” his mother, Nina Butler, recalled.

Mikey Butler was able to do more than make it through one semester: He earned a bachelor’s degree in political science and business from the university.

The scholarship is a tribute to Mikey Butler’s love of the school and the close relationship he built with its professors and deans, his parents said.

Dan Butler, Mikey Butler’s father, told of his son’s time at Yeshiva in a story published in Tablet in 2020.

Accepted at YU, Mikey Butler attended one week of classes before he had to return home and be admitted into the hospital. Two weeks later, the freshman returned to New York to collect his belongings, convinced there was no way to achieve his dream while managing the cystic fibrosis rocking his body.

Instead, his father recounted, Mikey Butler found a note on his door telling him to see the school’s dean. When he did, the dean said, “Young man, you are going to graduate from Yeshiva University. Whatever it takes, we will get you through.”

The school made accommodations for the freshman, allowing him to live on the ground floor of his dorm and assigning him a reserved parking space.

Mikey Butler spent the next four years alternating, on average, three weeks at school and three weeks home in Pittsburgh. While his college life was different than the typical undergraduate’s, he shared many of the same experiences — including being elected student body vice president.

Nearing the end of his four years at Yeshiva, Mikey Butler’s respiratory system was too ravaged to remain at the school. Several weeks later, while in a hospital ICU, waiting on a lung transplant, the head of Yeshiva University, Rabbi Norman Lamm, flew to Pittsburgh and awarded Mikey Butler his degrees at the Pittsburgh International Airport.

After a double lung transplant, Butler was able to return to New York and walk in his graduation ceremony at Madison Square Garden.

Tragically, he developed lymphoma from the lung transplant. As a result of his treatment, Mikey Butler became the first person with cystic fibrosis and a lung transplant to go through chemotherapy and a stem cell transplant. It was those rigorous treatments and medications, his mother said, that caused him to lose his sight and hearing.

For Mikey Butler, a drummer who loved playing at NCSY events and friends’ weddings, his loss of hearing was harder than the loss of sight.

“His attitude was what made him special,” she said. “‘I have cystic fibrosis; cystic fibrosis doesn’t have me,’ he said. “Mikey milked life for all it was worth, every day, is why he had a standard answer when asked how he was feeling: ‘Baruch HaShem yom yom— day by glorious day.’”

Some of Mikey Butler’s happiest times were spent at YU, Nina Butler said, and their entire family appreciated that the school’s faculty members were well-versed in both Judaic and secular studies.

“Mikey’s brother Gavri, two years younger and also at YU, told us that on 9/11, his biology teacher saw people walking across a bridge, out of Manhattan,” Nina Butler said. “He told the class he couldn’t teach biology today and instead picked up a copy of Talmud and taught from it.” Mikey was back at Shadyside Hospital that day but asked his brother to take his stockpile of medical equipment from his dorm room to triage at the Javits Center.

YU’s new scholarship will be established on Jan. 26, marking Mikey Butler’s 18th yahrzeit, and will be awarded to a student from outside the tri-state area who did not have the opportunity to receive a Jewish day school education, the university announced in a press release. The award each year will total approximately $10,000.

Mikey Butler’s legacy continues to be felt in Pittsburgh as well. His family created the nonprofit Bikur Cholim of Pittsburgh: Friends of Jewish Patients, a volunteer-based organization that provides for the material and spiritual needs of those facing medical-related challenges and their families in the Jewish community.

“All those that knew or interacted with Mikey know what a blessing he was,” Shulkes wrote in a statement to the Chronicle. “With the promulgation of this new scholarship in his memory, his name will continue to be a blessing to all those that hear it. YU is so proud to be able to offer this scholarship.”

Mikey Butler’s parents said the scholarship is another example of the life their son lived.

“Although his life was short, he accomplished much,” his mother said. “He created goodwill in so many ways and inspired people to live ‘day by glorious day,’ celebrating each moment of life as a gift. It sounds corny, it sounds simple, it sounds unattainable, but it is none of those things. Mikey proved that.” PJC